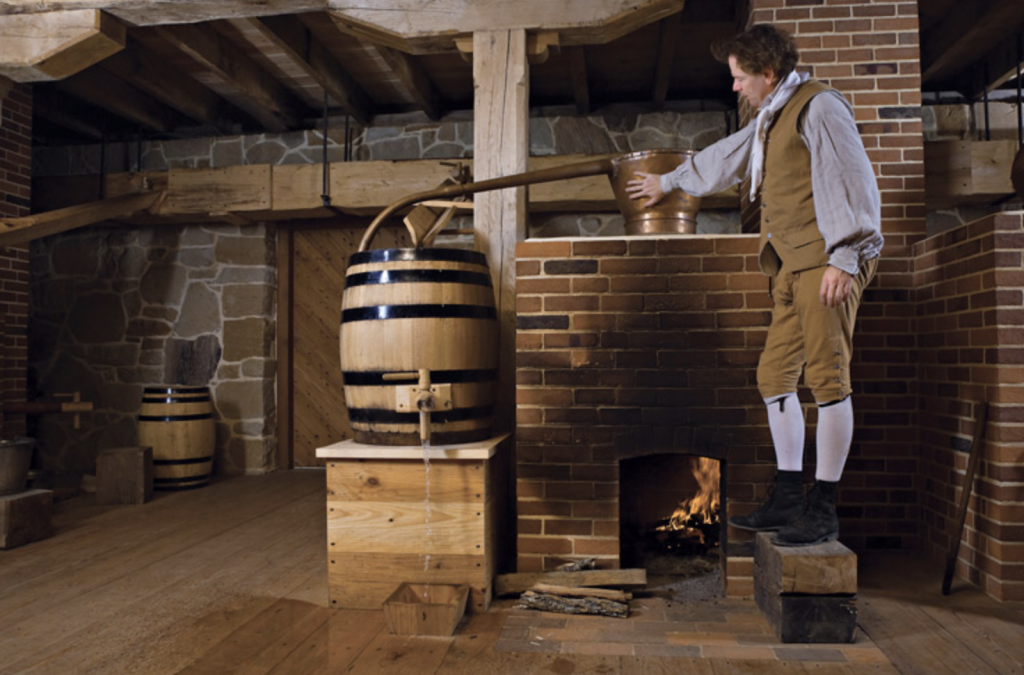 Whiskey in the late 18th Century was not only a drink, but a commodity. Outside the towns along the Atlantic Coast, farmers turned surplus corn, wheat, barley, and rye into whiskey. Each family had their own recipe, some, one can assume tasted better than others and stills varied in size and production. A jug or a barrel of whiskey was something tangible that could be traded for a plow, or a horse, or whatever else the farmer needed.

In 1791, the newly ratified Constitution gave the Federal government the power to levy taxes which is a power that the Articles of Confederation did not provide. The central government assumed a $54 million liability (~$1,560,806,809 today) from the Continental Congress. This debt was a left over from the loans and bonds issued during the American Revolution to finance the fight against England. Alexander Hamilton’s 1790 Report on Public Credit convinced the Congress to find additional ways to raise money beyond the customs duties it was already collecting.

The Congress passed the Whiskey Act of 1791 to raise money because whiskey stills were in every one of the 13 states and they were plentiful. Rather than tax whiskey by the gallon, Congress levied a flat tax on each still, regardless of its size. On a cost per gallon basis, the tax cost the smaller distillers more because the tax was distributed over fewer gallons.

This new tax was unpopular from the moment it was passed. Opponents of the tax used the same rationale used in the days leading up to the American Revolution. This tax, they claimed, was “taxation without representation.” Those who resisted paying the tax claimed our Congress was doing the same thing that the British Parliament did with its Intolerable Acts of the 1760s and early 1770s.

Citizens who owned stills simply refused to pay the tax. Many tax collectors were physically threatened and several were tarred and feathered. Much of the resistance was centered in Western Pennsylvania.

President George Washington realized this was more than citizens not wanting to pay an unpopular tax. This was a challenge to the power of the central government and by 1794, Washington was faced with an open rebellion by armed citizens.

Under the powers granted him in the Militia Act of 1792, Washington called out the state militias. Combined, the governors of Virginia, Maryland, Pennsylvania and New Jersey put 13,000 men at the disposal of the president.

Thankfully, there was no confrontation. The rebels disbursed before the militia force arrived. However, the rebellion has an interesting legacy.

One, it reinforced the power of the central government to levy taxes. Two, the Militia Act of 1792 gave the president the power to call out the state militias in the case of a “national emergency.”
Three, peaceful protests of government laws or actions under the freedom of assembly granted in the Constitution were acceptable, but radical/violent protests were not. And last, it accelerated the process of creating political parties. One group wanted a strong Federal government. They were the Federalists.

The other, led by Thomas Jefferson, started the party called the Democratic-Republicans. They wanted a smaller, less powerful central government. In 1801, after Jefferson’s Democratic-Republicans came to power, they repealed the Whiskey Tax. However, this was not the last of the wine, beer and whiskey taxes in the U.S.

Image is a replica in Colonial Williamsburg of George Washington’s Whiskey distillery that produced 11,000 gallons of whiskey in 1798!

Posted in Blog, U.S. Politics and tagged Tax on whiskey leads to a stronger central government