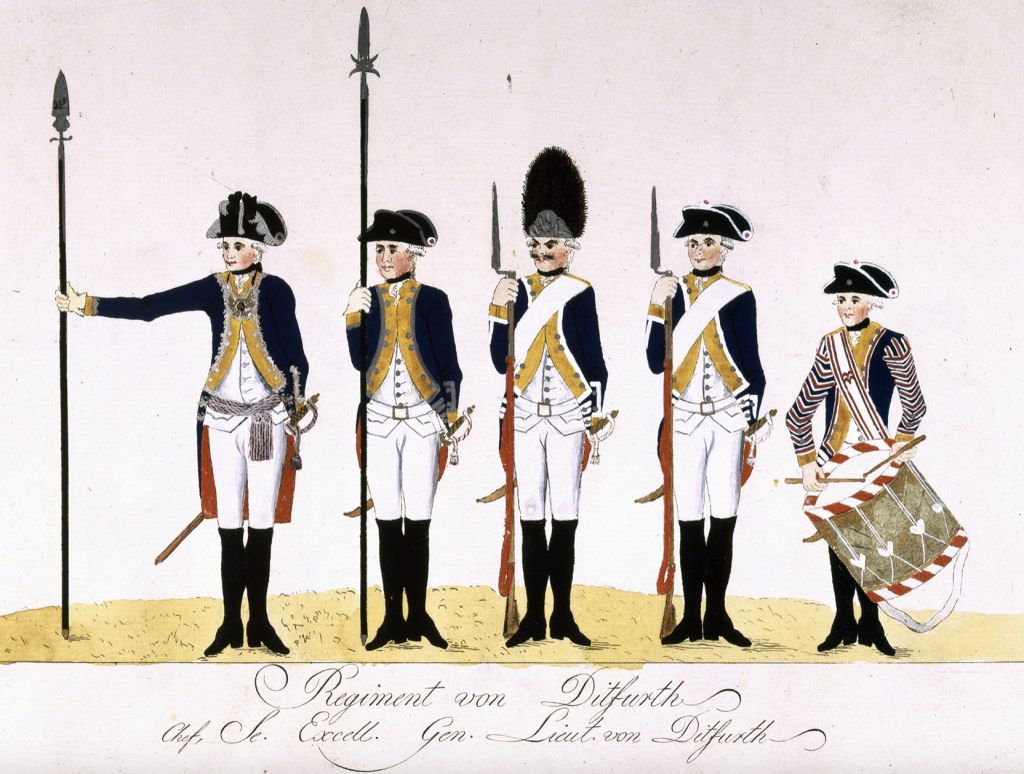 Hessians is the generic word used to describe the 28,500 soldiers from sis different principalities that were part of the British Army during the American Revolution. To be more precise, the Germans came from  Hesse-Kassel (~17,000), Brunswick (~4,300) Hesse-Hanau (~2,500), Ansbach-Bayreuth (2,400), Anhalt-Zerbst (~1,200) and Waldeck (~1,200). When the war broke out, England didn’t have a large enough population to provide the troops necessary to put down the rebellion, so they turned to a proven source, the Germans.

Our history texts often refer to the German soldiers as mercenaries. By modern definitions, the Germans employed by the English were not mercenaries but “auxiliaries” since they were provided as a group or military formation – infantry, artillery, cavalry, etc. – by a nation-state. By definition, a mercenary is a single individual who fights for pay and benefits.

Beginning in the 17th Century, several German states provided troops to foreign governments for pay. Hesse-Kassel, located in northern Germany just west of Prussia, was the largest of the principalities to offer regiments for lease. Its army was created out of necessity since the country had been overrun several times. Its citizens (as well as those living in the other principalities) didn’t have much choice. Few volunteered, but most were conscripted from the lower “classes,” and many came from jails.

The troops from Hesse-Kassel and the others were known for their discipline and fighting ability. During the 17th and 18th Century, German soldiers from one principality often fought those from another.

The American Revolution was not the first time the British hired large numbers of Germans to fight for England. They fought for the British in the Seven Years’ War, the War of Spanish Succession, and other conflicts in the 17th and early 18th Centuries.

There are historical family ties between the House of Hanover (Queen Victoria was the last member of the House to rule the United Kingdom) and the German principalities that made signing a treaty with a German state easy. King George III’s father, George II was born in Hanover, Germany, and King George III retained the title of the King of Hanover until he died in 1820. How and why all this came about is beyond the scope of this post.

German soldiers fighting for the British Army in the Thirteen Colonies were roughly 25% of the number of men deployed by the British Army. They fought, were wounded, died, and even were captured in every major battle during the war. They were so hated by our Founding Fathers that the words “large armies of foreign mercenaries” is one of the 27 grievances listed in the Declaration of Independence.

So what did the German soldier receive as pay? Not a farthing. Each soldier was given his uniform, weapons, housing, and food. He was promised a share of money gained from captured weapons (rarely paid) and items he could take home as plunder (assuming his officers didn’t take the item). His family’s taxes were reduced and would receive a small amount of money if the soldier died or was wounded.

It is no wonder that about a quarter (~7,000) of the German soldiers sent to the U.S. either deserted or, if captured, decided to stay. They saw what most immigrants see today, the U.S. is a land of opportunity.

Image is the watercolor of the soldiers from the Ditfurth Regiment from the Anne Brown Collection, Brown University.