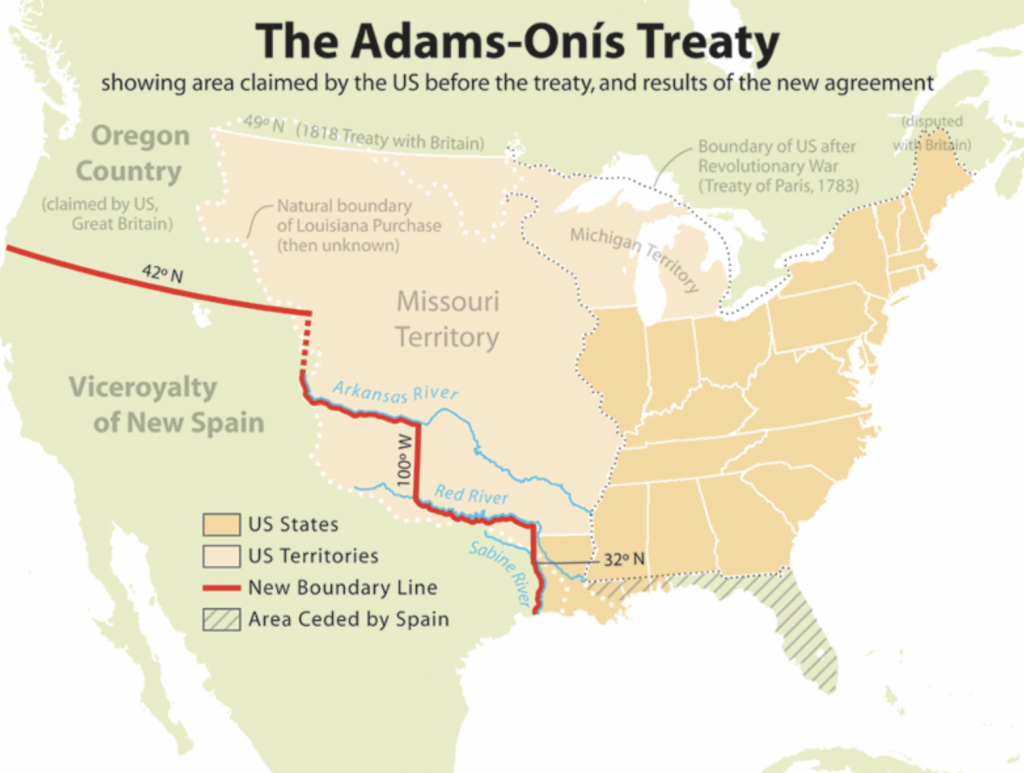 When the Senate ratified the Louisiana Purchase on October 20th, 1802, no one in Washington really knew what the country bought for $15,000,000. The boundaries were not well defined and it was not until 1819 – 17 years, three expeditions and three treaties later – that the U.S. had a much better definition of the borders of the land bought from France.

On August 31st, 1803, Lewis and Clark set off from St. Louis on what would become one of the most significant and epic voyages of discovery in U.S. history. They returned on September 25th, 1806 – three years and 25 days later – with a treasure trove of information. However, they only explored a fraction of the 828,000 square miles of what was bought.

The Red River Expedition, a.k.a. the Freeman-Custis Expedition set out on April 16th, 1806 from near what is now known as Natchez, Mississippi. Heading west, the 24 men wanted to find the headwaters of the Red River. The expedition ran into Spanish soldiers 615 miles west of where they started. At a place now known as Spanish Bluff, they turned back.

Expedition three is named the Pike Expedition that lasted 14 days short of a year. Led by Army Lieutenant Zebulon Pike, their mission was to explore what is now the state of Colorado. Unfortunately, they went “off course” and wound up in New Mexico. Taken prisoner by the Spanish, Pike was ultimately released, but some of his men were kept as POWs for several years.

Net net, these expeditions still didn’t give us precise information on what the Louisiana Territory boundaries were, some of which were still in dispute. The treaty gave us all the territory to the 50th parallel in what is known as Rupert’s Land which was then and still is part of Canada. The western boundary was defined as the crest of the Rocky Mountains and the drainage basin of the Mississippi River. The eastern boundary was simple, the west bank of the Big Muddy.

While the French were negotiating the purchase, they didn’t have the documents that gave them title to the land sold to the Americans. The loosely bounded territory was originally French but as the big loser in the Seven Years War, they ceded the land to Spain. Even after the American Revolution, the French still had dreams of owning territory in North America that they could eventually use as a base to take back Canada from the hated English.

Napoleon, through the very secret Third Treaty of San Ildefonso which was signed on October 1st,1800, got the Spanish to give back the Louisiana Territory in exchange for territory in what we now know as Italy. Spain delayed turning over the paperwork because they were mad at the French for not fulfilling many of the clauses of this and other treaties.

The transfer of the land left the U.S. to negotiate with Spain and Britain to more accurate define the Louisiana Territory’s borders. The Treaty of Ghent that ended the War of 1812 also ended British hopes designs on turf south of Canada. In the treaty, the British gave up any claim to the Louisiana Territory and withdrew from the forts it had built in the region. This agreement set the stage for the Anglo-American Convention of 1818 which set the northern border of the U.S. west of the Great Lakes along the 49th parallel where it resides today.

Dealing with Spain took much longer. In 1819, the U.S. concluded the Adams-Onis Treaty that better defined the western boundaries of the Louisiana Territory. The agreement gave the Louisiana which had been a state since April 30th, 1812, land in the Mississippi delta, the land that is now southern Mississippi and Alabama and set the western boundary of Florida to what it is today. Spain also ceded Florida to the U.S. which didn’t become a state until March 3rd, 1845!

Posted in Blog, Geopolitics and tagged 17 years and three treaties later we knew what we had bought