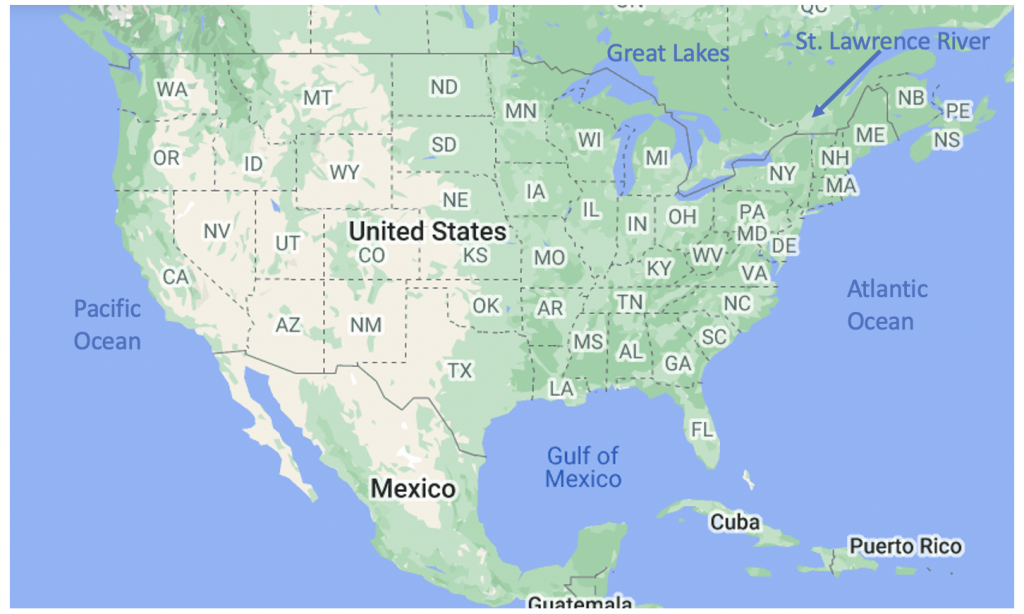 The photos of ships parked off U.S. Atlantic and Pacific ports we see in the media are painful reminders of one of the key lessons of the American Revolution, i.e., we are a maritime nation. To the north, we there are the Great Lakes and the St. Lawrence River. On the east, we have the Atlantic; to the west, the Pacific; and to the south, the Gulf of Mexico.

We are one of six nations blessed with deep-water ports on both coasts that provide access to two of the world’s great oceans. The others are Australia, Canada, Mexico, Russia, and South Africa. However, Russia needs a fleet of ice breakers to keep its ports on the Barents Sea (for access to the Atlantic) and Sea of Okhotsk (for access to the Pacific) open for almost half of the year. Only Vladivostok on the Sea of Japan and Rostov-on-Don on the Black Sea are ice free year-round.

Our geography gives us gives us another strategic and commercial advantage. Ships coming and going to U.S. ports are not dependent on transit rights through a narrow strait. Unlike Rostov-on-Don which requires transiting the Bosporus, ships coming to the U.S. enter a port directly from the ocean.

During the American Revolution, the Royal Navy tried to blockade the Atlantic Coast to shut down the colonies international trading but couldn’t. Although many of our merchant vessels were captured by the Royal Navy, the trade continued with those countries who were neutral and our allies.

For the British, the loss of these ships disrupted Britain’s international commerce and made it difficult to defend their colonies in the Caribbean and India. British merchants lost thousands of pounds worth of goods to privateers and the Continental Navy.

While the Royal Navy had control of the seas, it was forced to divert warships to escort convoys of merchant ships rather than support British Army garrisons. With not enough cargo ships, England struggled to resupply and reinforce the British Army in North America, and its colonies in the Caribbean and India.

Once the war was over, U.S. trade with England and the rest of Europe soared. The new United States also had raw materials – lumber, indigo, cotton, dried fish, fruits and vegetables, wheat, corn, etc. – wanted by European businessmen. And it all went by sea.

So, in this era of supply shortages, remember that in 2021, most of the cargo that comes into the U.S. or is shipped overseas still goes by ship. Despite all fleets of cargo airplanes, what was true in 1775 is still true in 2021, 246 years later, i.e., we are a maritime nation.

Map showing why the U.S. is a Maritime Nation

Posted in Blog, Navy and tagged U.S. international commerce is dependent on shipping by boat