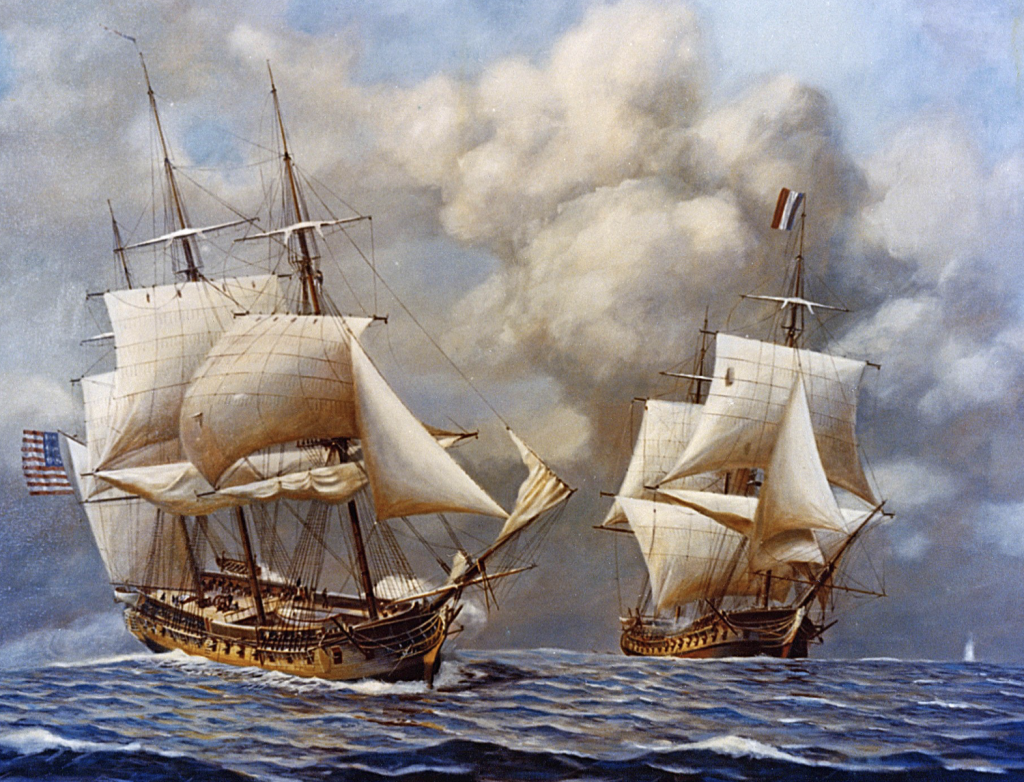 The French Republic won the War of the First Coalition when Austria, Prussia, Spain and The Netherlands made peace. French royalty’s first attempt to restore the Bourbon monarchy had failed. In the aftermath, the Holy Roman Empire collapsed and ceded much of northern Italy, all of Belgium and the Rhineland to France.

Britain, however, did not a sign any of the three treaties remained at war with France. In November 1798, only 13 months later, the War of the Second Coalition began when the British, Russians, Portuguese, the Kingdom of Naples, several German duchies and the Ottoman Empire decided it was time to curtail France’s designs on additional territory in central Europe, Italy and later, the Middle East.

This war ended in 1802 when England and France signed the Treaty of Amiens. Nothing changed on the map other than during the conflict, England officially became the United Kingdom of Great Britain and Ireland.

The United States refused to support either side in either war. During their lifetimes, the Founding Fathers had lived through the War of Austrian Succession that started in 1744, the Seven Years War that ended in 1763 and the American Revolution.

However, our Founding Fathers realized that war in Europe was good for U.S. businesses. With large, relatively forests full of quality oak and pine close to our ports, we could build ships faster and cheaper than European shipyards. American merchant (and other) ships carried flour, salted meats and dried fish and vegetables such as peas, beans and corn along with tobacco and indigo for making blue dyes to Europe.

In both the War of the First and then the Second Coalition, the French Republic pressured the U.S. to side with their cause because, after all, we “owed” them for France’s support during our fight for independence. President Washington, then President Adams resisted because neither trusted the French.

The French Republic decided that the U.S., by signing the Jay Treaty in 1796, the U.S. violated of the Franco-American 1778 Treaty of Alliance and the Treaty of Commerce. The Jay Treaty clarified several points of the 1783 Treaty of Paris and expanded the commercial relationship with Great Britain.

Faced with a growing threat to American ships sailing to European ports, in March 1994, the Congress passed the Navy Act and authorized the formation of a standing Navy and Marine Corps. Six new frigates were initially authorized followed by more ship orders.

France retaliated by issuing letters of marque to privateers based in the Caribbean and ordered its navy to seize American ships sailing to Britain. While the Navy was building ships and recruiting crews, U.S. merchant ships were unprotected. Between October 1796 and June 1797, French privateers seized 316 American ships which amounted to about 6% of our merchant ship fleet.

In response, the Adams administration quietly encouraged U.S. merchant ship captains to join convoys escorted by the Royal Navy and suspended payments on the French loans that helped pay for the War for Independence. By 1796, the United States had a small, but growing Navy that was more than a coastal defense force. The famous six frigates – Constitution, Constellation, Chesapeake, Congress, President and United States – were ready for sea.

Napoleon, who was now First Consul of the French Republic, signed the Convention of 1800 that ended what is known as The Quasi War. The U.S. readily agreed to remaining neutral in any European war. Both sides agreed to formally terminate the 1778 Treaty of Alliance and Commerce.

The Quasi War was a watershed for the nascent United States Navy. A new generation of Naval officers recruited by John Barry came to the fore. These men would later demonstrate their skills against the Barbary Pirates and later, were a nasty surprise to the Royal Navy during the War of 1812.

Painting is of the February 9th, 1799 action in which the U.S.S. Constellation defeated the French Navy’s frigate L’Insurgente courtesy of the Navy History and Heritage Command, National Archive ID# 428-KN-2882

Posted in Blog, Geopolitics, Navy and tagged Wars in Europe helped convince the U.S. Congress to creeat a standing Army and Navy