If you read much about helicopters, whether in the military or the civilian world, you’ll find references to landing in confined areas. These could be a small helipad with buildings, telephone and electrical lines on nearby poles or a clearing in the woods. Or, to make it more exciting, a ledge on the side of mountain.

They all qualify as “confined” areas. The one you don’t read much about is the landing area on the aft end of a small ship. Back in the old days, circa the 60s, 70s and 80s before the Perry- and Knox-class frigates were in the fleet, the helicopter decks on small Navy combatants were, in many cases, an afterthought. The helicopter decks on the Spruance-class destroyers and the Aegis-class cruisers looked like 10,000-foot runways compared to the helicopter decks on the Farragut, Leahy, and Belknap class DLGs (later reclassified as CGs or cruisers).

In an H-2, depending on the ship, we had six to 10 feet of clearance between the tips of the rotor blades and something made of steel. In an H-3, the distance shrank to, in some cases less than three feet. 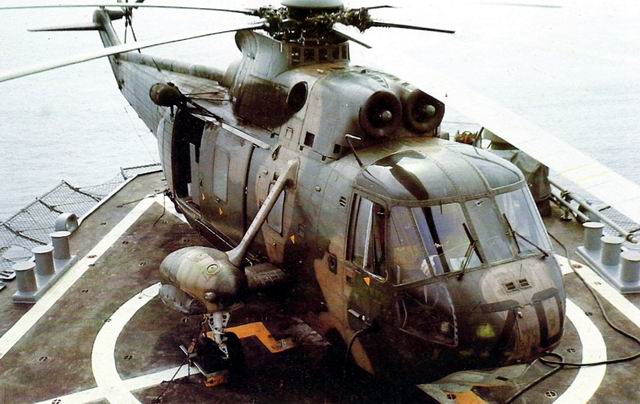 So besides being small, what makes these ships, even the newer ones, the ultimate confined area? Two words – they move! First, they are moving through the water. Second, the place you are trying to land is often moving up and down, rolling left and right and/or in a combination which results in a corkscrew type of movement. And the up and down can be as little as four or five feet. 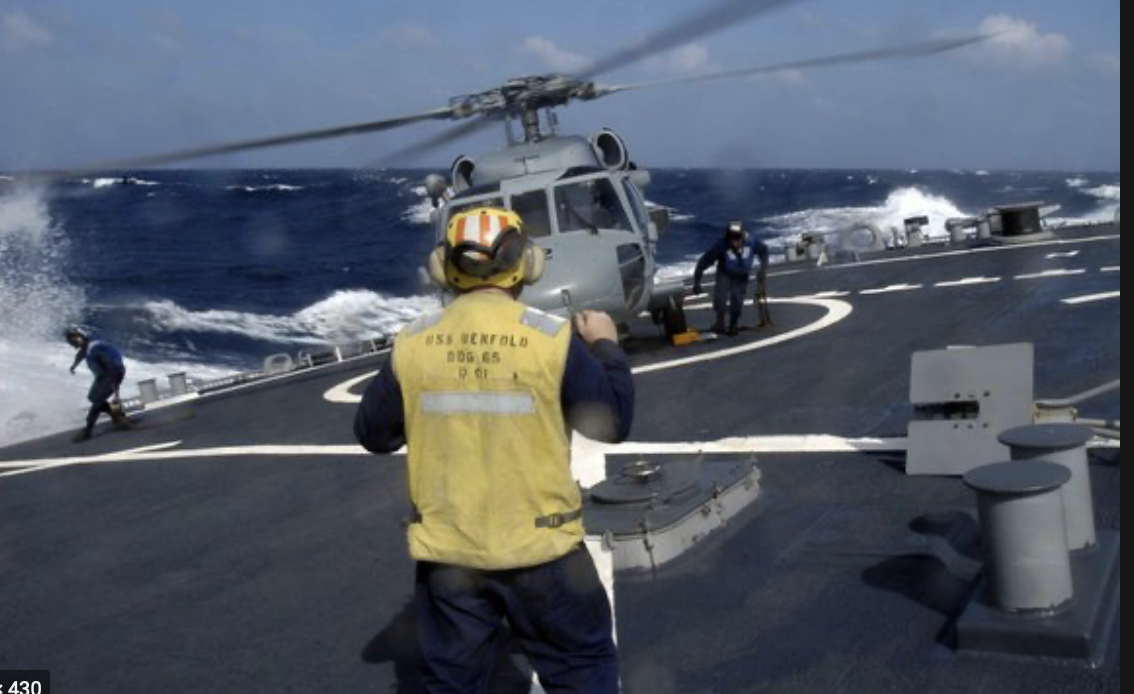 Movement of mean five to 10 feet or more is not uncommon and in nasty weather, your landing area could be rolling 10 – 15 degrees in either direction and going up and down 15 – 20 feet.

The helicopter deck is usually at the aft end of the ship so steaming into the wind with the wind aligned with the direction of the ship is impossible. U.S. Navy and most Allied Navies instruct their captains to sail a course that gives the helicopter pilot a choice of wind coming over the port or starboard side at a 300 angle.

This gives the helicopter pilot an unobstructed approach to the helicopter deck. But all is not wonderful. If there is no wind, the ship will be moving at 10 – 15 knots. In either case, the ship’s superstructure creates turbulence. A burble which is, depending on the velocity of the wind and the type of ship, very noticeable.

So how does one get aboard this moving LZ. First, the pilot slows the helicopter slows to about 10 - 15 knots or less about 100 feet from the side of the ship so it is moving at the same speed of the ship. From there, one can see how much the landing area is moving up and down and/or rolling left or right.

It is bad form to have a 9,000-ton ship coming up and a 20,000-pound helicopter coming down. The result can be a badly bent machine or worse.

Once down, hopefully the helicopter will not slide around the deck which usually covered with a mix of oil, grease, jet fuel, and other liquids that when combined with the dampness of maritime operations, becomes slippery. Non-skid coatings help, the reality is that all they do is reduce the degree of slipperiness a bit.

As soon as the helicopter touches down, chocks and chains are put in place so you can breathe again knowing the helicopter will not slide off the deck and take you to the bottom. Once the rotors are stopped and the engines shut down, more chains are attached and it is safe to exit the helicopter.

Yes, I know the Canadians invented a system called “Bear Trap” in which the helicopter hovers over the deck, lowers a probe which is attached to the ship and the helicopter is winched down. Known officially as RAST – Recover, Assist, Secure and Traverse, the system is used to secure the helicopter and move it into the hangar. The photo shows the RAST Tracks on the deck leading to each hangar. 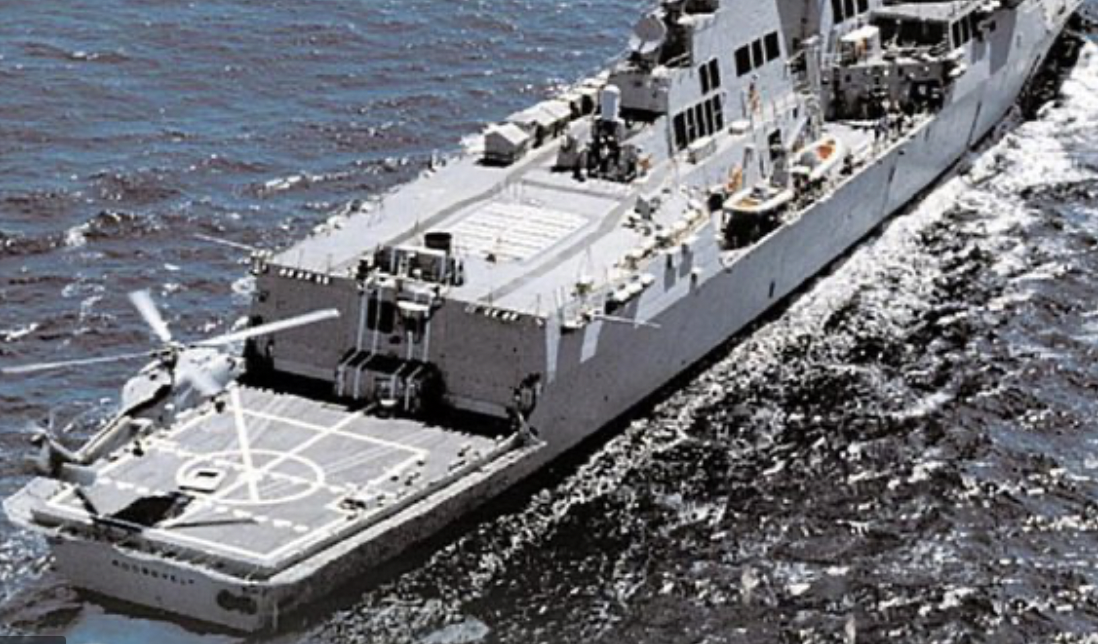 Helo Decks Are Not the Same Size or Shape

For the record, I’ve landed on a small Allied Navy ship to pick up a severely injured sailor who needed medical care that a carrier’s hospital could provide to save his life. The Allied Navy corvette (which is smaller than a frigate) was rolling 150 left and right and pitching up and down 10 – 15 feet. We had to land with only the main mounts on the deck so our rotors wouldn’t hit the superstructure while the medics loaded the Stokes litter with the injured sailor who was connected to several IV bottles.

Evolutions such as this one where one has only a few feet between the tips of the rotor blades and ship’s superstructure keeps one focused at the task at hand. Besides taking on the injured sailor, we didn’t want to create a fireball on the back end of the ship. Landings like these is also why I have gray hair.

Take-offs from a pitching and rolling helicopter decks are easier than the landing. One reason is that there is usually lots of wind which means the helicopter is already in or close to translational lift. Somewhere between 10 – 15 knots, a helicopter enters a condition called translational lift and needs 10 -15% less power to fly.

Back in the 70s, the Navy created a publication called S.P.L.A.S.H. (Shipboard Platform for Landing and Servicing Helicopters) which depicted the landing area of all the “non-aviation” ships, i.e. anything that wasn’t considered an aircraft carrier. While the publication was helpful, the diagrams in the pub didn’t always reflect reality. It was not uncommon that the lights, deck markings and obstacles on the ship didn’t match what was in the S.P.L.A.S.H. pub. Mine from that era has notes on the pages of the ships we visited. See photo of the U.S.S. Sterett (DLG-31) and the page from the S.P.L.A.S.H. pub and note the differences in how the helicopter deck was supposed to be painted and reality. 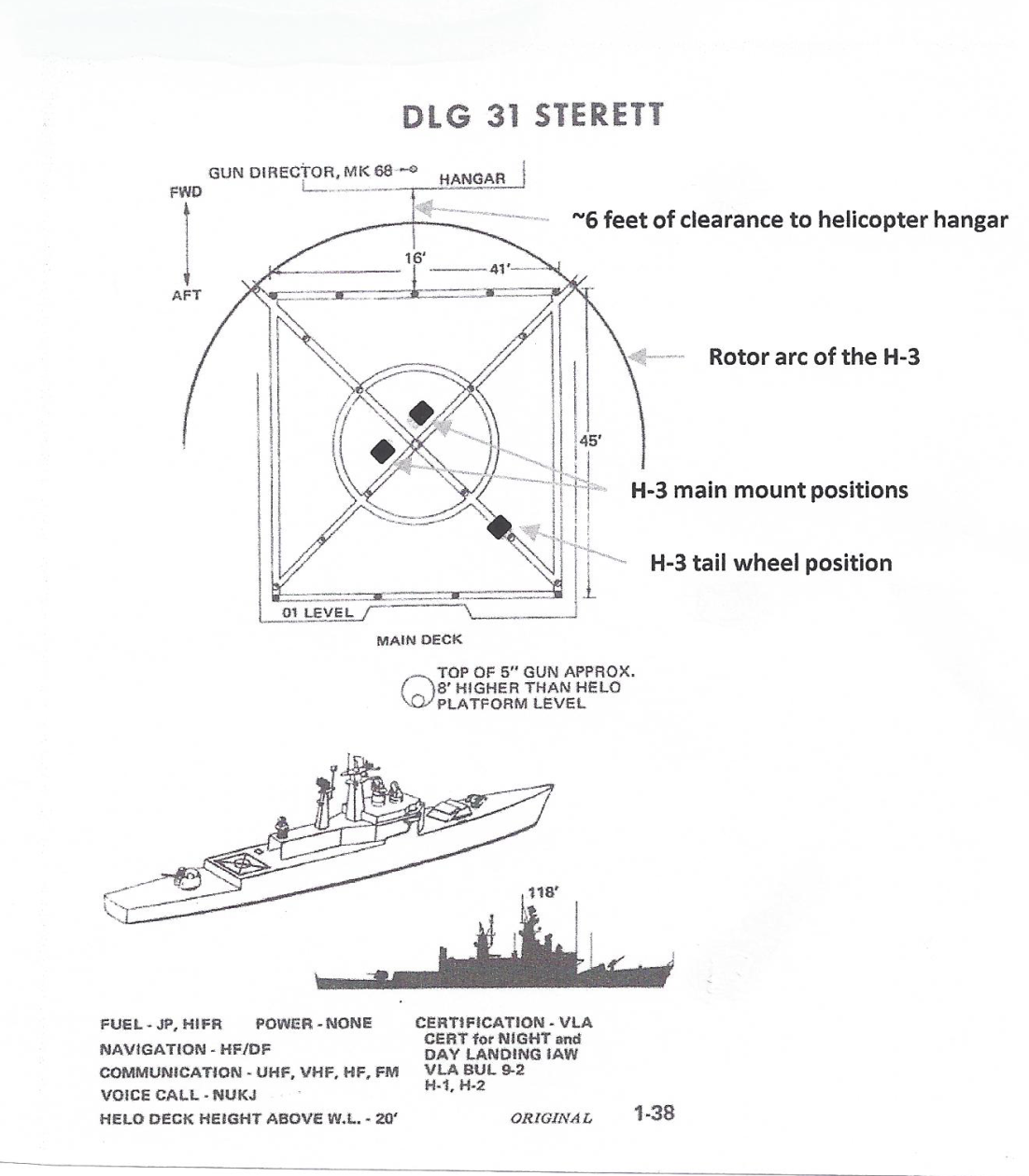 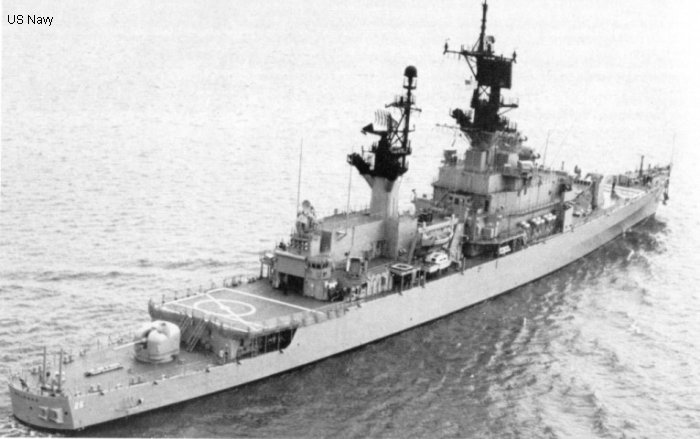 I remember one time when U.S.S. Boat pulled into home port for a week. When we came back out, the yard workers had installed bollards on either side of the helicopter deck. This meant we had to lift an additional four feet to clear them with our landing gear before sliding off to leave the ship. Or on landing, had to hover higher to get in position to land on the deck. Why they were installed was never explained except that someone in D.C. decided the bollards had to be placed on the helicopter deck. See accompanying picture of an H-3 on the deck and note the bollards on each side of the landing area.

Now of course, once off the smaller ship, sometimes you are ordered to fly to another ship and repeat the process all over again. The large bird farms, a.k.a. aircraft carriers and amphibious ships operated by the U.S. and Allied Navies don’t pitch and roll as much as a destroyer or frigate, but they do move up and down. And, they have other things like helicopters and airplanes that seem to take up most of the deck space leaving one with guess what, a confined area that moves!