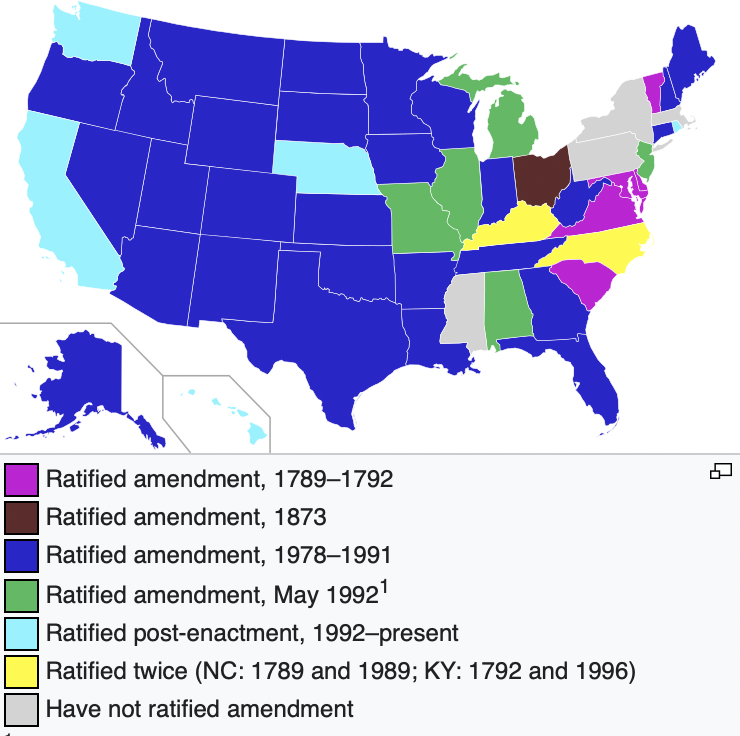 In last week’s post – Madison’s 17 Proposed Amendments – https://marcliebman.com/madisons-17-proposed-amendments/ – one wasn’t either combined into one of the 10 that comprise the Bill of Rights or incorporated into another amendment to the U.S. Constitution. Madison’s recommendation that restricted the ability of U.S. Senators and Representatives to give themselves a pay rase until after an election was tabled. It sat in legal limbo from 1789 until 1982, almost 200 years.

When the amendment was first proposed in 1789, only seven – Delaware, Kentucky, Maryland, North Carolina, South Carolina, Vermont, and Virginia – of the 14 states ratified the amendment. Article V of the Constitution lays out the process for amendments and requires that after 1808, three quarters of the state legislatures or three quarters of state Constitutional conventions must ratify any proposed amendment.

The year 1808 passed and still no ratification. Ohio was the next state to ratify on May 6th, 1873, long after Madison passed from the scene. In 1873, there were 37 states in the union so for the amendment to be ratified, 20 more states needed to ratify to reach 28 (75% of 37). The problem for proponents was that the number of states being admitted was growing which kept increasing the number required.

In 1939 and 18 years later, Chief Justice Charles Hughes court overturned the 1921 ruling by stating in Coleman vs. Miller that if the Founding Fathers wanted to put a limitation on the time needed to pass an amendment, they would have done so.

Madison’s proposed amendment was still in legal purgatory until Gregory Watson, a University of Texas undergraduate, wrote a paper in 1982 on the proposed amendment for a political science course. Watson posited that since the Constitution does not apply a statute of limitations on any amendment, any proposed amendment can be voted on at any time.

Watson received a C from a graduate assistant for the paper that asked why no action had been taken for two centuries and that, if 75% of the states approved, Madison’s amendment could still be ratified. On appeal, his professor, Sharon Waite, refused the change the grade.

To be fair, Watson’s original paper had several mistakes on the number of states and dates they ratified the amendment. Those errors don’t take away from what he accomplished. He began a letter writing campaign to state legislatures in the spring of 1982 asking them to ratify Madison’s proposed amendment.

The campaign took several years to build up steam, but soon – thanks to Watson’s persistence – gained in popularity. What is interesting to note is that when the issue was brought forward in Kentucky, the legislature did not know that the state had already ratified the amendment!

When Michigan ratified what was now known as the 27th Amendment on May 6th, 1992, its vote was the 39th “yes.” Thus, the Amendment was officially ratified 202 years and seven months after the first votes failed to pass it.

Two states – New Jersey who voted no on November 20th, 1789, and Rhode Island who turned it down on June 19th, 1790 – had to reverse their original votes. Only four states – Massachusetts, Mississippi, New York, and Pennsylvania – still have not ratified the amendment.

In 2016, Zach Elkins, a professor at the University of Texas’s Department of Government became interested in how the 27th Amendment became ratified. He tracked down Sharon Waite who graciously agreed to change Watson’s grade from C to A! Today, Gregory Watson is a legislative policy analyst for a Texas State Legislature Representative.

Image, thanks to Wikipedia is a map of the states who ratified the 27th Amendment and when.