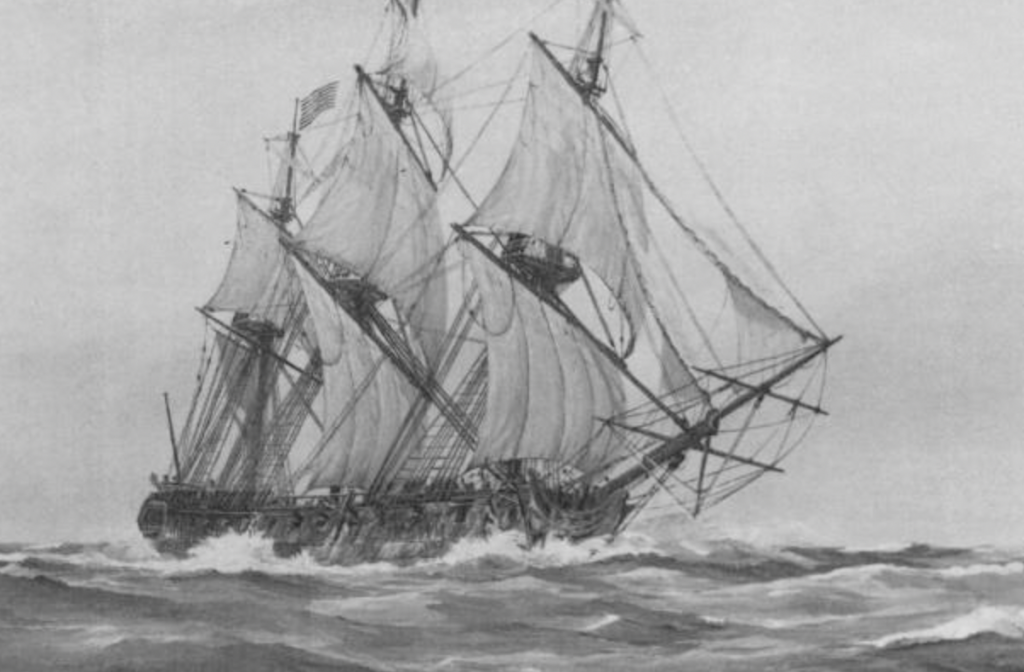 Since the United States is a maritime nation, logic says we need a strong navy to protect our coasts, our merchant ships, and our interests abroad. Yet, despite knowing this, at the end of the American Revolution, the Continental Navy, along with the Continental Army were both gone – dissolved. This left the new nation defenseless.

Why? Our Founding Fathers feared standing armies and navies because they saw them as a threat to democracy. Washington was born in 1732, Jefferson in 1743, Franklin in 1706, Adams in 1735. Their lives were defined by struggles for power and territory in Europe that led to coups, counter coups, and wars.

Internationally, the world in the 1780s and 1790s wasn’t a nice place. Naively, our Founding Fathers thought countries around the world honor our desire to be neutral. They naively thought that the French Navy through the 1778 Treaty of Friendship and Alliance, would protect our merchant vessels sailing in the Mediterranean, the Caribbean and European waters. It did not.

We turned to our former enemy, the British and the Royal Navy. Parliament allowed, at the convoy commander’s discretion, U.S. flagged ships to sail in convoys escorted by the Royal Navy.

There were other bad actors on the scene who recognized no flag. They were only interested in capturing ships, selling the cargo, and holding the ship and the crew for ransom. Even though the Age of Piracy ended mid-18th Century there were still pirates were still operating in the Caribbean. In the late 18th Century, the most famous pirates were based along the North African coast. The Barbary Pirates saw U.S. merchant ships as easy pickings and a gullible young nation who thought tribute would keep its ships from being taken.

When the French Revolutionary Wars began in 1792, nations on both sides claimed U.S. ships were carrying contraband to their enemy and therefore, could be seized. Between 1792 and 1794 when the Jay Treaty was signed, the Royal Navy had seized 300 U.S. ships. Most of were carrying goods from French territories in the Caribbean to customers in Europe, Canada, and the U.S.

By 1797, 20% of the Federal budget was tribute going to the Barbary States. When the amount reached, 30%, the U.S. Congress, led by President Jefferson, said enough was enough and the nascent U.S. Navy was committed to put an end to their demands for tribute.

If one uses the March 20th, 1783, the date Alliance – the last frigate in the Continental Navy – was taken out of service until Washington signed the Navy Act on March 27th, 1794, the U.S. had no navy for 11 years. The act created the U.S. Navy and it would take several years before ships were built and crews trained.

So unless the geography of the earth changes, the point of this post is that the United States needs a strong, well-equipped, and well-led Navy. It was true in 1783 and is just as true in 2021. This is a lesson we learned and painfully re-learned over throughout our history.

Etching is of the U.S.S. Alliance,36 guns that hangs in the National Museum of the U.S. Navy

Posted in Blog, Navy and tagged After the Revolution we needed a strong Navy and still do