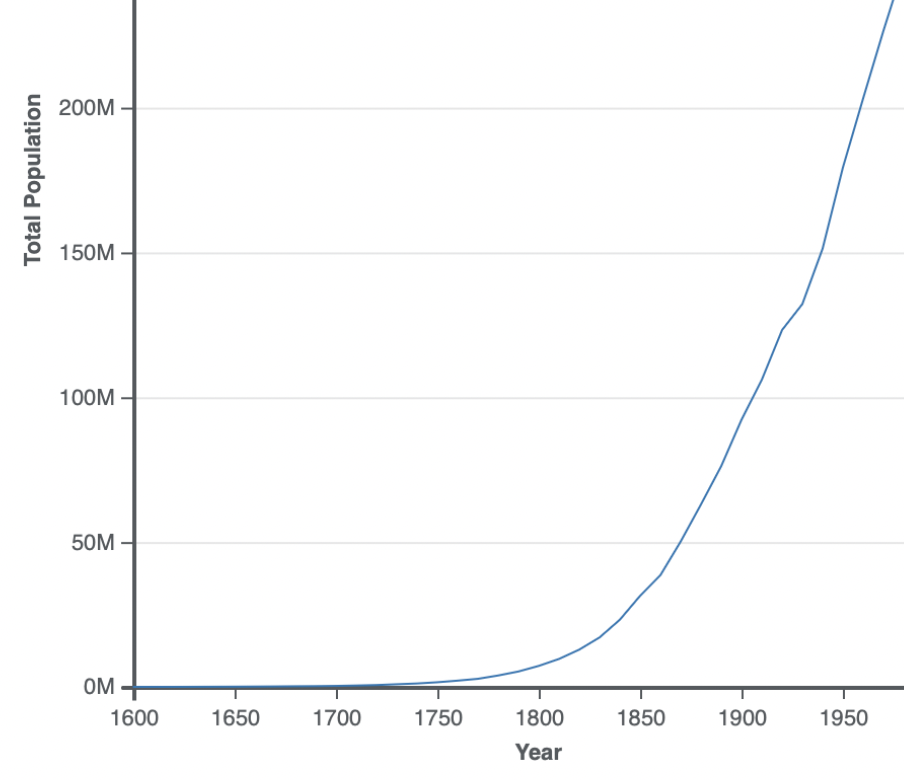 When the American Revolution began in 1775, the U.S. Census Bureau estimated the population of the Thirteen Colonies at 2.148 million. During the eight years of war 6,800 soldiers and sailors died in battle and 17,000 died of disease. Another 175,000 Colonists died of smallpox. The total death from all causes about 198,800 or roughly 9.26% of the population.

These losses do not include the 40,000 Loyalists and freed slaves evacuated by the British or the 40,000 who fled to Canada right after the war ended. One would think that between the years of 1775 and 1780, the U.S. population would have dropped significantly, but it didn’t.

The U.S. Census Bureau chart accompanying this post shows the asymptotic growth of the U.S. population to 1950. After 1800, the chart almost goes straight up!

History suggests the growth came from two sources. One was the birth rate. Large families were the order of the day. In a primarily agrarian economy, families with have six or seven or more children were not unusual. The kids were needed to work the family farm in an era when diseases such as yellow fever, smallpox, typhus, and others took their toll.

However, the biggest source was immigration. The word spread quickly in Europe that in the new United States, there was no king (or queen), or ruling nobility. Land was available. Every man (and woman) was considered equal under the law.

Yes, slavery was the norm in the southern states as it was in Europe as well as the colonies of European nations. Yes, women couldn’t vote, but the point here is that the United States was the first country in modern history to espouse this principle and put it into law, i.e. the Constitution.

Most of the immigrants in the 1780s came from England and Ireland. Once the French Revolutionary Wars began in 1792, people fleeing the fighting from all over Europe began arriving on our shores.

Our Founding Fathers felt that a nationwide “headcount” was important. Knowing how many citizens were in each state would, under the new Constitution, determine the number of representatives each state was allocated in the House. The census would also help in assessing taxes.

Hence in the U.S. Constitution, Article 1, Section 2, Paragraph 3 states “The actual enumeration shall be made within three years of the meeting of the first meeting of the Congress of the United States, and within every subsequent term of ten years …”

So now you know the origin of the U.S. Census.

However the rapid growth of the U.S. population via immigration presented another problem. How does one become a citizen?

The stream of immigrants led to legislation that attempted to answer the “what’s the process of becoming a citizen” question. The first was the Naturalization Bill passed on March 4th, 1790. It established federal procedures and criteria for foreign-born individuals to become U.S. citizens. For more on the late 18th Century immigration legislation, see Blog Post – https://marcliebman.com/immigration-first-became-a-political-football-in-1798/.

If one looks at the U.S. population growth from the first days we began fighting for our freedom, the words of Emma Lazarus’s poem written in 1883 that contains the words “Give me your tired, your poor, your huddled masses yearning to breathe free…” had been occurring for over a century. Immigrants and their contributions are what made this country great.

Graph of U.S. population growth is courtesy of the U.S. Census Bureau.

Posted in Blog, U.S. Politics and tagged The need to know the number of citizens led to the U.S. Census