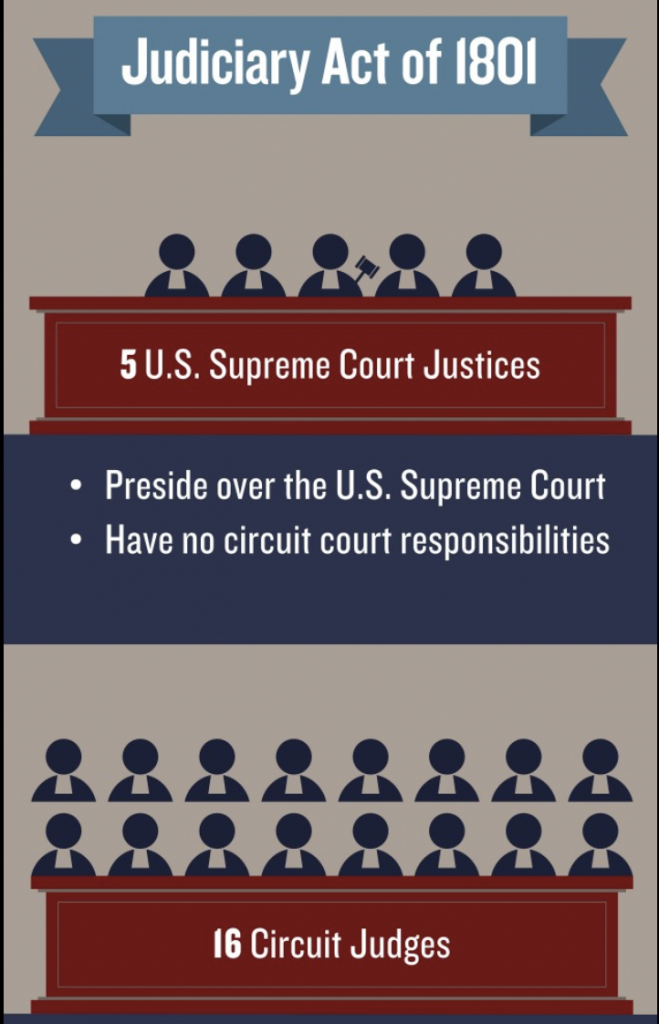 No, the name of the legislation isn’t part of a script for a Spaghetti Western, it is the other name for the Judiciary Act of 1801. So, how’d the name come about?

Those issues were also compounded by party politics. Washington signed the act and is considered a Federalist. His successor was John Adams, also a Federalist. Adams followed Washington as president and as per the Constitution, the man with the second highest number of electoral votes became the vice president. In this case, it was Thomas Jefferson, leader of the Democratic-Republican party.

For four years, if Adams wanted to pursue a diplomatic or domestic initiative, Jefferson opposed it. Jefferson was using his position as vice president to lay the groundwork for his run for the presidency.

The Judiciary Act of 1789 laid the foundation of our judicial system by creating a hierarchy of Federal courts and judicial districts. This created a list of vacancies that the Adams administration was constitutionally required to fill.

Second issue was that the “seat of government” noted in the act didn’t exist. Pierre L’Enfant didn’t present his plan for what we know as the District of Columbia until 1791, two years after the Judiciary Act was passed. Since there was no “Supreme Court Building,” the six justices were required to “ride circuit” meaning they rode out in the countryside to hold court at the district and appellate levels.

Given the travel times of the late 18th Century, sending the Supreme Court Justices into the countryside was, besides being unwieldy, it was inefficient. It also made a mockery of the appellate process since a Supreme Court judge could preside over a trial that might be heard by the Supreme Court.

The Judiciary Act of 1801 reduced the number of Supreme Court judges by one so there was an odd number on the court. No judge would be fired, but when one stepped down, he would not be replaced.

Another provision of the Judiciary Act of 1801 increased the number of circuit courts from three to six and reorganized the judicial districts and the district courts to 10. More would be added as states joined the union.

Its clauses made Federal courts superior to the state courts. By giving the Federal circuit courts the power “to hear all civil and criminal cases arising under the constitution and laws of the United States, and treaties made, or which shall be made, under their authority,” it helped achieve a Federalist goal by enhancing the judicial power of the Federal government.

By the time the law was passed, Adams knew Jefferson would succeed him in the presidency. In the 19 days between the date he signed the act into law and the end of his administration, President John Adams appointed as many judges as he could. With a Federalist majority in the Senate, every one of them was confirmed.

The new judges were known as the “Midnight Judges” because Adams was reportedly signing their Senate-approved appointments up until midnight of his last day in office.

Image is a diagram of the new court structure created by the Judiciary Act of 1801 courtesy of U.S. Capitol Visitor Center.

Posted in Blog, U.S. Politics and tagged U.S. Court Structure created by the Judiciary Act of 1801