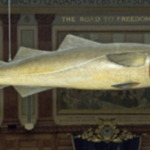 Fishing rights off the Newfoundland and the entrance to the St. Lawrence River were bones of contention during treaty negotiations at the end of the Seven Years War in 1763 and then again in 1783 at the end of the American Revolution. After the first clause which granted independence and the second that described the territory of the new United States of America, came fishing rights. So you might ask why?

Cod was most desired fish. Once caught, they were gutted, butterflied and dried. The dried fish were put in barrels between layers of salt and shipped.

In the early part of the 18th Century, most of the fish went south to the Caribbean in exchange for sugar, molasses, spices and rum. Prices in the French Caribbean colonies were more favorable than those controlled by the English, i.e. each barrel of fish bought more. New England fisherman produced far more fish than the British market could absorb. As Popes declared more meatless days of the year, exports of dried fish started going to arch-enemy France (OMG!!!), Spain (ditto France!), Portugal and other Catholic countries.

In 1733, the British Parliament decided enough was enough and passed the Molasses Act which placed a tariff on non-British colony produced sugar and molasses. The law didn’t stop or slow down the increase of Colonial trade with Continental Europe. British plantation owners in the Caribbean convinced Parliament to pass a second law in 1764 called the Sugar Act which placed tariffs on non-British produced rum and sugar and dried fish produced in New England could not be sold anywhere but England.

In response, British goods were boycotted. Two weeks before the Battle for Lexington and Concord, the British Parliament went one step further and passed a new law that severely restricted businesses in New England ability to trade with Britain and its colonies. The law forbade colonials from fishing off Canada and were not allowed to carry any fishing tackle of any kind on a ship without specific permission from Parliament.

Fast forward to 1783 and negotiations with Britain to end the war. One should not be surprised that one of the negotiators, Massachusetts’ John Adams, insisted on the new United States be given fishing rights to the waters off eastern Canada. The significance of fishing to the Massachusetts Bay Colony is commemorated by a 4’ 11” painted wood replica, known as the Sacred Codfish, that still hangs in the chambers of the Massachusetts House of Representatives.

And this is good old Boston,

The home of the bean and the cod,

Where the Lowells talk to the Cabots,

And the Cabots talk only to God.

Posted in Blog, Geopolitics and tagged Fishing rights were key negotiating points when the U.S. was negotiating the treaty to end the American Revolution