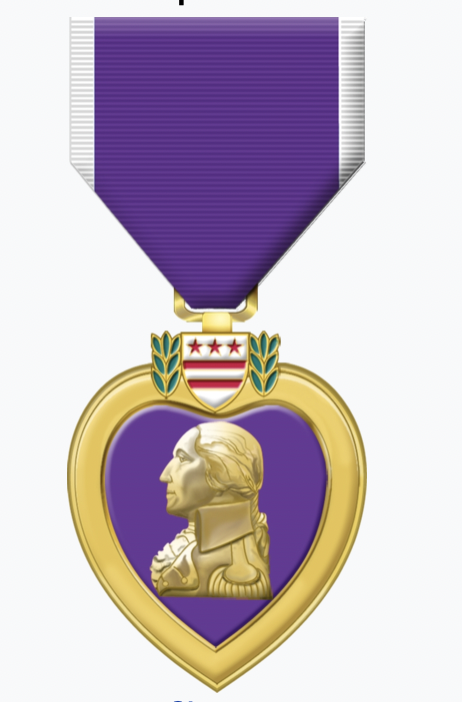 As military services go, the U.S. Armed Forces lagged behind our friends in Europe. This was partly because the kings and dukes who ruled their countries and dukedoms could give land and titles to deserving citizens. During the American Revolution, the Continental Congress could not give away land since it didn’t own any.

Nor could it bestow a title or a knighthood. We were fighting against a country ruled by a king that had lords, earls, viscounts, and other peers of the realm. When the constitution was written in 1797, Article I, Section 9, Clause 8 forbids awarding titles of nobility by the U.S. government. If one is about to receive one, the individual needs Congressional!

What to do? In 1780, the Continental Congress came up with an award called the Fidelity Medal. Only three were awarded.

Two years later, on August 7th, 1782, General George Washington came up with an idea to reward those who distinguished themselves in combat. Ten months after the British surrender at Yorktown, the Commander of the Continental Army wrote:

“The General ever desirous to cherish a virtuous ambition in his soldiers, as well as to foster and encourage every species of Military Merit, directs that whenever any singularly meritorious action is performed, the author of it shall be permitted to wear…over his left breast, the figure of a heart in purple cloth…Not only instances of unusual gallantry but also of extraordinary fidelity and essential service…shall be met with a due award.”

At the time, it was called the “Badge of Military Merit,” and the first three were awarded to non-commissioned officers. Sergeant Daniel Bissell was received the first purple and white ribbon for spying on the British Army in New York.

Sergeant William Brown was awarded the medal for his bravery and initiative on the assault of Redoubt #10. The third recipient, Sergeant Elijah Churchill was recognized for his heroism on two raids on British positions on Long Island.

After the war ended, the Continental Congress authorized the purchase of 15 presentation swords to be given to those nominated by Washington for either superior service, leadership, or bravery. Eight are known to have survived.

During the War of 1812, Congress presented 27 more swords to deserving individuals along with inscribed Hall’s rifles to 17 other men. This is the only time the U.S. government presented a gun to a soldier in recognition of his bravery.

But back to Badge of Military Merit. It was bypassed during the Civil War, the Indian Wars, the Spanish American War and World War I. By the time the war broke in Europe, our allies (and enemies) had a plethora of medals for valor and service. The U.S. only the Medal of Honor which was created during the American Civil War. In 1917, Congress started to correct the problem by creating the Distinguished Service Cross (for valor) and the Distinguished Service Medal (for service).

In 1920, the War Department officially began to study the issue but no effort was made to revive Washington’s Badge of Military Merit. All this changed when General Douglas MacArthur became Chief of Staff of the U.S. Army.

MacArthur informed the War Department that he would revive Washington’s Badge of Military Merit on the 200th anniversary of Washington’s birth. On February 22nd, 1932, General Order #3 stated that: “the Purple Heart, established by General George Washington in 1782” would be “awarded to persons who, while serving in the Army of the United States, perform any singularly meritorious act of extraordinary fidelity or essential service.”

The War Department provided additional guidance on the award of the Purple Heart by stating: “A wound, which necessitates treatment by a medical officer, and which is received in action with an enemy of the United States, or as a result of an act of such enemy, may…be construed as resulting from a singularly meritorious act of essential service.”

Photo of the Purple Heart Medal.