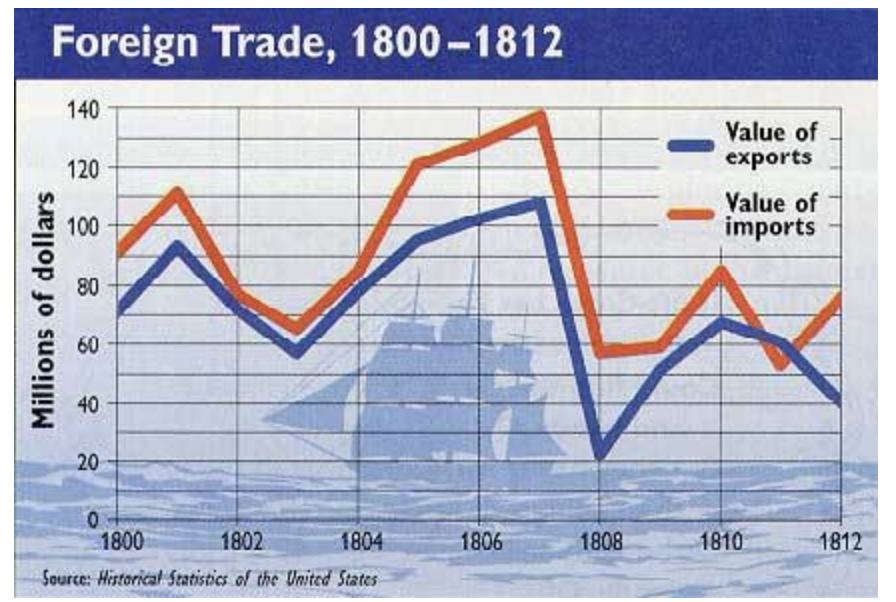 On May 22nd, 1805, the English High Court of the Admiralty used the Rule of 1756 to justify the seizure and sale of the American merchantman Essex and its cargo in an Admiralty court. This ruling had major repercussions and ultimately, it became one of the underlying causes of the War of 1812.

The Rule of 1756 came into being During the Seven Years War and stated that “ships from neutral nations in wartime were only permitted to carry cargos that were permissible in peacetime.” The goal of the Rule of 1756 was to hinder French trade with its colonies.

Fast forward to what began as the French Revolutionary Wars and became the Napoleonic Wars. The new United States desperately wanted to remain neutral in this conflict but continue to trade with any country. Both England and France needed ships to carry cargo to their colonies and U.S. merchants had the needed goods – dried foods, lumber, cotton, etc. The U.S. had both and our GNP tripled between 1792 and 1800.

Great Britain wanted to pull every lever it had to defeat Napoleon and as such, the Royal Navy blockaded French ports all over the world. Using the Rule of 1756, the British began seizing neutral ships contending that it could “interfere” with trade that did not normally occur in peacetime. The “did not normally” occur was a reference to the dramatic increase in goods going into Continental Europe and to French and Spanish colonies in the Caribbean on American flagged vessels.

To avoid a being seized, American ships carrying goods from France, or Spain or another country opposed to Great Britain stopped at an American port on the way to their destination to re-provision. In the British view, this was a violation of the Rule of 1756. Lord Commissioners of Appeal in Prize Causes ruled that stopping in a neutral port did not “neutralize” the cargo when the destination was a port controlled by the enemy.

It sounds like lawyers being lawyers. However, in the case of the U.S. merchant ship Essex, the application of the Rule of 1756 had huge consequences.

Essex was seized while carrying cargo from the French West Indies to France. The court ruled that the seizure was legal under Admiralty Law.

The U.S. was powerless to contest the seizure. President Jefferson had reduced the U.S. Navy to a few frigates and small coastal patrol boats. (See post from 1/23/22– Jefferson Takes a Budget Axe to the New U.S. Navy – https://marcliebman.com/jefferson-takes-a-budget-axe-to-the-new-u-s-navy/ and 1/30/22 post – Jefferson’s Complicated Relationship with the U.S. Navy – https://marcliebman.com/jeffersons-complicated-relationship-with-the-u-s-navy/ )

Over the next few years, the Royal Navy seized hundreds of U.S. flagged ships. Without a strong, well equipped and led navy, the U.S. could not protect its merchants’ ships.

Jefferson responded to the Essex ruling by getting the Congress to pass the Embargo Act of 1807 which forbade U.S. merchants from trading with countries at war. It backfired and U.S. trade declined dramatically causing Jefferson to push through the Non-Importation Act of 1807 that prohibited U.S. merchants from doing business in either France or Britain or any of their colonies. It too was largely ignored.

While Jefferson preferred that the U.S. be insular and not have a large segment of the economy dependent on international trade, most U.S. businessmen disagreed. The U.S. had goods that were in demand overseas and we had the ships to carry them. Jefferson left, his successor, James Madison, with a major crisis that would lead to the War of 1812.

Image is a chart showing the effect of the Embargo Act of 1807 courtesy of Sutori.

Posted in Blog, U.S. Politics and tagged U.S. Trade plummeted after the Embargo Act of 1807 was passed