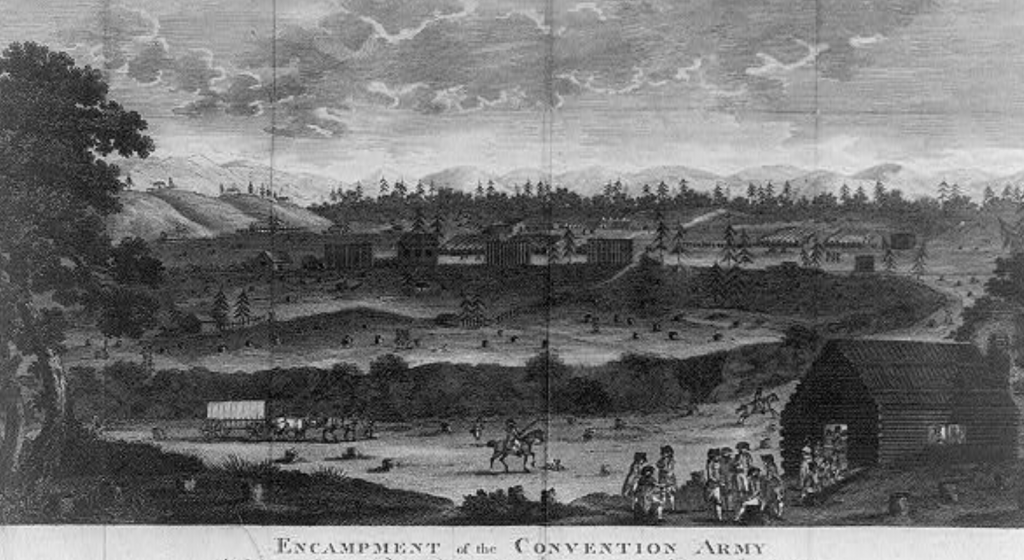 After 19 days of off and on fighting, the Battle of Saratoga ended on October 7, 1777 with British Army General John Burgoyne surrendering his army. Burgoyne’s 6,200+ man force was made up of British soldiers, Canadian men mostly from Quebec and German mercenaries from Hesse-Cassel, Hesse-Hanau and Brunswick-Wolfenbüttel.

The surrender document Burgoyne signed is known as the Convention of Saratoga. Under its terms, the European troops would be returned home on British ships and would not be allowed to return to North America until after the war ended.

Saratoga is in upstate New York was a long way from any port that could handle enough ships to carry 6,200+ men. The prisoners were marched south to Cambridge, MA (outside of Boston) where, for the next year they were kept in crude barracks used by the Continental Army during the siege of Boston.

When General Burgoyne refused to provide a list of his officers, the Continental Congress revoked the terms of the surrender terms, a.k.a. Saratoga Convention in 1778. Suddenly, the Continental Army had a large number of prisoners on its hands with neither the money nor the resources nor the facilities to house the prisoners long term.

By the spring of 1779, approximately 1,500 prisoners had escaped to live  in the new United States. The Continental Congress decided to move the POWs 700 miles south of Cambridge to Charlottesville, VA. Lieutenant Colonel Joseph Crockett’s Western Battalion was assigned to guard what was now dubbed “The Convention Army.”

They arrived in Charlottesville in January 1779 in the midst of one of the area’s coldest winters in history. Despite the miserable conditions, about 600 more prisoners escaped captivity.

The Continental Congress had little or money to pay for a stockade or any other type of enclosure so the prisoners started building their own huts and fencing to improve the poor accommodations at what was known as the Albemarle Barracks. Under the Articles of Confederation, the Continental Congress couldn’t levy taxes to pay for supporting the POWs and had to beg the states for money to feed and house the prisoners. Or, the Congress could demand money from England to pay for their upkeep.

Contributions by the relatives of the prisoners provide money to feed, clothe and house the prisoners. Thomas Jefferson estimated that the donations from relatives added about Continental $30,000 week to the local economy.

Security was lax and the number of men held continued to drop. Again, most stayed in what would become the U.S.

As the British Army started moving north out of South Carolina, the Convention Army was again escorted by the Western Battalion to Frederick, Maryland where they were held until repatriated. These prisoners as well as those captured at Yorktown became an issue during the peace negotiations.

Of the 6,200 who were originally taken prisoner at Saratoga, about 2,000 returned home to England, Canada and Germany after the Treaty of Paris was signed. Of the other 4,200 members of The Convention Army, some died from disease and exposure, the majority escaped and “immigrated” the new United States.

Source of the image – Etching of the Albemarle Barracks was created in 1789 and the artist is unknown. Image courtesy of the Library of Congress

Posted in Army, Blog and tagged What happened to British POWs taken at Saratoga