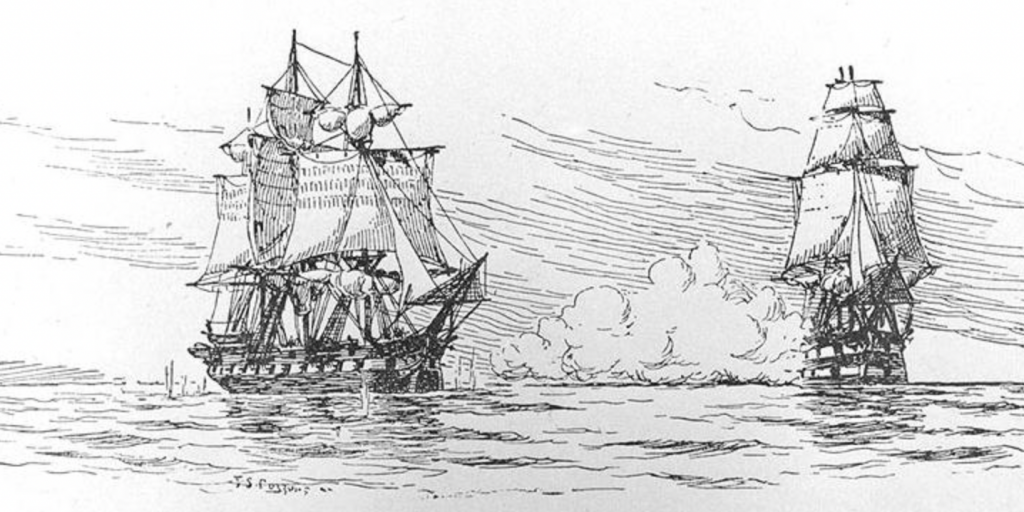 As the Royal Navy expanded in England’s fight with Napoleon, it needed more and more men. By the time war was declared against Britain on June 18th, 1812, the Royal Navy had impressed over 15,000 U.S. merchant sailors. Once these men were on taken onto a Royal Navy ship, they were “enlisted for the duration plus one day” which meant the Americans were in the Royal Navy until Napoleon was defeated or the British surrendered to the French.

The Royal Navy had another problem – desertion. When ships pulled into ports to resupply, it was not uncommon for men to go over the side and try to reach shore. If they were a member of a working party sent ashore, some tried to run away. If they were recaptured, they were either flogged or hung.

Leopard hailed Chesapeake, asking its captain, James Barron, to heave to so the ship could be searched for deserters. Barron’s crew included many English citizens who had enlisted in the U.S. Navy. Four of whom had deserted from the Royal Navy of which only one was born in England. Barron, both as a courtesy and with a ship not ready to fight, complied.

Salusbury Pryce, Leopard’s captain, sent a lieutenant to present the British search warrant and his demand to turn over the deserters. Barron refused.

When the British lieutenant returned to Leopard, Pryce opened fire. In a single broadside, he killed four U.S. sailors and wounded 17. Chesapeake fired only single shot in return before Barron hauled down his flag.

To be fair, Chesapeake was not ready for a fight. It had just come out of the Washington Navy Yard and her decks were cluttered with stores in preparation for a long cruise and its cannon were not properly lashed in place for a fight.

Chesapeake was searched and four men were taken to Leopard. One – British born Jenkin Radford – was later hanged for desertion, one died in Royal Navy service and the other two were released in 1812 right after the War of 1812 began.

James Barron, who served with distinction during the Quasi War and the War Against the Barbary Pirates was court martialed and never had another command although he did remain in the Navy and ultimately became its most senior officer in 1839.

For Thomas Jefferson, the Chesapeake-Leopard affair was a PR disaster. It was again proof that the U.S. needed a navy to protect its merchant fleet, something Jefferson adamantly opposed. By the War of 1812, the 1,800 ships in the U.S. merchant fleet made it the largest merchant fleet in the world. The incident also forced Jefferson to ram the Embargo Act of 1808 through the Congress and set the U.S. on a course that would eventually lead to the War of 1812.

Drawing is Fred Cozzens’ depiction of the Chesapeake-Leopard incident published in 1897.