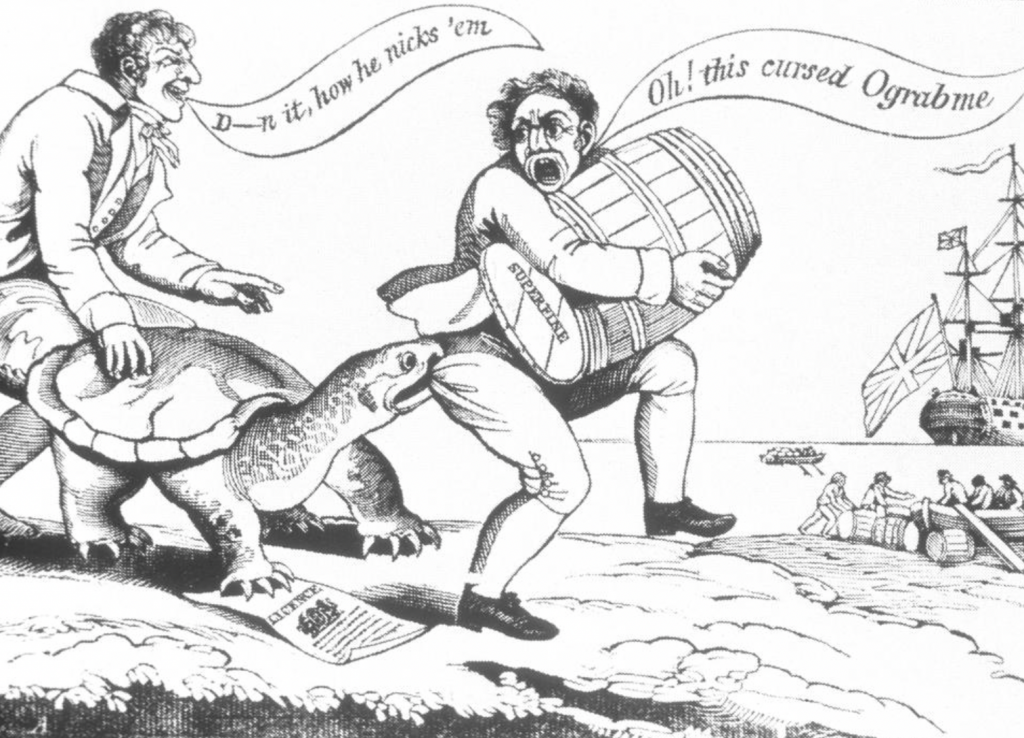 To understand why The Embargo Act of 18o7 came about, one must understand what was happening on the other side of the Atlantic. On May 16th, 1806, the British formally declared that the Royal Navy would blockade every port from Brest to Hamburg. This was an expansion of what the Royal Navy had been doing since the French Revolutionary Wars began in 1792 which was watching every major French port.

In response, on November 21st, 1806, Napoleon, who had just captured Berlin, issued his Berlin Decree. His order made it illegal to import British goods into any country allied with or dependent on France.

We, as a country, had loudly proclaimed our neutrality and since U.S. flagged ships were not carrying munitions, U.S. traders continued thinking, naively, that both the French and British would allow U.S. flagged ships to continue delivering goods to ports in Europe.

Au Contraire. The French thought we were secretly allied with British since most – an estimated 70 – 80% – of our trade was with England and wanted it stopped. The English simply wanted to impose an economic stranglehold on Napoleon and therefore, any ship going to a port in territory held by France should be seized.

Congress passed the Non-Importation Act of 1806 which banned importing goods from England failed. It was impossible to enforce and turned U.S. traders into smugglers.

Jefferson sent James Monroe and Thomas Pinkney to England to negotiate a treaty that would resolve our differences. In December 1806, the pair brought back a proposed treaty that did not include an agreement by England to end impressment. Jefferson refused to send the document to Congress for ratification in January 1807 so the treaty died.

The June 1807 Chesapeake-Leopard Incident added pressure for Jefferson to “do something.” By July 1807, 4,228 U.S. citizens who, as members of merchant ship crews had been impressed, i.e. kidnapped, and forced to serve in the Royal Navy. Of these, 936 had been released leaving 3,292 still serving against their will in the Royal Navy. Unfortunately, the number was increasing.

Jefferson wanted to avoid military action against the British so he rammed the Embargo Act of 1807 through Congress hoping to put pressure on England. Not only did the legislation have any impact on England, it also compounded the problems created by the Non-Importation Act and contained a laundry list of items that could not be imported from England. Almost overnight, it created a crisis by choking the U.S. economy which was thriving/growing rapidly via exports.

The Embargo Act affected every state. In the agrarian south, suddenly merchants couldn’t ship dried food, cotton, indigo, lumber, tobacco, and other items to Europe. In the north, its traders couldn’t sell dried fish and fruit, lumber, and other products to European customers.

Jefferson’s law was almost impossible to enforce and was ridiculed throughout the U.S. To make matters worse, Jefferson encouraged his fellow Democratic-Republicans in the Congress to add supplements to the bill.

One cartoonist created a snapping turtle called Ograbme and used him in many satirical and cartoons to portray how the Embargo Act negatively affected trade and the economy. Ograbme is embargo spelled backwards.

By 1808, the impact of the Embargo Act was clear. It needed to go. Before Jefferson left office, but after he knew James Madison was going to succeed him, Jefferson signed the order repeal of The Embargo Act in March 1809 adding an economic mess to the foreign policy mess Jefferson created for his successor.

The 1807 cartoon is of the snapping turtle Ograbme biting merchants who want to trade with England.

Posted in Blog, U.S. Politics and tagged Embargo Act of 1807