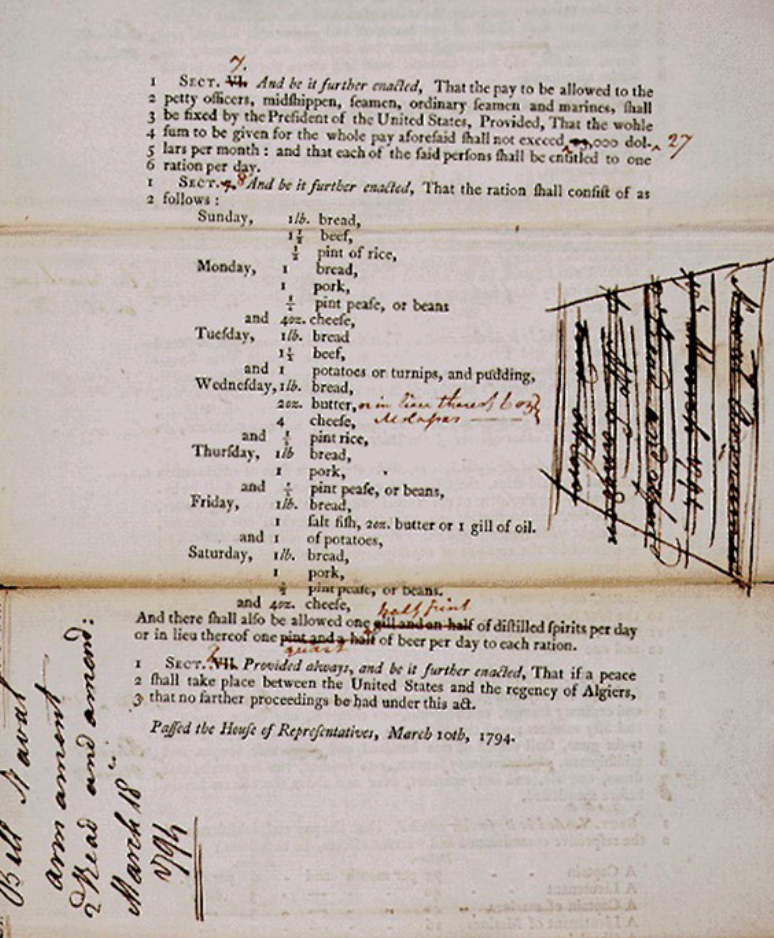 The modern U.S. Navy came into being when the Congress passed the Naval Act of 1794. For at least two years, Treasury Secretary Alexander Hamilton and Minister (Ambassador) to France Thomas Jefferson urged the Congress and President Washington to create a standing navy. Pressure from merchants who owned ships and cargos that were taken by the Barbary Pirates (11 in 1793 alone) and foreign navies added to the heat on Washington and the Congress.

Ever since the Continental Navy was disbanded and the Continental Army was dissolved in 1784, the country had no standing military force. Each state was required to maintain a militia but money was in short supply and the units were underfunded and undertrained.

The cost, fear of coup by the leaders of “standing” army and not wanting to appear to be a threat to European powers, our Founding Fathers were reluctant to have a “permanent” Army and Navy. Under the Articles of Confederation, the government didn’t have the power to levy taxes so getting the 13 states to pony up money for an army and navy was a non-starter.

Article I (Legislative), Section 8, Paragraph 13 of the newly ratified Constitution gave the Congress the power to “Provide and maintain a Navy.” Article II (Executive), Section 2, Paragraph 1 makes the President, the Commander-in-Chief of the Army and Navy. The Constitution also gave the House of Representatives the power to raise taxes. The ability to pay for a Navy was granted, but not used until on March 27th, 1794, when the Navy Act was passed. See blog posted on 7/11/21 “For Purchase or Otherwise” – https://marcliebman.com/for-purchase-or-otherwise/ .

What’s unique about the legislation was that rather than have the President or the Navy assess the threat, Congress dictated the number of ships (four with 44 guns, two with 36 guns), pay, crew size and organization, and much more including the daily menu (see image with this post). Opposition to the bill was strong and a compromise was a clause inserted into the bill stating that if a peace treaty with the Barbary Pirates was reached, then construction of the ships would cease. The Barbary Pirates were a group of city states on the North African side of the Mediterranean from modern Algeria east to Libya.

While the ships were authorized, long term funding was limited by Article I (Legislative), Section 8, Paragraph 12 which states “12: To raise and support armies, but no appropriation of money to that use shall be for a longer term than two years.” Given that we were starting with a clean sheet design, selecting designer, the shipyards, issuing the contracts were political footballs in 1794 just like they are today. Building and outfitting the ships would, even without interruptions, would take more than two years.

When a treaty was signed on November 4th, 1796 with the Bey of Tripoli, the clause that ended construction kicked in. Construction on all six frigates stopped. Washington went back to Congress and in 1797, funding for only three ships United States, Constellation and Constitution was approved.

Work was underway building these ships as well as recruiting and ultimately training crews when the XYZ Affair (see blog posted on 7/26/2020 – https://marcliebman.com/laffaire-de-xyz/) occurred. In 1798, the Revolutionary French government ordered its Navy to seize American ships and issued letters of marque to privateers to do the same. Reluctantly, the Congress agreed to fund the three remaining ships President, Congress and Chesapeake.

President was the last of these frigates to be completed. It was launched in 1800, six years after its design and construction was approved by Congress. So, you see, Congressional interference, some would call it oversight, in defense procurement has been with us since the first days of our country.

Image is of the last page of the Naval Act of 1794 where the Congress dictates the menu to be served on board Navy ships.

Posted in Blog, Navy and tagged Congressional interference in defense procurement has been with us since the beginning of our nation