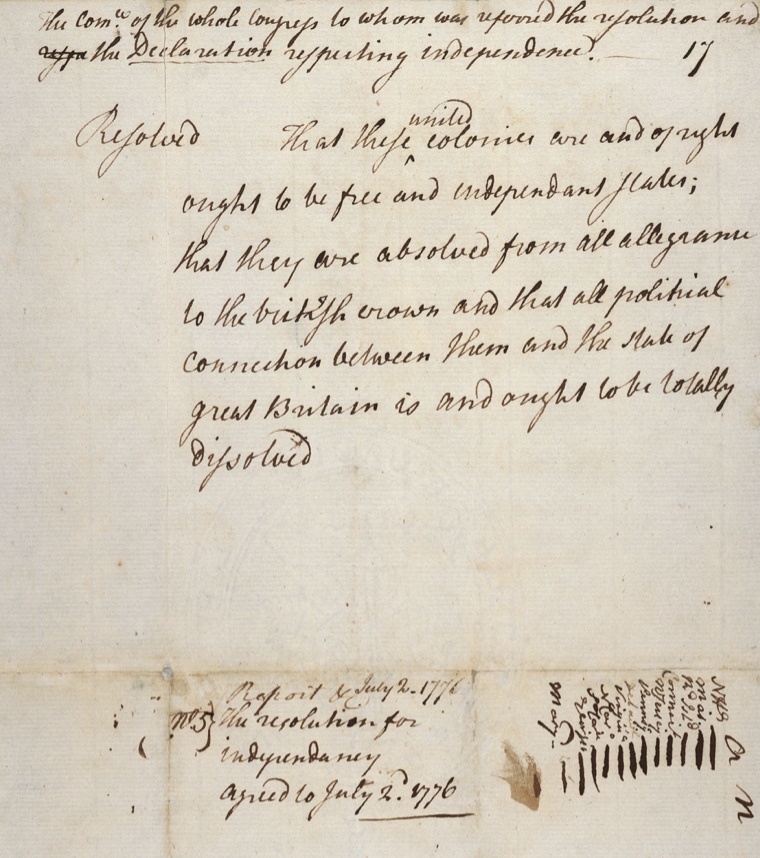 We are all taught that on July 4th, 1776, the Declaration of Independence, was signed and promulgated. Well, not exactly.

By the time the Declaration of Independence was approved by the Second Continental Congress, the colonies had been at war with England for over 15 months. The Battle of Lexington and Concord occurred on April 19th, 1775. Bunker (or Breeds) Hill was fought on June 17th, 1775 and the siege of Boston ended on March 17th when the British pulled out of the capital of the Massachusetts Bay Colony.

So here are six fun facts about the Declaration of Independence that have been skipped over.

This resolution was written by Virginia delegate Richard Henry Lee and based on a resolution passed by the Fifth Virginia Convention which had already declared Virginia a free and independent nation. The text of the short Lee Resolution is – Resolved: That these United Colonies are, and of right ought to be, free and independent States, that they are absolved from all allegiance to the British Crown, and that all political connection between them and the State of Great Britain is, and ought to be, totally dissolved. That it is expedient forthwith to take the most effectual measures for forming foreign Alliances. That a plan of confederation be prepared and transmitted to the respective Colonies for their consideration and approbation.

When the delegates to the Second Continental Congress unanimously passed the Lee Resolution, they knew that the “Committee of Five” – John Adams (Massachusetts), Benjamin Franklin (Pennsylvania), Thomas Jefferson (Virginia), Robert Livingston (New York) and Roger Sherman (Connecticut) – was almost finished with its declaration. While Jefferson physically wrote what became known as the Declaration of Independence, his initial draft incorporated many ideas from other men not on the committee such as Francois Salvador from South Carolina with whom he corresponded.

TWO, the Committee of Five submitted its the original draft to Congress on June 28th, 1776. Members of the Congress read and requested changes that shortened the document by about 25%.

FOUR, the original draft submitted to the Continental Congress and used for the basis of editing has been lost to history. Back then, the Congress had a secrecy rule and many historians believe that once the final version was approved, the notes and drafts were destroyed.

FIVE, while the delegates of the Second Continental Congress voted for promulgating the Declaration of Independence on July 4th, 1776, most of the men who signed the document did so on August 2nd, 1776.

So, on this day, 245 years ago, We the People took a giant step on the long road to independence. It took eight long years from April 17th, 1775 when the Battle of Lexington was fought until September 3rd, 1783 when the Treaty of Paris was signed, to become an independent nation.

Ultimately, the United States of America became the greatest democracy in this planet’s history. Even with the problems we face today, we would all do well and be better off to take a moment to recognize the risks the Founding Fathers took when they drafted and then signed the Declaration of Independence. We the People have all benefited from their vision and courage.

Image is of the Lee Resolution from the National Archives.

Posted in American Revolution, U.S. Politics and tagged The Declaration of Independence was not the first passed by the Continental Congress