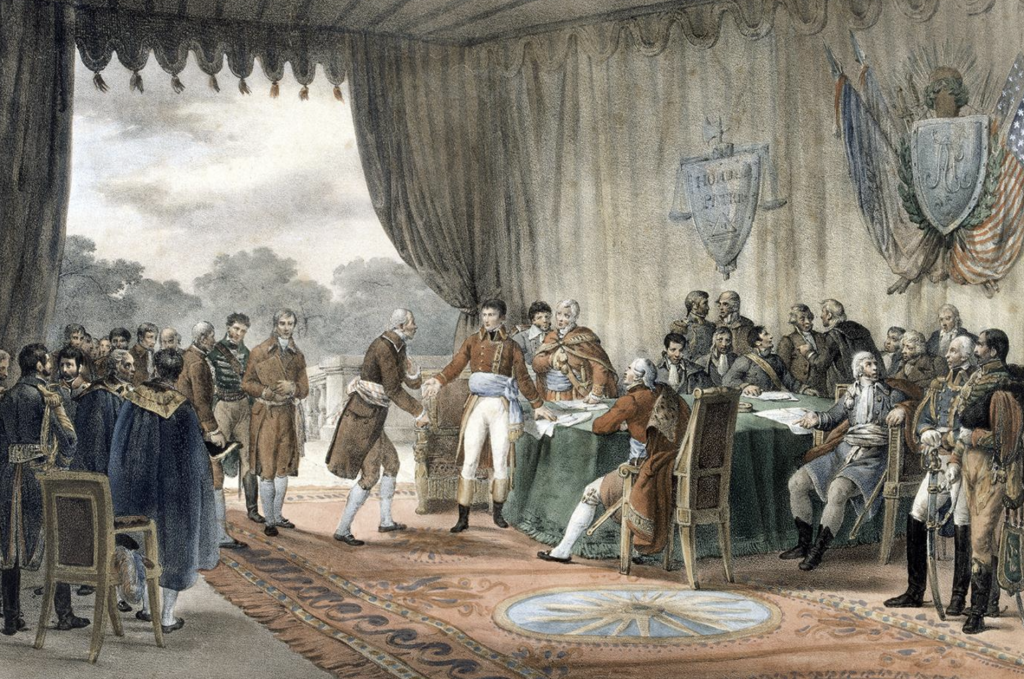 The French Revolution which began in 1789 presented a series of difficult foreign policy challenges for the United States. One of the clauses in the Franco-American 1778 Treaty of Friendship and Alliance committed the U.S. to help France defend its interests – read possessions – in the Caribbean.

In 1794, under French pressure for help fighting the British/Russian/Prussian/French Royalist alliance in the War of the Second Coalition, the U.S. passed the Neutrality Act of 1794 to reinforce Section 8 of Article One of the Constitution which gives Congress the sole power to decide to go to war. This act made it illegal for any U.S. citizen to provide the wherewithal for any military action against the territory or government of a country that is at peace with the U.S. This act has been updated/modified in 1817, 1834 and is in Title 18 of the U.S. Code of Justice. The Neutrality Act of 1794 also abrogated the 1778 Treaty of Friendship and Alliance.

Adams, who took office on March 4th, 1787, wanted to stay out of the war raging in Europe. The French responded by issuing letters of marque that enabled French privateers to seize American ships. The U.S. responded by “suspending” payments on French loans that helped fund the American Revolution.

Jefferson and the Democratic-Republicans (the party that evolved into the current Democratic Party), opposed any standing Army or Navy on the grounds that it would lead the country to participate in foreign wars. They vigorously fought Naval Act of 1794 that created the modern U.S. Navy. Even though ships were authorized by the new Navy Department, the Democratic Republicans held up funding for the new ships which delayed their completion.

Adams was trying to negotiate a settlement with the French when the Democratic-Republicans leaked what we would call today classified documents about the negotiations. The effort, known as the XYZ Affair, backfired on Jefferson, who was the vice president and his allies in Congress. (See blog post – https://marcliebman.com/laffaire-de-xyz/ ).

Alarmed by the actions of French privateers, on July 7th, 1798, the Congress formally terminated the Treaty of Alliance and Friendship and the Treaty of Commerce. It also authorized the arming of merchants and the Navy to attack French naval vessels and privateers.

In France, the French Directorate was overthrown by Napoleon Bonaparte in coup on November 10th, 1799. Both he and French Foreign Minister Tallyrand were afraid that England would move into what became known as Louisiana and make it part of Canada. Sensing Spain could not protect the land from the British, Tallyrand, at the urging of Napoleon, began to take steps to finalize the transfer of the Louisiana territory to France as was supposed to occur by treaty in 1763 at the end of the Seven Years War.

With Louisiana coming back as a French possession, Tallyrand began negotiations with the U.S. to end the undeclared Quasi War. The document is called the Convention of 1800 because the U.S. did not want to sign a treaty. In Europe, the document is known as the Treaty of Mortefontaine. Its clauses provide for a commercial relationship and did not provide restitution for the ships and cargos seized by the French. U.S. merchants would have to be compensated by the U.S. Government and the last claim was not settled until 1917 when the U.S. was about to enter World War II.

The Convention of 1800 created the environment that led to the Louisiana Purchase. Still afraid that the British would move into Louisiana, Napoleon looked to the U.S. Two years later, he saw the 1803 sale of France’s Louisiana territory as a chance to generate cash and prevent British expansion in North America.

Posted in American Revolution, Blog, Geopolitics, U.S. Politics and tagged Avoiding participating in a war in Europe ultimately leads to the Louisiana purchase