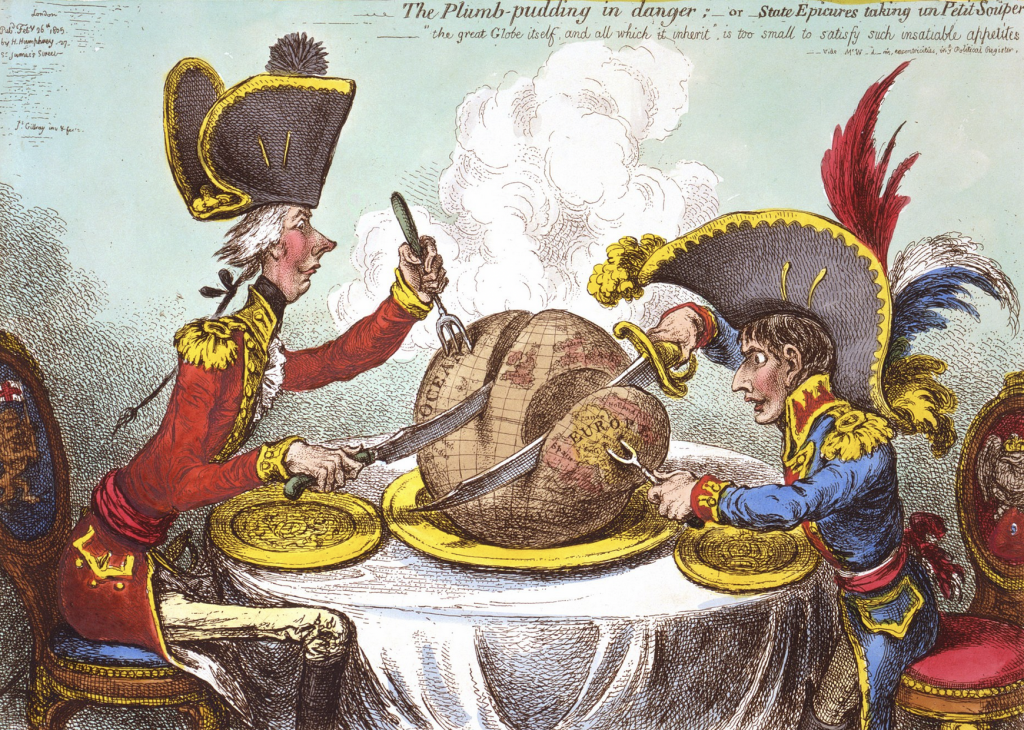 The U.S. War for Independence left the Thirteen Colonies devastated. Wounds and disease killed over nine percent of the population and the economy was in shambles.

The Founding Fathers knew their history. Many had fought in the Seven Years War and the Revolutionary War wanted no part of another. They also knew that the kings and queens of Europe were constantly quarrelling and their spats often turned into wars.

The leaders of the new United States of America were split. There were the Francophiles led by Jefferson who wanted closer a relationship with France as a way of saying thank you for their support during our war with England. Before he became president, Jefferson helped the Marquis de Lafayette and others who wanted a constitutional monarchy or to depose King Louis XVI and create a republic.

The Anglophiles led by Washington and Adams believed closer relations with England were in the best interest of the U.S. They saw expanding trade England, America’s traditional trading partner, as the fastest way to rebuild the U.S. economy. During negotiations with the British to end the war, the English signaled a similar desire during discussions as well as with several clauses in the 1783 Treaty of Paris.

The Jay Treaty of 1796 helped clarify issues left unresolved or poorly defined in the Treaty of Paris and was vehemently opposed by Jefferson and his Democratic Republicans. They believed the treaty would strengthen the Federalists led by Alexander Hamilton who were their political opponents.

In 1804, President Jefferson sent James Monroe and William Pickney to England to negotiate an end to Britain’s harassment of U.S. shipping not headed to England and the Royal Navy’s impressment of American seamen. They Monroe-Pickney Treaty was signed by the English but Jefferson refused because it did not guarantee that the Royal Navy would end impressment.

The British refused to end impressment because the Royal Navy was desperate for men to man its ships. England was locked in a titanic struggle with France that began with the first of French Revolutionary wars in 1792 and would last for 23 years.

U.S. merchant ships were easy targets and the Royal Navy would take as much as 25% of the crew who had little chance of being repatriated unit Napoleon was defeated.

Officially, the Treaty of Ghent ended the War of 1812 in January 1815 and stopped the impressment of U.S. seamen and roughly coincided with the final defeat of Napoleon in June 1815. Europe, for the first time since 1792, was at peace.

Still, U.S. leaders were distrustful of European royalty’s motives and were afraid that the European powers would try to regain control of the colonies that they lost to either independence movements or to another country by force. Most of this turf was in the Caribbean, Central, South and even North America. Florida had just changed declared its independence. (See blog post – Battle of Florida Part 2 – June 7th, 2020 – https://marcliebman.com/battle-for-florida-part-2/).

President Madison was the first to state the concept that the United States would remain continue to remain neutral in any European conflict and oppose any attempt to suppress independence movements in Central and South America. When he made this statement in his last State of the Union address, Madison was clearly sending a message to European rulers and again laid out our neutrality.

What is officially known as the Monroe Doctrine came later when, in Monroe’s seventh State of the Union address in 1823. When he spoke, he, like Madison before him, was addressing European leaders. What is not well known is that the Monroe Doctrine again states that the U.S. will remain neutral in any European conflict.

A succession of U.S. presidents kept to this policy and it was not until World War I that U.S. forces were deployed in Europe.

Posted in Blog, Geopolitics and tagged The Monroe Doctrine was first stated by James Madison