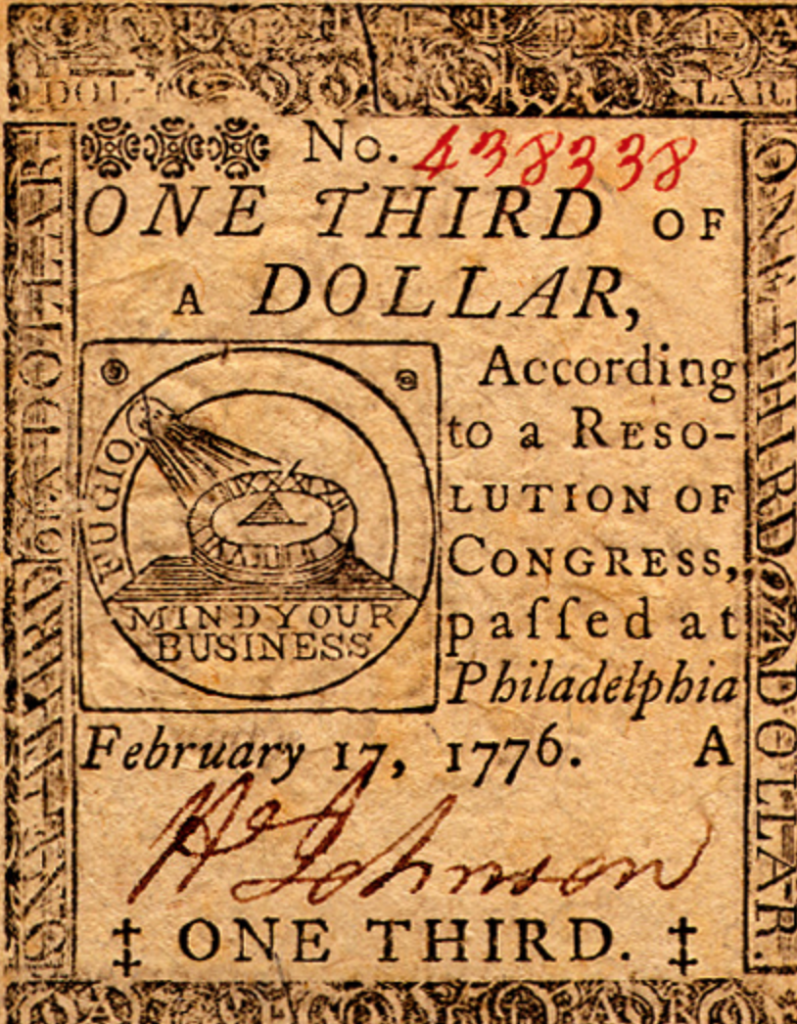 Before the Battle of Lexington and Concord, currency (paper money) and specie (coins) were regulated by the British Parliament. In 1751, 1764 and as late as 1773, British Currency Acts regulated what money could be printed in the colonies. Even with these restrictions, each of the Thirteen Colonies printed their “own” paper money.

When the war broke out, residents of the Thirteen Colonies had three ways they could pay for goods. Coins, paper money and what is often referred to as “commodity money,” e.g. 20 pounds of tobacco is worth three chickens.

Adding to the confusion, English pounds in both coin and paper were used throughout the colonies and were the de facto “standard.” However, Dutch guilder and Spanish dollar coins were also prevalent.

Money was denominated in pounds, shillings and pence by some colonies, as dollars in others. However, once the war broke out, each of the Thirteen Colonies became an independent nation and it was not until the Articles of Confederation was ratified in March 1781, were the colonies bound together by much other than a desire to kick the British out.

As such each of the Thirteen Colonies were free to print their own money and many did. So did the Continental Congress which issued the Continental dollar. Adding to the confusion was that Massachusetts pound was not valued at the same value as one from Pennsylvania. Exchange rates were highly negotiable.

The ratification of the new Constitution in June 1788 enabled the Federal government to reform our currency. Article 1, Section 8, Line 5 states “The Congress shall have the power to “coin money, regulate the value thereof, and of foreign coin, and fix the standards of weights and measures.”

Mindful of what happened during the war for independence, the drafters of the Constitution included another clause, Article II, Section 10, Line 1 says “No state shall enter any treaty, alliance or confederation grant letters of marque and reprisal; coin money, emit bills of credit, make any thing but gold and coin a tender in payment of debts…”

Robert Morris, financier who helped fund the revolution went to work after he was appointed the Superintendent of Finance. Morris started the Bank of North America which would accept U.S. dollars in exchange for gold and silver coins. He also created the first U.S. mint to create coins. His work (along with what Alexander Hamilton did later) created a stable financial system that set the stage for America’s growth in the 19th and 20th Century.

Posted in Blog, Social and Economic and tagged Money without backing is soon worthless