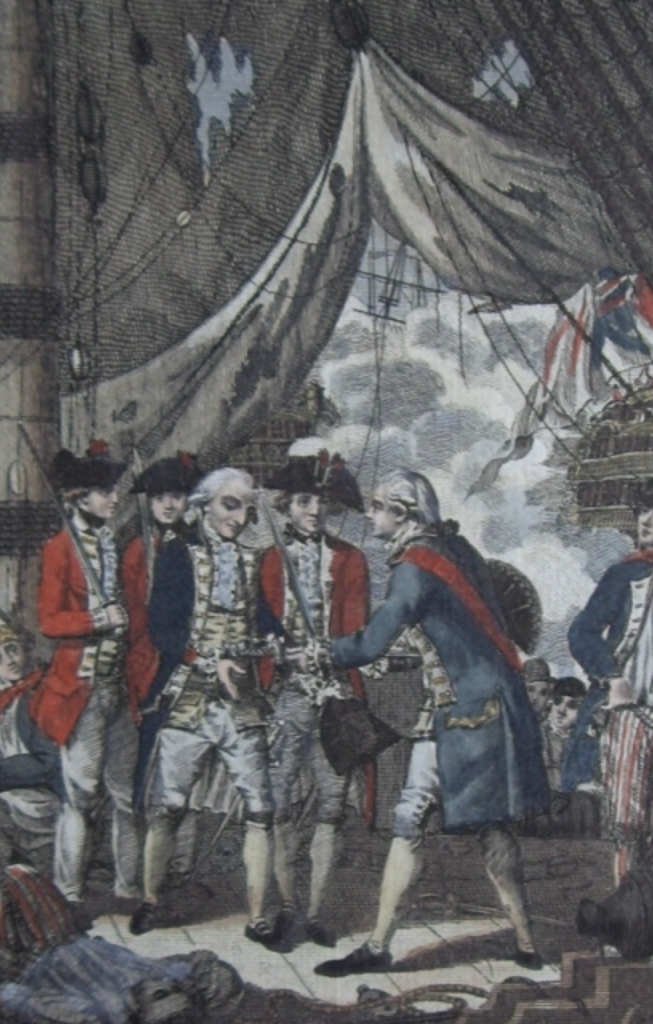 By early 1782, the British knew they had lost the war against the Thirteen Colonies. Cornwallis had surrendered in October 1781 and Parliament dictated that offensive operations in North America shall cease. North’s government fell in March 1782 and the new government under Lord Rockingham opened negotiations to end hostilities.

But the fighting continued. General Greene was slowly regaining control of Georgia and South Carolina but Savannah and Charleston were still occupied and General Clinton was still holed up in New York.

A separate alliance, unknown to the Americans pit France and Spain against Britain. Spain desperately wanted Gibraltar back and the French wanted control of the Caribbean. By 1782, the French had captured Dominica, Grenada, Saint Kitts, Saint Vincent and Tobago.

With Gibraltar under siege by a combined Spanish/French force, the three Spanish and French goals in 1782 were (1) continue to aid the Americans and help them recapture their cities; (2) capture the last of the British held Windward Islands – The Grenadines; and (3) conquer Jamaica.

Britain anticipated the Franco-Spanish plan and sent Vice Admiral George Rodney and Rear Admiral Samuel Hood and a fleet of ships to the Caribbean to prevent further losses of British territory. French Admiral deGrasse was in command of the combined Spanish/French fleets as well as an invasion force that would attempt to take Jamaica.

The two fleets met off a small cluster of islands known as The Saintes located in the Guadeloupe Channel between Guadeloupe and Dominica. The battle took place between April 9th and April 13th, 1782 and was a disaster for the French and Spanish. British seamanship, tactics and gunnery carried the day. DeGrasse and his flagship were captured. In the battle, French and Spanish lost 7,000 to 8,000 men while the butcher bill for the Royal Navy was 243 dead and 813 wounded.

France’s defeat at Saintes meant that the French navy would not take on the Royal Navy’s North American squadron protecting Clinton in New York. Nor would there be any aid to General Greene to help him recapture Charleston and Savannah.

The battle effectively knocked France out of the war in North America. Already deep in debt and realizing that they could not afford the siege against Gibraltar as well as help the Americans, the French used the repatriation of deGrasse as the vehicle to open negotiations with the British. Neither the British nor the French bothered to inform the Americans.

By directly negotiating with the British without the Americans, the French knowingly violated the Treaty of Alliance and the Franco-American alliance fell apart. In the end, the French lost more than they gained. In North America, Britain regained all the islands they lost and kept Canada and Newfoundland. France’s only gain was that it kept the Caribbean island of Tobago and some turf in Senegal. The siege of Gibraltar failed and Spain’s treaty with Britain allowed it to keep the island of Minorca but nothing else.

The agreement didn’t become effective until May 4th, 1784 under a fourth British government led by William Pitt who became prime minister on December 19th, 1793. He would lead the country until March 4th, 1801 and would spend most of his time in office fighting the French!

Image is a 1795 engraving of deGrasse surrendering to Rodney by an unknown artist.

Posted in American Revolution, Geopolitics, Navy and tagged The battle in the Caribbean that changed the territory the U.S. would get in the Treaty of Paris