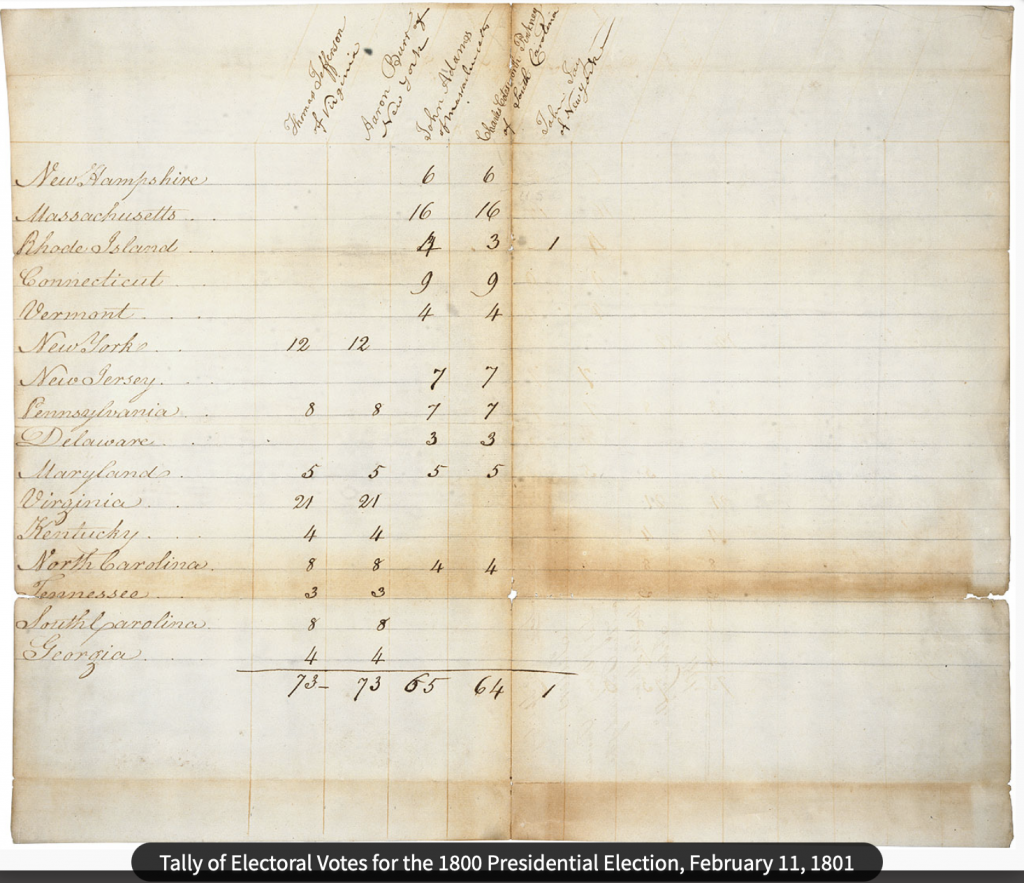 The election of 1800 represented a nightmare scenario for the Founding Fathers and the Constitution they wrote in 1787. When wrote Article II Section 1, the assumption was that there wouldn’t be a tie in the electoral college.

In just the third election since the Constitution was ratified in 1789, there was a tie and the vote went to the House of Representatives. It took 35 votes before Alexander Hamilton brokered a deal that gave Jefferson win by a single vote.

As the leader of the Federalist Party, Hamilton wanted Adams back in the presidency but also realized that was not going to happen. He saw Jefferson as the lesser of two evils, the other was a fellow New Yorker by the name of Aaron Burr.

So the question was, how does the Congress and the country fix the problem before the next election. Both the Federalists and the Democratic-Republicans agreed that the amendment had to be ratified before the election of 1804.

With the election of Jefferson in 1800, the Democratic-Republicans had solid majorities in both the House and the Senate. This positioned them well to ensure that if a tie occurred in 1804, they could ensure that their candidate would win the presidency.

The wording of the amendment began in the New York legislature in 1801. There were several versions, but none passed. However, the idea made it to the House of Representatives which formed a 17-member committee with one representative from each state.

Some representatives argued that only the top three candidates should put before the House for a vote. Others, mostly from the Northern states, wanted to abolish the Electoral College altogether.

Much of the debate centered around the number of candidates the House should consider – three candidates or up to five. Those opposed to fewer posited that it would give too much power to the larger states.

As ratified, the Twelfth Amendment does not change the composition of the Electoral College. What it does do is change the process to the one we still follow today, i.e.:

New Hampshire’s ratification on June 15th, 1804 made it the 13th state to ratify and its approval gave the amendment the constitutionally required three-fourths majority. Tennessee was the 14th state to ratify the 12th Amendment on July 27th, 1804 which made it possible to conduct the election of 1804 under its terms. Massachusetts finally ratified the amendment in 1961! As of the date of this post, Delaware rejected the amendment on January 18th, 1804 and Connecticut did the same on may 10th, 1804. To this date, neither Connecticut nor Delaware have ratified the 12th Amendment.

In the election of 1824, the Electoral College was again deadlocked. Andrew Jackson received 99 electoral votes; John Quincy Adams 84; William Crawford 41; and Henry Clay 37. Before a vote could be taken, Crawford has a stroke and dies leaving only four candidates.

Jackson believed he would carry the day since he had won the popular vote. However, the Speaker of the House Henry Clay endorsed John Quincy Adams (John Adams’ son) and it was enough to elect Adams president. The Vice President, John Calhoun was elected vice president.

Image is of the tally sheet (courtesy of the U.S. Archives), in the House Of Representatives in which Thomas Jefferson was elected president.

Posted in Blog, U.S. Politics and tagged Vote tally sheet for the first vote in the House of Representatives in 1800