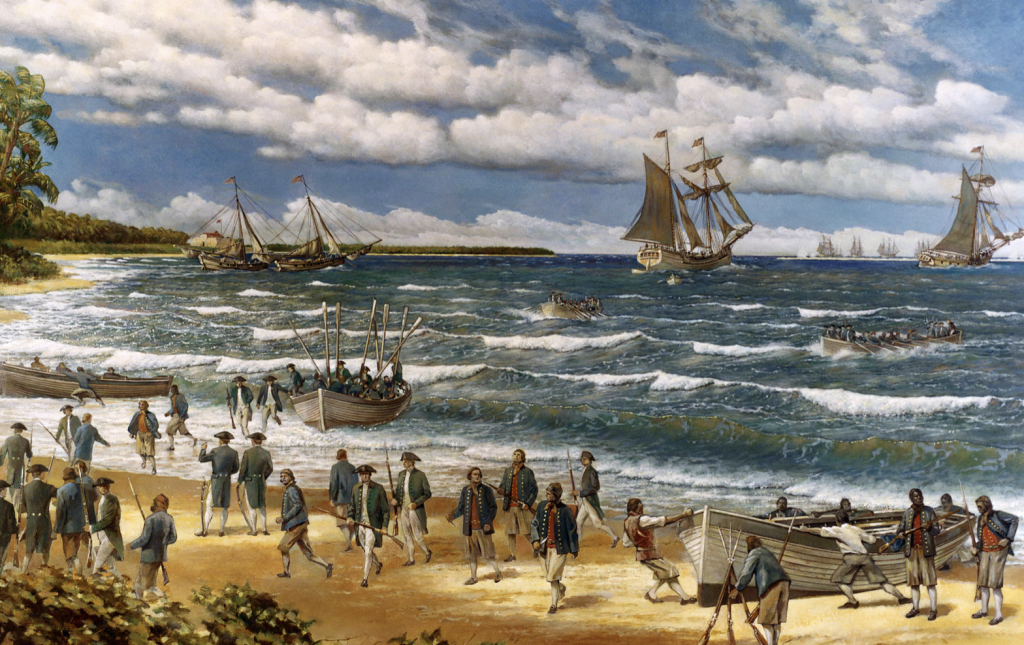 Until the French Army arrived in 1780 the American Revolution, the Continental Army and Navy were always short of powder and musket balls. The British would never have taken Breed’s Hill (a.k.a. to history as Bunker Hill) if the Continentals hadn’t run out of powder.

The Continental Navy was created on October 13th, 1775, and the Marine Corps on November 10th, 1775. Its first mission, once the navy had enough ships to form a small squadron, was to seize the Royal Navy’s store of powder and shot in Nassau on New Providence Island in the Bahamas.

When Commodore Esek Hopkins was given his orders in December 1775, the Royal Navy had 355 rated ships of 20 guns or more. His Continental Navy squadron had two small frigates Alfred and Columbus, each with twenty 9-pounders and ten 6-pounders; two brigs – Cabot, and Andrea Doria each with fourteen 6-pounders; and the sloop Providence with twelve 4-pounders. Hopkin’s squadron sailed from Philadelphia with 234 men in the newly formed United States Marine Corps in detachments on his five ships.

After being frozen in the ice of Delaware Bay for a month, Hopkins’ squadron arrived on March 1st and anchored off Abaco Cay. Waiting for him was the two masted schooner Wasp armed with eight 2-pounders; the sloops Hornet with ten 4-pounders and Fly with six 6-pounders who had captured two sloops owned by Loyalists. Every ship in Hopkins force was converted merchantmen, not purpose-built warships.

There were two forts guarding the town of Nassau on Grand Bahama Island – Fort Montagu and Fort Nassau – and the intelligence Hopkins had received before he left was that most of the powder was stored in the magazine at Fort Nassau.

The landing force was transferred to the two sloops and escorted by Providence, they sailed into the harbor with the hope of surprising the British and seizing the two forts. The cannons at Fort Montagu opened fire and the landing force withdrew.

John Paul Jones, the first lieutenant (or executive officer) on Hopkins’ flagship Alfred strongly pushed blockading the harbor, but Hopkins refused. Instead, the landing was made the next morning about a mile from the harbor under the command of Captain Nicholas.

Hopkins came ashore once the beachhead was secured. As the Marines, augmented by about 50 sailors approached the town, they were met by a British Army lieutenant. Hopkins demanded the British surrender, the officer asked for 24 hours which Hopkins accepted.

During the night, the British loaded 150 of the 200 casks of powder in Forts Nassau and Montagu onto Mississippi Packet and H.M.S. St. John. Around 2 a.m., the ships slipped out of the harbor headed for the British base in St. Augustine Florida. Hopkins refusal to follow Jones suggestion to blockade Nassau harbor cost the Continentals their most desired prize.

The next day, the British surrendered the town of Nassau. While the raid did capture 90 cannon, 15 mortars and some powder and shot, it was not nearly the quantity as had been hoped. Nonetheless, the operation was considered a success and was the first landing by U.S. Marines on foreign soil.

Posted in Blog, Navy and tagged Marines' first landing on a foreign shore