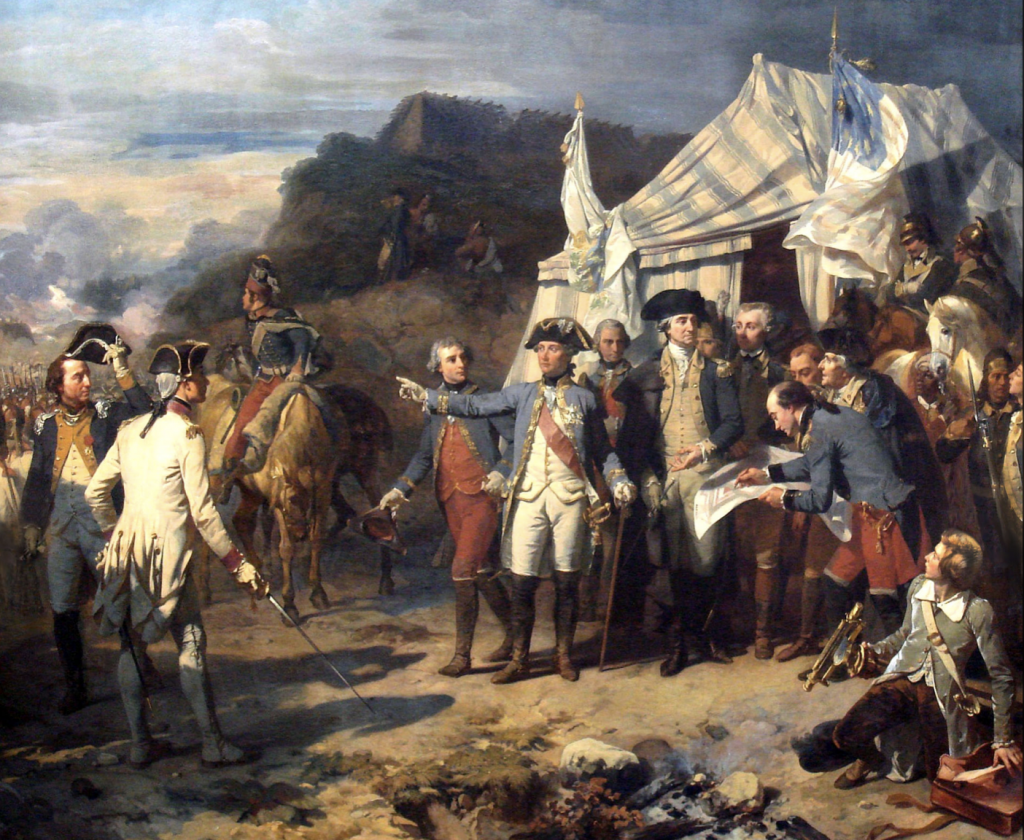 Arguments can be made as to which battle of the American Revolution was the most significant – Lexington & Concord, Saratoga, Guilford Court House, Long Island, Trenton – but none of the complexity of Yorktown’s logistics and maneuver.

In the spring of 1781, there was fear in Clinton’s mind that the Americans movements in the South were trying to weaken his garrison in New York so they could retake the city. His intelligence on Washington’s intentions and intent caused him to believe that Washington’s army numbered more than 10,000 and were only a short march from the Hudson River.

What was kept from Clinton was that the Continental Army was down to less than 7,000 men, short on food, clothing, money, ammunition, and most of all morale. Washington managed to keep the army together despite two mutinies, not over orders, but the lack of “stuff” needed to keep an army in the field.

The French army of 4,800 in North America was wintering in Rhode Island. In a meeting in Wethersfield, CT, Washington and the Comte de Rochambeau met on May 23rd and 24th, 1781. While Washington favored a move on New York, Rochambeau preferred to go after Cornwallis in Virginia. Washington ultimately agreed.

Washington was not told that Rochambeau’s orders to de Grasse gave him the option of blocking the entrance to Chesapeake Bay or take his fleet north and raid Nova Scotia. It was only after Cornwallis was defeated that John Laurens, who would ultimately lead the negotiations that resulted in the 1783 Treaty of Paris, learned of the ambiguity in the orders given to de Grasse.

With his army marching south, in July 1781, Washington sent a new set of orders to Lafayette whose force was augmented by the troops led by Generals Greene and Morgan. They were to prevent Cornwallis from returning to Charleston.

Banestre Tarleton tried to convince Cornwallis that he should attack the Americans, given the British advantage in numbers and artillery. Cornwallis refused based on Clinton’s assurances that he was sending reinforcements.

The French Army’s artillery and the bulk of its ammunition sailed south on August 21st, 1781 from Newport, RI in ships commanded by the Comte de Barras. He led his fleet well into the Atlantic to avoid contact with the Royal Navy. On August 30th, the French navy under DeGrasse lands 3,000 French soldiers and artillery at Jamestown, VA and then sails to block the entrance to Chesapeake Bay.

After the September 5th, 1781, naval battle known as the Battle of the Virginia Capes in which de Grasse’s fleet defeated the Royal Navy under Admiral Thomas Graves, de Barras’ ships entered the Chesapeake. At the time of the naval battle, Cornwallis had 7,000 men – 2,000 Germans, 7,000 British Army – under his command, Lafayette, 7,000 – 4,000 Americans and 3,000 French.

On September 19th, 1781, the combined Continental and French Army reached the small Maryland town of Elkton. Some were embarked on whatever ships they could find and send south to join Lafayette. De Barras sent his smaller ships to Baltimore where the bulk of the combined army was embarked. This amphibious movement to Jamestown, VA saved weeks of marching and enabled the combined army of 10,000 to arrive relatively “fresh” and ready for battle.

By the 26th, the amphibious lift was completed and now, Washington had approximately 17,000 under his command. The siege of Yorktown officially began on September 29th and by the 19th of October, it was over.

What is ironic is that on September 18th, British General Sir Henry Clinton decided that he would not send reinforcements to Cornwallis until the Royal Navy had again gained control of the Chesapeake. This sealed Cornwallis’ fate.

Even with the British Army’s defeat at Yorktown, the war was far from over. However, the victory set in motion a series of events that would lead to the 1783 Treaty of Paris, one of which is the fall of Lord North’s government in March 1782.