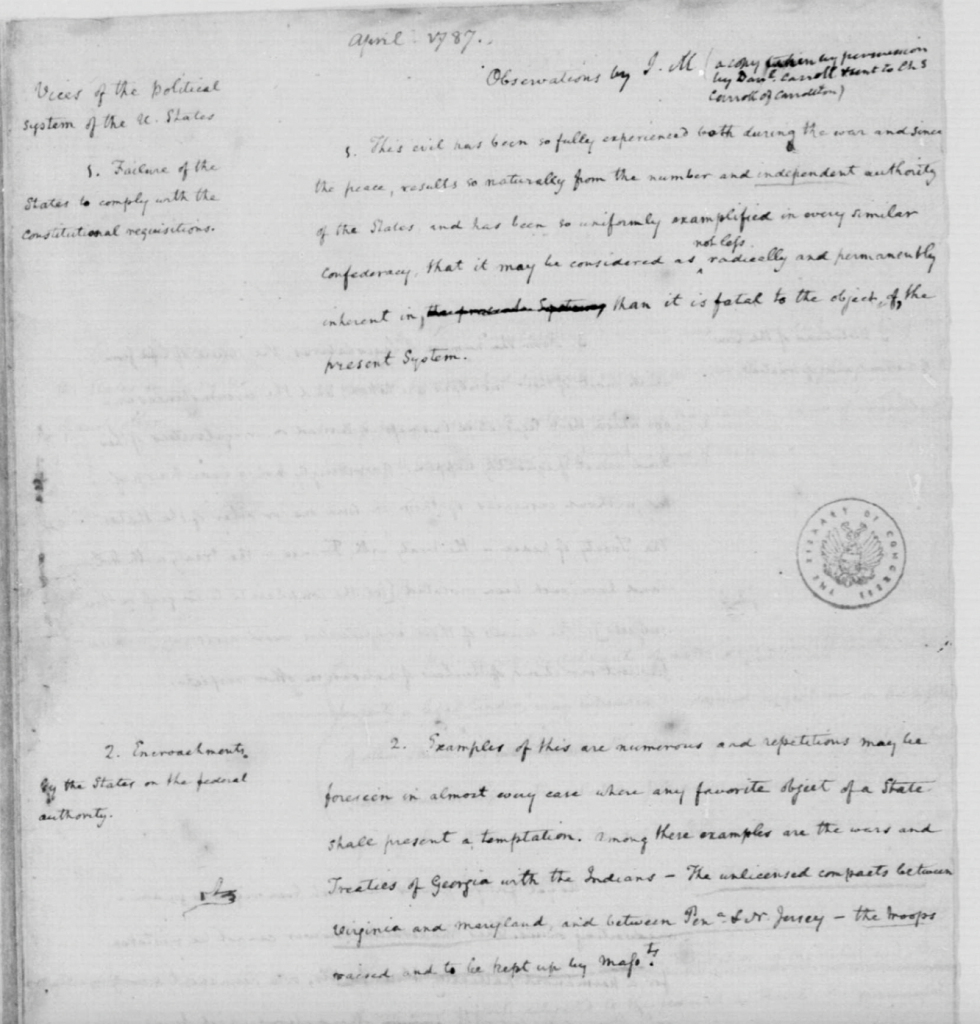 The Articles of Confederation were drafted and passed on November 1st, 1777, almost a month after the Battle of Saratoga had been won in October 1777. It would take four years before Maryland became the last colony to ratify the Articles of Confederation on February 2nd, 1781. When notified of the Maryland vote, on March 1st, 1781, the Continental Congress made them the governing law of the land.

The Founding Fathers, knew before the ink was dry on the Articles of Confederation that it was an imperfect document. Drawn together by a desire to kick the British out, the Thirteen Colonies, now called states, began to squabble amongst themselves.

The economies of some states recovered more quickly than others from the war that devastated the countryside. Exports resumed – indigo, rice, lumber, dried fish, dried corn, cotton, all needed by European customers resumed.

Yet, squabbling amongst the colonies began over territory, commercial rights to fishing certain waters, which state could tax what and for what reason, etc. etc. After the heartbreak and trauma of eight years of war, the Founding Fathers were not going to allow the new country dissolve into thirteen little kingdoms such as found all over Europe.

They knew there had to be a better way. The Constitutional Convention of 1787 began on May 25th, 1787, just over three years from the day the Treaty of Paris that ended the American Revolution went into effect. By September 17th, 1787, the convention had a draft to send to the states for ratification. On June 21st, 1788, New Hampshire became the ninth state to ratify the Constitution. The Articles of Confederation were now officially dead.

What is not well known is that 11 days before the Constitutional Convention began, Virginia Delegate James Madison arrived in Philadelphia. The future president of the United States penned a document called “Vices of the Political System of the United States.”

This document was a thorough examination of the plusses and minuses of the Articles of Confederation. In it he laid out his ideas of how a future strong central government might be structured. One that had the power to tax, regulate both interstate and foreign commerce, maintain an army and navy, and conduct foreign policy.

Madison’s vision gave the central government a court system that could force the individual states to comply with laws passed by the national legislature. His idea was that the legislature would consist of two houses. One would be based on the state’s population and the other would have the same number of representatives for each state regardless of territory or residents. Madison believed that his concepts would provide a balance of power between the courts, legislature and executive branches.

A printed version of this document was given to all the delegates at the beginning of Constitutional Convention. Later, John Adams, also a member of the Convention and our second president, said Madison’s ideas avoided the “tyranny of the majority.”

What Madison wrote became the template for the U.S. Constitution. Most of Madison’s ideas  made it into the final document. We have to thank James Madison for creating the blueprint of the longest serving document of its kind in the world. If you want to read Madison’s “Vices of the Political System of the United States,” go to this link – https://founders.archives.gov/documents/Madison/01-09-02-0187

One final note on this Memorial Day weekend. The oath that those who serve in the military, Federal police or hold an elected Federal office take states that we “swear to uphold and defend the Constitution of the United States against all enemies, foreign and domestic…”

We should keep in mind that for the past 233 years since the document was ratified by New Hampshire on June 21st, 1788, over 1.3 million Americans have given their lives in the defense of our country. Many more have suffered debilitating wounds and psychological trauma. We should, this and every Memorial Day weekend, remember and thank them for their sacrifice.

Image is the first page of Madison’s “Vices of the Political System of the United States” courtesy of the National Archives.

Posted in Blog, U.S. Politics and tagged Madison's blueprint outlines what should be in the U.S. Constitution