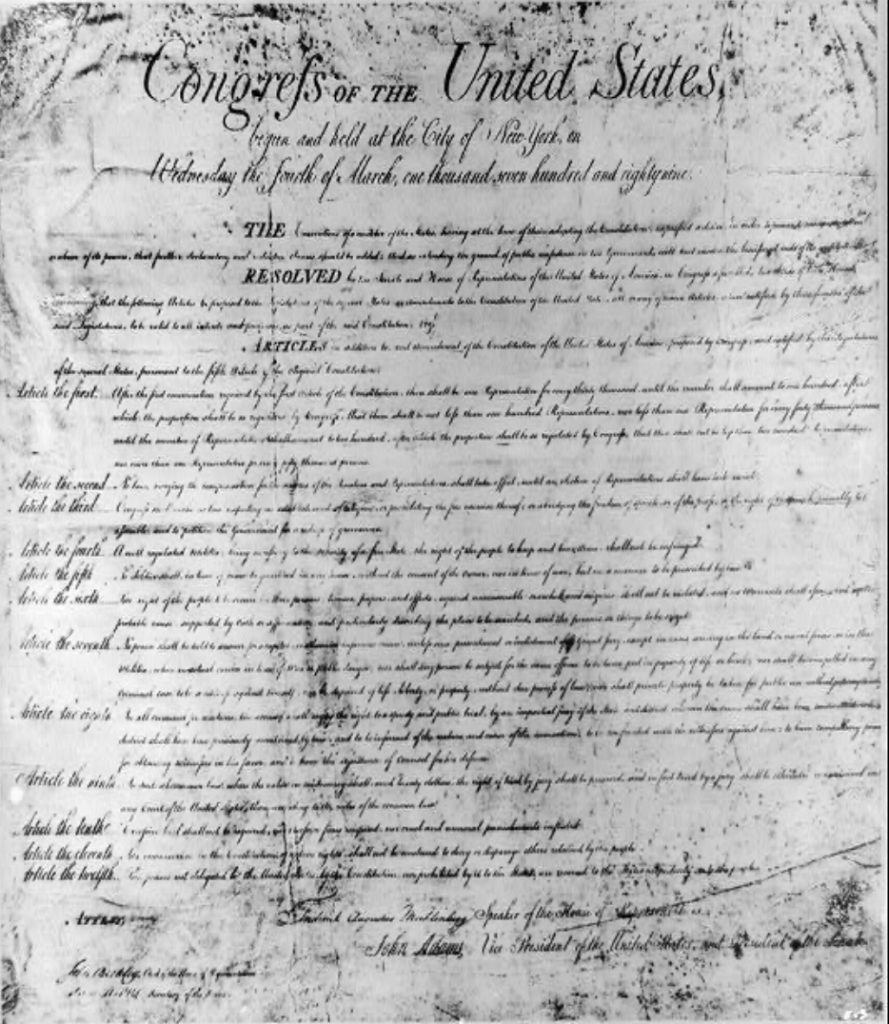 The first 10 amendments to the U.S. Constitution are known as the Bill of Rights. They were written and passed by the First U.S. Congress However, what is not well known is that James Madison who wrote most of the words in the Constitution originally proposed 17 amendments to the Congress! So what were they and what happened to them?

Three times in 1789 – August 24th, September 5th, and September 25th – the First Congress voted to ratify Madison’s amendments either as originally written or as modified by the legislative body. By the time the First Congress adjourned, all but three of the 17 worked their way into the 10 amendments that made up the Bill of Rights.

Madison’s First Article proposed to establish the House of Representatives as a legislative body with a minimum of 100 members and each Congressional district should have no more than 30 thousand citizens. That is, until there are more than 200 members of the house and then the districts can have no more than 50 thousand voters.

The First Article failed to pass on the first vote on August 24th, 1789, nor was it approved on September 9, 1789, or September 25th, 1789. Known as the Congressional Apportionment Amendment, its official status is, as of the date of this blog post, still “pending.”

Madison’s Second Article of his 17 proposed amendments covered compensation for the members of both houses of Congress. Initially written as “No law varying the compensation to the members of Congress shall take effect until an election of Representatives have intervened.” In other words, Congress can only vote on a pay raise or cut until after an election. This amendment also failed to pass on August 24th, 1789, September 5th, 1789, and September 25th, 1789. More on this amendment later in this post.

One could say that the separation of powers stated in this proposed amendment are laid out in the Constitution. However, given our history in which each branch of government has on more than one occasion overstepped its boundaries. If these words were included in the Preamble to the Bill of Rights, if nothing else, they would have clarified the intent of the Founding Fathers not to have three branches of government stepping on each other’s toes.

Which brings us back to Madison’s Second Article that became our 27th Amendment on May 5, 1992, some 203 years later. The how and why this took so long will be the subject of next week’s post.

Image is a photo of the original Bill of Rights, courtesy of the Library of Congress.

Posted in Blog, U.S. Politics and tagged Bill of Rights was passed during the First U.S. Congress