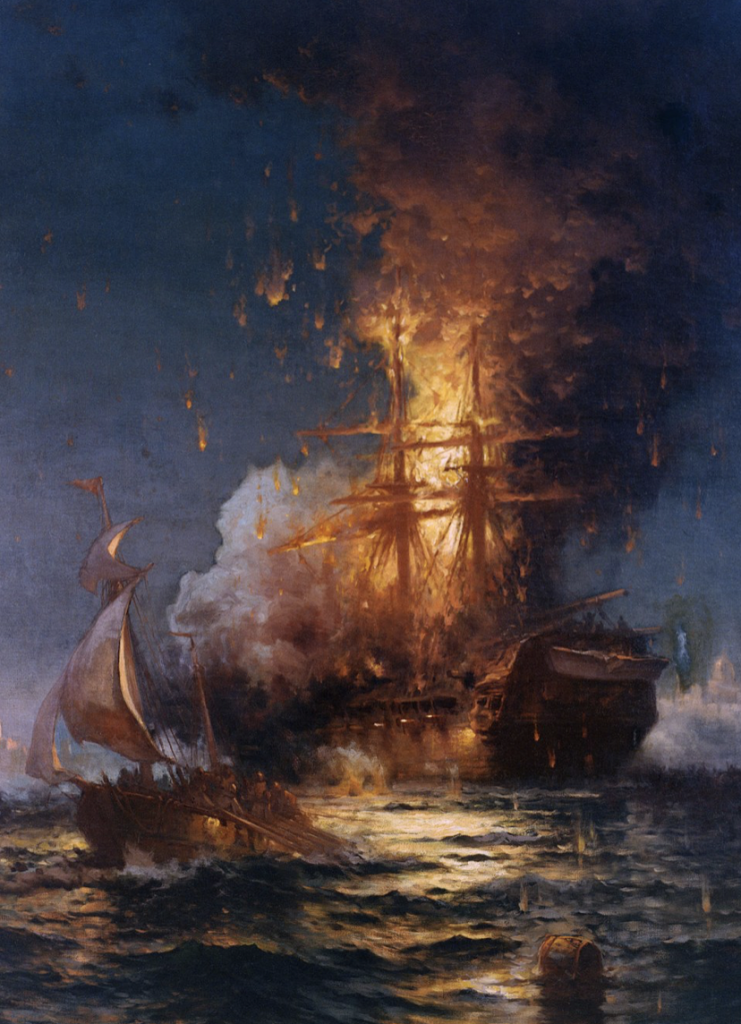 Not long after Thomas Jefferson was sworn into office on March 4th, 1801, he was faced with a vexing foreign policy problem. He, along with his party – the Democratic-Republicans had campaigned against the U.S. government maintaining a standing army and navy. With the Quasi War over and a peace treaty with France signed in 1800, Jefferson ordered that the budget for the Army and Navy be cut back.

Jefferson wanted to replace the frigates that had been built under the Adams administration with a fleet of small, lightly armed ships to patrol the U.S. coast. This would allow Jefferson to claim his administration “had a navy” albeit one that was little more than a coastal constabulary.

Unfortunately for Jefferson, his utopian view of an agrarian, non-industrial U.S. society that didn’t need commercial relationships with countries outside North America flew in the face of reality. The major powers had been almost continuously engaged in a war in Europe, Africa, and India since 1792.

In the Mediterranean, the pirates, a.k.a. Barbary Pirates based in modern Algeria, Libya, and Tunisia, knew better than to take French or British flagged merchant ships. Those of smaller nations, particularly those from a country without a strong, sea going navy were fair game.

To be fair to Jefferson, the Washington and Adams Administrations had been paying tribute to the Bey’s who ran these small nation states. Jefferson had seen the greed first-hand when John Jay and he negotiated a treaty in 1796 with the Bey of Algiers to pay $642,500. To make the payment, the U.S. government had to borrow the money!

For the Democratic-Republicans, this was a watershed moment. They didn’t want to have the Federal government borrow money or impose taxes to fund an Army or Navy. The treaty and its payment forced the government take on debt to pay tribute to a foreign power.

The reason that the Washington and Adams administrations agreed to paying the tribute was that U.S. did not have a standing army or Navy. In 1794, Adams pushed through Congress the Navy Act against strong opposition from Jefferson and the Democratic-Republicans. Adams had no choice. Without a strong, sea going navy to protect U.S. merchant ships, tribute was the only option.

In 1801, the Bey of Tripoli had canceled the 1796 treaty and declared war on the U.S. and began seizing U.S. merchant ships. He demanded millions to stop and Jefferson refused to pay. He believed that now was the time to use military force.

From a foreign policy perspective, Jefferson’s choices were limited. He couldn’t approach England or France or their allies for help because they were at each other’s throats. Luckily, he still had the navy created under the Adams administration which was sent to the Mediterranean. (See March 17, 2019, post – Piracy, the Midwife of the U.S. Navy – https://marcliebman.com/piracy-the-midwi…-of-the-u-s-navy/ ).

There were other nations who wanted to stop the piracy. The Kingdom’s of Naples, The Kingdom of Sicily along with Sweden quickly joined in the effort to suppress the Barbary Pirates.

The U.S. squadron which consisted of almost the entire U.S. Navy along with several Swedish frigates raided and blockaded the ports used by the Barbary Pirates. Some of the most famous actions of the early U.S. Navy took place during this campaign in which the fledgling U.S. government and its navy waged a successful campaign far from its shores.

In June 1805, a peace treaty was signed that freed all American and foreign sailors being held captive by the Barbary Pirates. Note, the treaty required the Jefferson administration to pay $60,000 to the pirates. Jefferson called the payment a “ransom,” not tribute. The decision in 1805 to pay the money was as unpopular then as it is today.

Image is the 1897 Edward Moran painting of the burning of the U.S.S. Philadelphia in Tripoli Harbor courtesy of the Navy History and Heritage Command.

Posted in Blog, Geopolitics and tagged Piracy in the Med was a vexing problme for Jefferson