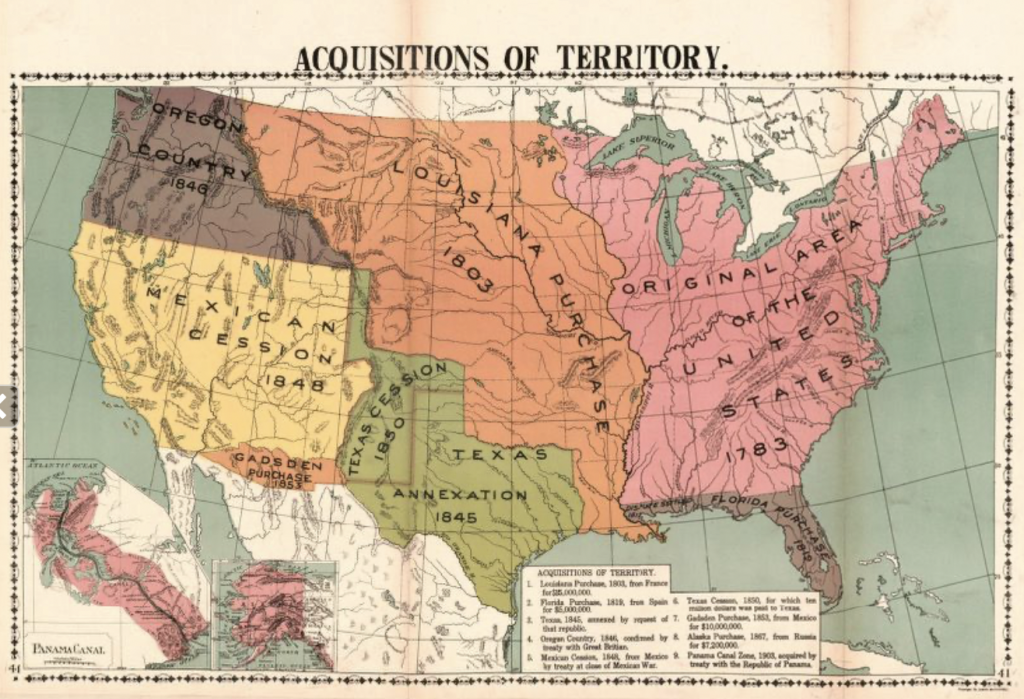 In 1802, Europe was taking a break from war. Signed on February 9th, 1801, the Treaty of Lunéville ended hostilities between the French and the Holy Roman Empire. The War of the Second Coalition officially ended with the Treaty of Amiens in which the British, French, and Spanish agreed to stop shooting at each other which was signed on March 25th, 1802.

Here in the U.S., Jefferson was under pressure to acquire the city of New Orleans. Why? Toward the end of the War of the Second Coalition, the Spanish, which controlled the land south of Georgia to the Mississippi River, were making noises that they were going to close the port and deny access to the Mississippi.

In the early 19th Century, the U.S. was an agrarian nation and rivers were the way farmers and merchants shipped their goods to ports so they could be exported. The large rivers, e.g., the Allegheny, Monongahela, Ohio, Hudson, and Mississippi were its interstate highway system. Merchants and framers in the new states of Kentucky – which became a state on June 1st, 1792, and Tennessee – which joined on June 1st, 1796 – and Ohio which was about to join used these rivers.

Suspecting a deal might be possible, Jefferson sent Robert Livingston and later James Madison to France to learn if the French were willing to sell the port of New Orleans and the river delta to the U.S. France had reacquired the Louisiana Territory from Spain in the secret Third Treaty of Ildefonso signed in 1800. What the Americans didn’t know was that early in 1803 Napoleon had decided that defending the Louisiana Territory was impossible. Plus, he needed money for future campaigns in Europe.

As a result, Napoleon offered to sell what became the Louisiana Purchase to the U.S. His initial price was $22 million which was far more than the $10 million Livingston and Madison were authorized to pay.  Ultimately, the price was negotiated down to $15 million. See April 4th, 2021, post “Jefferson’s Big Land Buy” – https://marcliebman.com/financing-the-louisiana-purchase/ for the story of how the purchase was financed.

Besides getting Congress to appropriate the additional $5 million, Jefferson wasn’t sure the purchase was constitutional. Jefferson, who besides Madison, probably knew more about the intent of the words in the U.S. Constitution than any other man alive.

Article II, Section 2, Clause 2 gives the President the power to negotiate treaties and the Senate the duty to ratify them. The power to purchase land from a foreign nation is not listed amongst the presidential powers.

At first, Jefferson thought he would need to pass a Constitutional Amendment. Madison and Albert Gallatin, Jefferson’s Secretary of the Treasury, thought not.

Jefferson and his allies faced an October 31st, 1803, deadline to ratify the treaty which facilitated the purchase. Jefferson decided to take his chances and seek Senate ratification.

The senate voted 24 to 7 in favor of the purchase. The treaty was ratified on October 31st, 1803, but Jefferson was still afraid that if it was contested, the agreement would be overturned in the Supreme Court.

He need not have worried. Years later in 1823, Supreme Court Chief Justice John Marshall wrote in the majority opinion on American Insurance vs. Canter, “The Constitution confers absolutely on the government of the Union, the powers of making war, and of making treaties; consequently, that government possesses the power of acquiring territory, either by conquest or by treaty.”

Since the Louisiana Purchase, every major U.S. acquisition of foreign territory has been via a formal treaty, to wit:

1846 – Oregon Territory via the Oregon Treaty with Great Britain

1848 – Mexican Secession via the Treaty of Guadalupe Hidalgo

1853 – Gadsden Territory via the Gadsden Treaty with Mexico

Now you know one of the legacies of the Louisiana Purchase…

Posted in Blog, U.S. Politics and tagged Map showing the growth of the U.S.