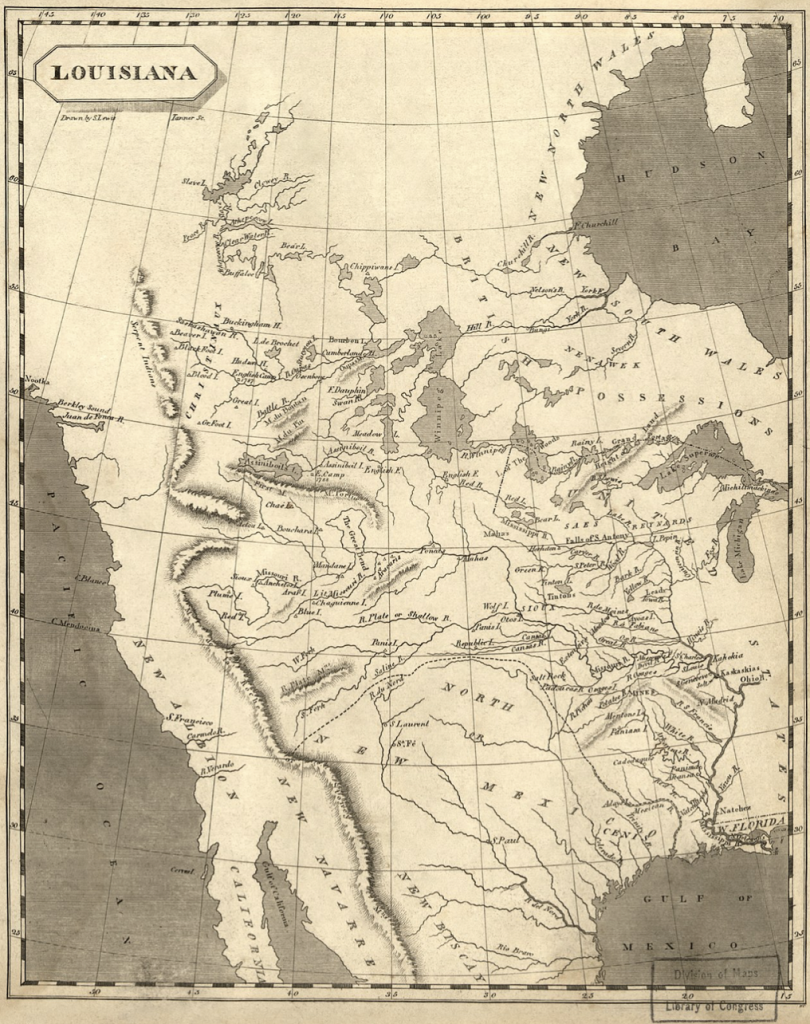 Even before the U.S. had “digested” the land the fledgling United States acquired from England through the Treaty of Paris, its third president, Thomas Jefferson wanted more land. Known as the Louisiana Purchase, the un-surveyed territory included parts or all of 15 future states and two Canadian provinces.

Louisiana was the southern anchor of France’s presence in North America and changed hands several times during the 18th Century. After France’s defeat in the Seven Years war, in 1762 the territory was split. Land east of the Mississippi went to Great Britain and everything west of the river was ceded to Spain.

Through the secret 1762 Treaty of Fontainebleau, Spain gave the Louisiana territory to France. French citizens living east of the Mississippi who didn’t want to live under British rule were allowed to migrate to land west of the “Big Muddy.” Later, they learned they were now subjects of King Carlos of Spain. None of these terms were disclosed while France was negotiating the 1763 Treaty of Paris that ended the Seven Years War.

Twenty years later, as part of the Treaty of Paris that ended the American Revolution, England gave the new U.S. all its land south of Canada and east of the Mississippi. The boundary between the U.S. and Spanish Florida was ill defined.

In 1794, Spain closed the Mississippi to American merchants. America’s ambassador to Great Britain, Thomas Pickney, negotiated a treaty with Spain known by three names – Pinkney’s Treaty, Treaty of San Lorenzo or Treaty of Madrid to more precisely define the southern boundary given to the U.S. by England in the Treaty of Paris. Signed on October 27th, 1795, the document established the northern border of the state of Florida and the southern borders of what are now the states of Alabama and Mississippi along the 31st parallel.

Spain, however, had designs on other territory. With war raging in Europe, Spain and France negotiated Third Treaty of San Ildefonso treaty signed in October 1800. Through this secret deal, Spain traded the Louisiana territory back to France for the Italian dukedom of Tuscany.

In the Caribbean, in 1801 Napoleon was trying to put down a slave rebellion in Haiti led by Toussaint Louverture. Jefferson followed a two-faced policy. Publicly, he said the U.S. was neutral but covertly, he sent munitions to the rebels.

Armed with accurate intelligence on French intentions in North America, Jefferson sent his Secretary of State James Monroe who would later become the fifth President of the U.S. and Robert Livingston to Paris to negotiate with Napoleon. The Americans went to France thinking they might be able to acquire New Orleans in order to control access to the Mississippi River.

What they didn’t know was that Napoleon’s had decided to end his attempt at rebuilding France’s empire in North America. He was now focused on France’s traditional enemy England and offered the entire Louisiana territory to the U.S. for then astronomical sum of $15 million (~$313 million in 2021).

There were three obstacles to the deal. One, Spain hadn’t officially turned over the land as per the Third Treaty of San Ildefonso. Two, Napoleon’s foreign minister, Charles Talleyrand (the same man who helped convince King Louis XVI to support the American Revolution) opposed the deal. And last, Jefferson faced opposition in the U.S. The country didn’t have the money.

Federalists in Congress opposed the treaty saying it was unconstitutional. Using Article II, Section 2 of the U.S. Constitution that gives the president the power to negotiate treaties, Jefferson gave the Congress six months to ratify the purchase and raise the needed funds.

The treaty was signed on April 30th, 1803 in Paris but not announced in the U.S. until July 4th of the same year. On November 30th, the Spanish finally turned over the documents officially giving the land to France. The territory was formally turned over to the U.S. in New Orleans on December 20th, 1803.

Image is an 1804 map of the Louisiana Territory.

Posted in Blog, U.S. Politics and tagged The Louisiana purchase came about almost by accident