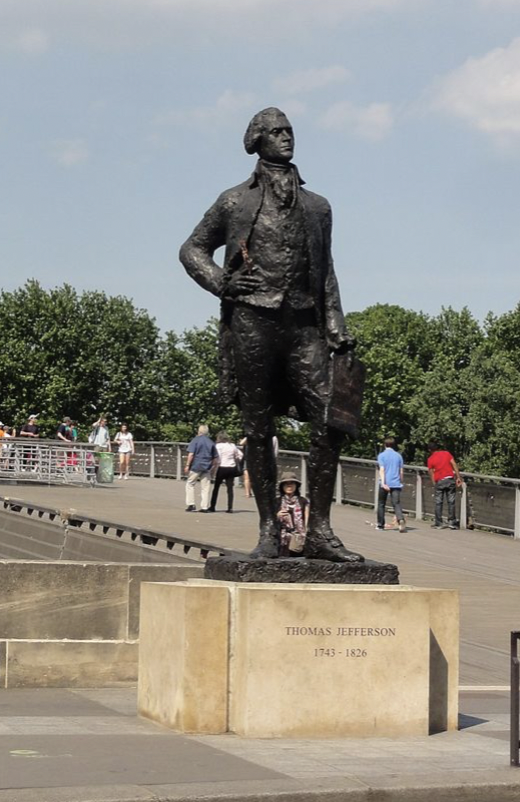 It’s 1789 and the United States has had its first election. George Washington was elected president and John Adams was elected vice president. Washington and most of the Founding Fathers wanted the United States to remain neutral in foreign affairs. This meant no military alliances with any country nor siding with any country in a war. This was a policy Washington expected his cabinet, one of whom was Thomas Jefferson to follow when he appointed him as Secretary of State in the fall of 1789.

Jefferson had been living in France as our Minister (ambassador) to France when the French revolution broke out in in the summer of 1789. He believed France was still a U.S. ally.

Our relationship with France in 1789 was complicated. The U.S. owed the French (and the Dutch and the Spanish) money and we were barely making payments. The 1778 Treaty of Friendship and Alliance with France brought the French into our war for independence and was still in force.

However, the French violated the treaty when they signed the Treaty of Aranjuez in April 1779 and then again when they began negotiating with the British in 1782 to end their involvement in our war for independence. (See blog 12/6/2o20 post – French Diplomatic Duplicity During the American Revolution – https://marcliebman.com/french-diplomatic-duplicity-during-the-american-revolution/ ) To most of our Founding Fathers, the 1778 treaty was no longer in force.

While in Paris, Jefferson saw the unrest against King Louis XVI firsthand. Financially, France was bankrupt. Its people were hungry and overtaxed by a corrupt government. Many French nobles, businessmen, doctors, lawyers, a.k.a. known as the bourgeoise wanted a constitutional monarchy. Others want to create a republic a là the United States.

As our ambassador, Jefferson allowed French revolutionaries to meet at his residence. The Marquis de Lafayette was one of the leaders of the movement to change the French government. He asked his friend, Thomas Jefferson to help write a bill of rights for French citizens and a new constitution for his country. Lafayette’s Declaration of the Rights of Man that he presented to the French Estates General in July 1789 has Jefferson’s fingerprints all over it.

His unequivocal support of the French Revolution’s violence was one of the points that divided the party Jefferson helped found – the Democratic-Republicans – from the Federalists. The Federalists wanted a new French government, not a bloody revolution.

Jefferson was committed to the republican form of government. If an absolute monarchy could not be abolished, a government needed to be put in place that would severely limit is ruler’s power.

There is no doubt that Jefferson was a revolutionary to his very core. When he was Secretary of State, Jefferson wrote in a letter as he watched the French Revolution unfold, “This ball of liberty, I believe most piously, is now so well in motion that it will roll round the globe, at least the enlightened part of it, for light & liberty go together. It is our glory that we first put it into motion.”

The impact of the American Revolution on world history cannot be overstated. What began on April 19th, 1775, along the road from Boston to Lexington and Concord continues to this day. Jefferson was right – we were first and much of the rest of the world has and is following our example.

Image is the statute of Thomas Jefferson at the Quai d’ Anatole in Paris, thanks to WikiCommons.

Posted in Blog, U.S. Politics and tagged Jefferson was a committed revolutionary