This series follows the careers of two men, an American in the Continental Navy and an Englishmen in the Royal Navy. They start as mortal enemies but meet and become friends. Later in the war, they are mortal enemies and throughout their careers, their lives intertwine testing their friendship because sometimes they are looking at each other over a gun barrel. 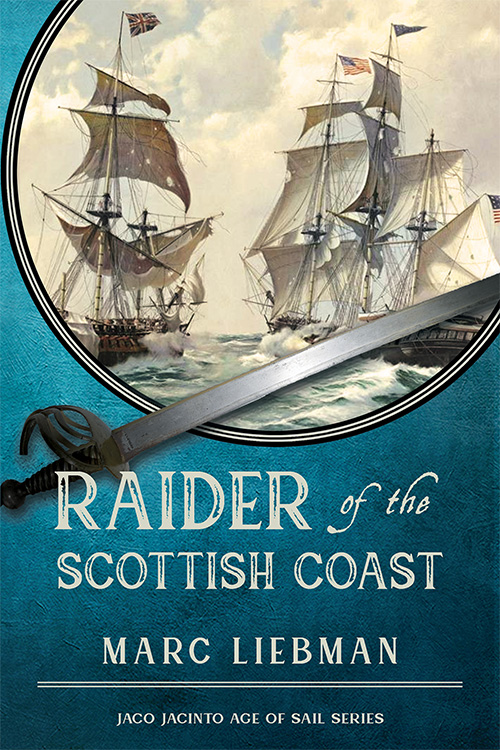 The Age of Sail began at the Battle of Lepanto in October 1571 when the Holy League’s fleet of sailing ships defeated a fleet of rowed galleys from the Ottoman Empire. Most naval historians agree that sailing warship design reached its peak during the Napoleonic Wars. The Age of Sail ended abruptly on March 9th, 1862 when the Confederate Navy ironclad Virginia dueled with the U.S. Navy’s iron plated Monitor. By the end of the American Civil War, steam powered, iron plated warships had begun replacing wooden sailing ships.

C.S. Forester (Horatio Hornblower), Patrick O’Brian (Jack Aubrey) and Alexander Kent (Richard Bolitho) are three of the most popular novelists who wrote Age of Sail novels. Each of their series focused on the fictitious exploits of Royal Navy officers. And, if you enjoy Age of Sail novels, this leads to the first of eight reasons why the Jaco Jacinto series is different…

One, the series focuses on the Continental Navy and the early days of the U.S. Navy. While much has been written about the U.S. Navy’s stellar performance during the War of 1812, there are few books about the trials and tribulations of its predecessor, the Continental Navy, the sea going force that took on the Royal Navy, the largest, most powerful and best trained and equipped navy in the world during the American Revolution. When the war for independence began, the Royal Navy had 355 sixth rated ships or larger and the Continental Navy hadn’t even been formed. After the American Revolution ended in 1783, the Continental Army and Navy were dissolved. The United States had no army or navy for nine years. Then, via the Naval Act of March 1794, the modern U.S. Navy was born.

Two, the main characters are an American and a Englishman. The series has two main characters. One is Jaco Jacinto, an American from Charleston, SC and the other is Darren Smythe, an Englishman from Gosport, U.K. In the first book – Raider of the Scottish Coast – they meet and become friends. Then, later in the novel, they are again mortal enemies. Throughout the series, the careers of Darren and Jaco intertwine. Depending on the global political situation, they either continue their friendship or find themselves at the opposite ends of each other’s cannon.

Three, each book is true to history and has historical tidbits one doesn’t find in most history books. Just as noted under reason one, each novel is chock full of interesting tidbits from the period that aren’t in most history books. For example, most don’t know that the first man to accurately chart and describe the Gulf Stream was none other than Benjamin Franklin.

Four, the battles, firearms and cannon described are accurate and realistic. The reader is given insight into 18th Century weapons and their limitations as well as the challenges of maneuvering a sailing ship into position when one only can fire to either side. Readers will enjoy captains basing their strategy on their visualization of the geometry of the coming engagement by determining how they will accommodate the wind and the limited fields of fire of their side mounted cannon.

Five, each novel takes on social issues of the era which are still relevant today. In each book, the characters encounter prejudices that still plague our society today. Life in the 18th Century was very different than the 21st Century. They lived without electricity, running water, telecommunications, computers, the internet, email, twitter, texts, GPS, supermarkets, modern medicine, cars, airplanes, trains and much more. The pace was a lot slower and long distance communication was via handwritten letters. Women weren’t allowed to attend medical or law school, much less vote.

Six, one doesn’t have to read them in sequence or even all of them. There’s enough backstories in each book so that you will understand what happened in prior novels. This well let you read one or all of them in any order you choose.

As of October, 2020, the Jaco Jacinto Age of Sail series will have at least four and maybe six books. The prospective titles and era they cover follows:

When asked, which one should I start with, my answer is always the same.  Pick one and dive in…  You’ll enjoy the sail, errr, read!

Who is Jaco Jacinto? Expand

Jaco was born and raised in Charleston South Carolina. His grandfather Caidin came to Charleston from the Netherlands in 1708 as an ambitious 18 year-old. Caidin had commissions from the British and Dutch East India Companies to find cargos for which he would be paid 20% of the value. At his death, Caidin left his two sons – Javier and Genuto - a thriving import/export business along with thousands of acres of land.

Salomon Jacinto and his family escaped from Malaga, Spain in 1588 after King Ferdinand and Queen Isabella issued the Alhambra Decrees which gave practicing Jews a choice, convert or die. Solomon was a blacksmith and trader brought his family to The Netherlands.

When the American Revolution began, Jaco is 16 and had spent the prior three summers on merchant ships as “an officer in training.” The ships carried indigo, lumber, rice and cotton to Lisbon, Amsterdam, Brest and London. He spoke fluent Spanish because his parents insisted he learn the language of their ancestors and French which he learned in school.

Physically, Jaco is slim, 5’ 9” tall with olive skin and thick, jet black hair that begets his Spanish Mediterranean heritage. His eyes are bright blue and can be soft and gentle, or fire laser like darts. He is naturally curious about the world around him and focuses on the task at hand. In battle, Jaco is a reputation as being shrewd, unpredictable tactician. As a leader, he cares deeply for the men he commands who will fight to the death for him.

Who is Darren Smythe? Expand

Ever since he was a little boy in Gosport, England, Darren wanted to be an officer in the Royal Navy. He’d spent countless hours watching ships come and go from the Portsmouth Naval Base across the harbor..

Darren’s f upper middle class family owns Smythe & Sons, a manufacturer of surgical instruments and medicines. The firm was started by Dr. Joakim Schmeitz, a graduate of the University of Heidelberg’s medical school and his wife Gretchen in the early 1600s. Both were Protestants and who fled Germany during the Reformation. The couple spent several years in The Netherlands before moving to England and Anglicizing their last name to Smythe.

Darren never wanted to go into the family business and his father secured him an appointment at the Royal Naval Academy. Upon graduation at 16, he was assigned as a midshipman on the frigate H.M.S. Deer, 32 guns.

Smythe looks English with fair skin and curly blond hair. He’s a slim, 5’9” tall, studious and patient. Darren is lucky enough as a midshipman and lieutenant to have captains who mentor him. Seeing their mangled bodies on the quarterdeck forever scarred his psyche and forced him to effectively lead men much older than he. His superiors see him as a future admiral. He sees a career in the Royal Navy as a way of proving himself outside the family business, and through prize money, making his own fortune.