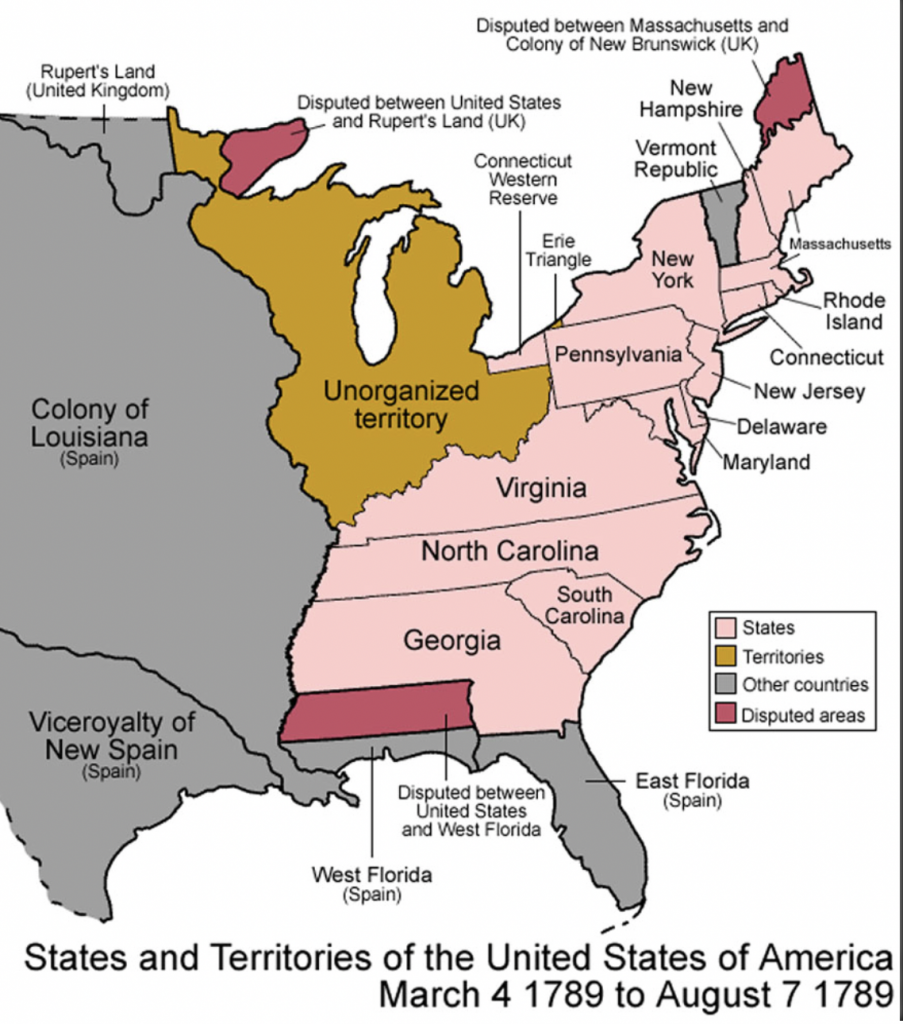 The Treaty of Paris that granted the Thirteen Colonies independence also set our country’s initial boundaries. The new United States encompassed all the British territory south of the Canadian border and west of the Atlantic coast to the Mississippi River. Our southern border was defined by Florida which was given back to Spain by the British.

While this looked good on paper, much of the territory of the new country was not explored except by the trappers who roamed the area. None one bothered to explain to the Native Americans that they were now U.S. citizens and that their land now belonged to the new United States of America.

Despite the treaty, the British kept forts manned by British soldiers inside our new national boundaries. This officially unofficial presence was a violation of the Treaty of Paris and the British finally pulled out after the War of 1812. But that is another story for another post and, to be frank, getting ahead of the story.

So, looking at the image accompanying this post, you can see the claimed boundaries of the Thirteen Colonies at the time the Treaty of Paris was signed in September 1783. Virginia, Georgia and North Carolina said all the land from their Atlantic Coasts to the Mississippi was theirs. Connecticut wanted a piece of what is now Ohio and Massachusetts claimed most of present-day Maine.

When the American Revolution ended, the country was governed by the Articles of Confederation which really was a loose alliance of the Thirteen Colonies. Under the articles, there was no central entity that could manage, read control, westward expansion.

Even before the Constitution was ratified in 1787, the map, or at least the boundaries of the states began to change. In 1785, Massachusetts ceded its claims to parts of what is now Michigan and Wisconsin. Connecticut did the same in 1786 when it gave up claims to what is now northern Pennsylvania, northern Illinois, Indiana and Ohio. South Carolina gave up its strip of land from its western border to the Mississippi in 1787.

Article IV, Section 3 of the U.S. Constitution established a process through which a territory could become a state. On March 4th, 1791, Vermont became the 14th state. Virginia gave up land that became Kentucky to join as our 15th state on June 1, 1791. Tennessee was carved out of land claimed by North Carolina and became the 15th state on June 1st, 1796.

The Louisiana Purchase was signed on April 30th, 1803 and virtually doubled the land mass of the U.S. By the time Lewis and Clark set off on their grand adventure of exploration on August 31st, 1805, Ohio was admitted as the 17th state on March 1st, 1803.

There would be a hiatus of almost nine years before another state, this time Louisiana was admitted as our 18th state in the middle of the War of 1812 on April 30th, 1812. This helped set the stage for the British attack on New Orleans. Why? In the Treaty of Paris, we granted England free access to the Mississippi River and the British were afraid the U.S. would not allow them to use the river.