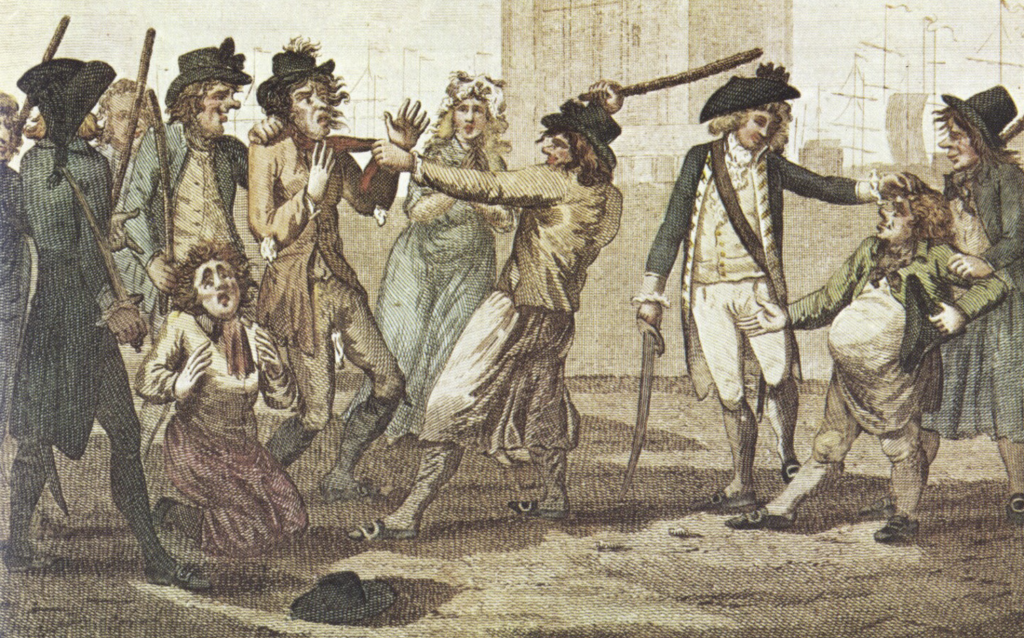 In today’s world of volunteer armies, it is hard to imagine seeing a “press gang” roaming the streets of an American or English city taking men into the navy. From the mid-16th Century to the end of the Napoleonic Wars, press gangs were used by the Royal Navy to help man its ships. Merriam Webster defines impressment as “the act of seizing for public use or of impressing into public service.

England has always had a manpower disadvantage compared to the European power such as its traditional enemy, France. For example, in 1800, England’s population was about 7.7 million. Across the channel, in the same year, England faced 30 million Frenchmen.

In the late 18th and early 19th Century, there wasn’t a national data base sitting on a computer from which one could download a list of military age men and send them a draft notice. Kings and dukes would send detachments of soldiers led by an officer into villages to encourage men to enlist. Should this fail, then any male between the age of 18 and 50 could be “drafted” into the army or the navy. If enough didn’t volunteer to serve king and country, they were taken into military service at gun or bayonet point.

To sail these ships, the Royal Navy needed men, lots of them. Desertion, often exceeding 25% annually, compounded its manning problem. One solution was emptying its jails, but this didn’t provide enough men.

With the support of parliament, the First Sea Lord “encouraged” Royal Navy captains to stop ships flying under any flag and search them for “English” citizens. How English citizenship was determined was left up to the individual Royal Navy captain.

One’s ability to speak English was the usual criteria so American merchant ships were viewed as “good” sources of trained seamen. The practice began in the 1790s but during Jefferson’s administration, it had become a major issue. U.S. ships were being stopped and as much a quarter of the crew was “impressed.”

Some members of Parliament thought the practice was a violation of the English Constitution. However, with the country in a protracted war against Napoleon, the English government turned a blind eye.

The U.S. steadfastly tried to remain neutral and trade with both England and France. Both navies seized American ships on the pretext that they were carrying contraband to the enemy. Having drastically scaled back the U.S. Navy, Jefferson had few options (see 1/23/22 post Jefferson Takes a Budget Axe to the U.S. Navy – https://marcliebman.com/jefferson-takes-a-budget-axe-to-the-new-u-s-navy/ and 1/30/22 post – Jefferson’s Complicated Relationship With the U.S. Navy – https://marcliebman.com/jeffersons-complicated-relationship-with-the-u-s-navy/ ). When Jefferson left office, the U.S. Navy was not a force that could take on the French Navy, much less the Royal Navy.

By 1812, Royal Navy impressment of U.S. merchant seamen had grown from a nuisance to a crisis. Despite Madison’s and Jefferson’s attempts to negotiate an end to impressment and the seizure of U.S. flagged vessels, the British refused. Along with other British provocations, i.e. stirring native American tribes in the Northwest Territories against the U.S. and attempts to restrict U.S. trade with countries at war with England, President Madison was left with few options. On June 1st, 1812, Congress declared war on Great Britain.

Posted in Blog, Geopolitics and tagged Impressment is kidnapping