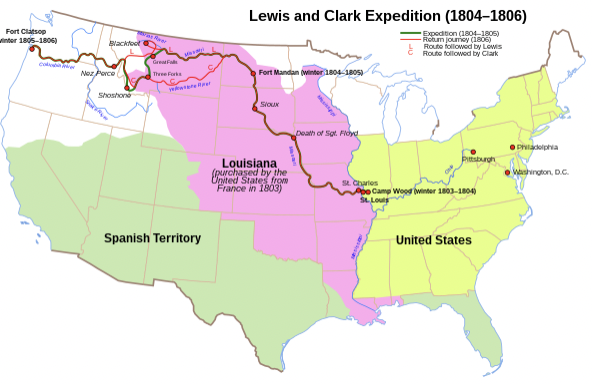 When Captain Meriwether Lewis and Lieutenant William Clark set out St. Louis on May 14th, 1803, it was hardly a corps in a military sense. Lewis had 40 men, including himself, and a dog named Seaman in his command.

Despite the country’s legal claim to the land of the Louisiana Purchase, President Jefferson was afraid that France, Spain, and Great Britain would ignore the boundaries and expand their presence in what was now U.S. territory. His fears were well founded.

Napoleon was glad to rid his country of the land, but Spain, which had ceded what we know as the Louisiana Purchase to France, was still very interested. If you look at the accompanying map, Spain still laid claim to much of the Arizona, California, Colorado, Kansas, Nevada, New Mexico, and Texas.

When the Spanish learned of the Lewis and Clark’s expedition, they sent Pedro Vidal and 51 – a mix of soldiers, local settlers, and Pueblo Indians – to arrest the members of the Corps of Discovery. Spain’s rationale was that the Americans were trespassing Spanish Territory. Vidal and his men left Santa Fe on August 1st, 1804, when they passed about 100 miles behind the Lewis and Clark, they were well into the territory owned by the United States.

Pedro Vidal was born in Lyon, France and came to San Antonio, the capital of New Spain, in 1784. He lived amongst the Wichita Indians on the Red River, near Wichita Falls, TX which is on the border between Texas and Oklahoma. In 1787, he led a small group from San Antonio to Santa Fe becoming the first European to do so. Vidal’s career as an explorer and diplomat would make a great book.

Nonetheless, the Spanish leaders in San Antonio were suspicious of the Frenchman in their midst and arrested him. He was later freed by his Comanche friends. Ultimately, in 1803 he was pardoned and was living in Santa Fe when he was given the task of finding and arresting Lewis and Clark.

Having failed to find the Corps of Discovery in October 1805, he was again sent, this time with a larger force of 100 men with the same tasking. He reached the area near Las Animas, CO when his force was attacked by several hundred Native Americans and was forced to return to Santa Fe, again without finding Lewis and Clark.

In June 1806, the Spanish ordered a third expedition to arrest the Americans, this time under Lieutenant Facundo Melgares. He set out with 600 men – 105 Spanish soldiers, 400 militia men from the New Mexico militia and 100 Native Americans.

One of Melgares tasks was to negotiate a treaty with the Pawnee to block Lewis and Clark’s return to St. Louis. Another task was to set up a fort to enable Spanish soldiers to prevent the Americans from settling on the Red River. His expedition reached Nebraska before turning back and without negotiating a treaty.

Why is all this important? Simple. No one in Europe or the United States had accurately mapped the Louisiana Territory. The basis of the earlier British, French and Spanish claims were based on in accurate maps from the few Europeans who ventured into what is now the Western U.S.

It would take the five more treaties – (1) Texas Annexation in 1846; (2) 1846 Oregon Treaty; (3) Mexican Cessation after the Mexican American War in 1848; (4) Spanish Cessation of 1853; and (5) 1853 Gadsden Purchase – before the land we know as the continental United States was complete. And it would be well into the 20th Century until effort to map and explore the Western U.S. started by Lewis and Clark was completed.

Map by Gonzei, courtesy of Wikipedia.

Posted in Blog, Geopolitics and tagged Spain tried to stop Lewis and Clark