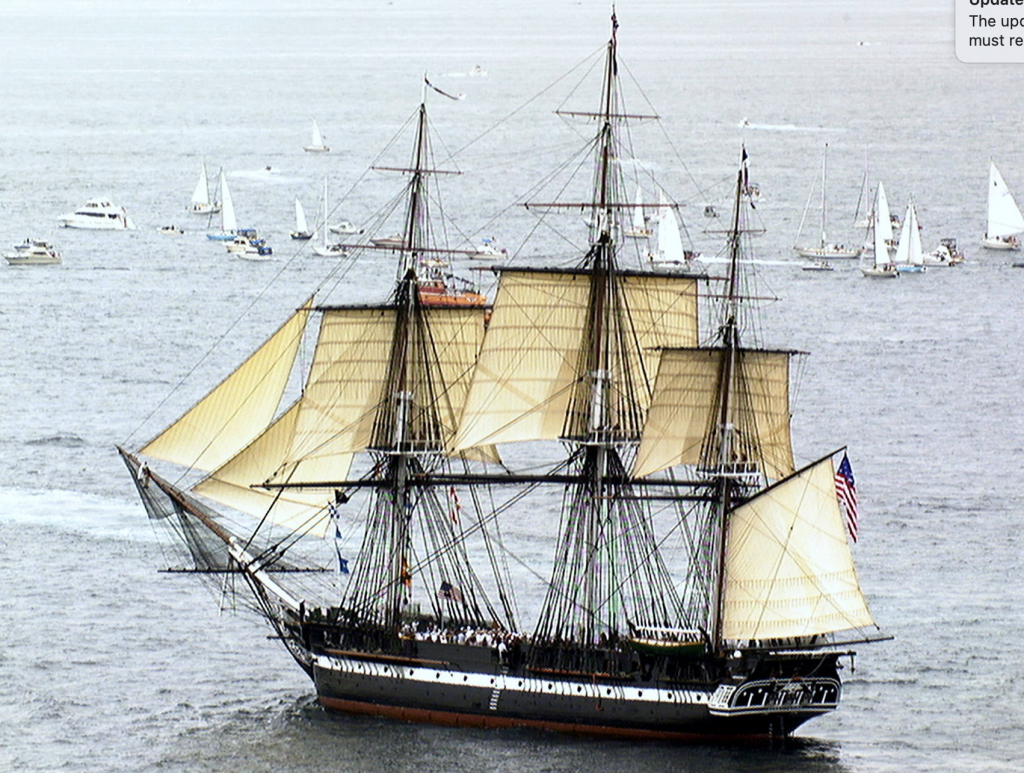 In the winter of 1794, war in Europe raged. The first of the French Revolutionary Wars – the War of the First Coalition – was approaching the two-year mark. In the Caribbean and the Atlantic, U.S. merchant ships were being seized by French and British privateers as well as the navies of the major combatants – France, England, Spain, etc. Those U.S. merchant ships that ventured in the Mediterranean risked being taken by the Barbary Pirates.

For 12 years, U.S. flagged merchant ships were unprotected because the Continental Navy had been effectively disbanded when Alliance – its last frigate – was sold in August 1785. American merchant ship owners were paying the price of not having a Navy because privateers, pirates and other Navies could prey on our ships without risk.

To those who familiar with American history, the debate in Congress in the winter of 1794 was a familiar one. Discussion centered around three key points. One, the United States has enough natural resources and an energetic population so we can continue to grow our economy without trading overseas. Those who favored this isolationist philosophy pointed to the tribute being paid to the Barbary States which, by 1800, amounted to 30% of the Federal budget and to the potential cost of a standing Navy.

Argument two was the U.S. should not take sides in any European conflict. Those who supported this position pointed to George Washington’s April 22nd, 1793 Proclamation of Neutrality that stated “the duty and interest of the United States require that they should with sincerity and good faith adopt and pursue a conduct friendly and impartial policy toward the belligerent powers.”

This argument was further buttressed by the passage of the Neutrality Act of 1794 which made it a crime for U.S. citizens to “set on foot or provide or prepare the means for any military expedition or enterprise … against the territory or dominions of any foreign prince or state of whom the United States was at peace that person would be guilty of a misdemeanor.”

As it happened later in our history, world events conspired against the isolationists. Late in 1793, the Barbary Pirates seized the merchant ships Thomas, Hope, Dispatch, George, Olive Branch, Jane, President, Polly, and Minerva and were holding their crews for ransom. England was now blocking exports to its enemies and preventing imports to the U.S. from the Caribbean. The Jay Treaty, which would change England’s policy was not yet negotiated and wouldn’t be signed until November 19th, 1784.

Congress was forced to act. By a vote of 46 to 44, the House of Representatives passed the Act to Provide a Naval Armament (a.k.a. the Naval Act) of 1794 on March 27th, 1794. The bill authorized the establishment of a Navy and the procurement of “six frigates, four of 44 guns, two of 36 guns by purchase or otherwise.” Those ships, collectively known as ‘The Six Frigates’ were named, Chesapeake, Constitution, Constellation, Congress, President, and United States.

As it has so often has happened in our history, the Congress did not authorize all the funds necessary to build these ships and interfered with their construction. To placate (and gain votes to support the funding bills), the ships were built in six different shipyards in six different cities. Thankfully, four used the same basic design penned by Joshua Humphreys. United States was the first to be commissioned on July 11th, 1797, three plus years after the Naval Act was passed. President wasn’t launched until April 10th, 1800!