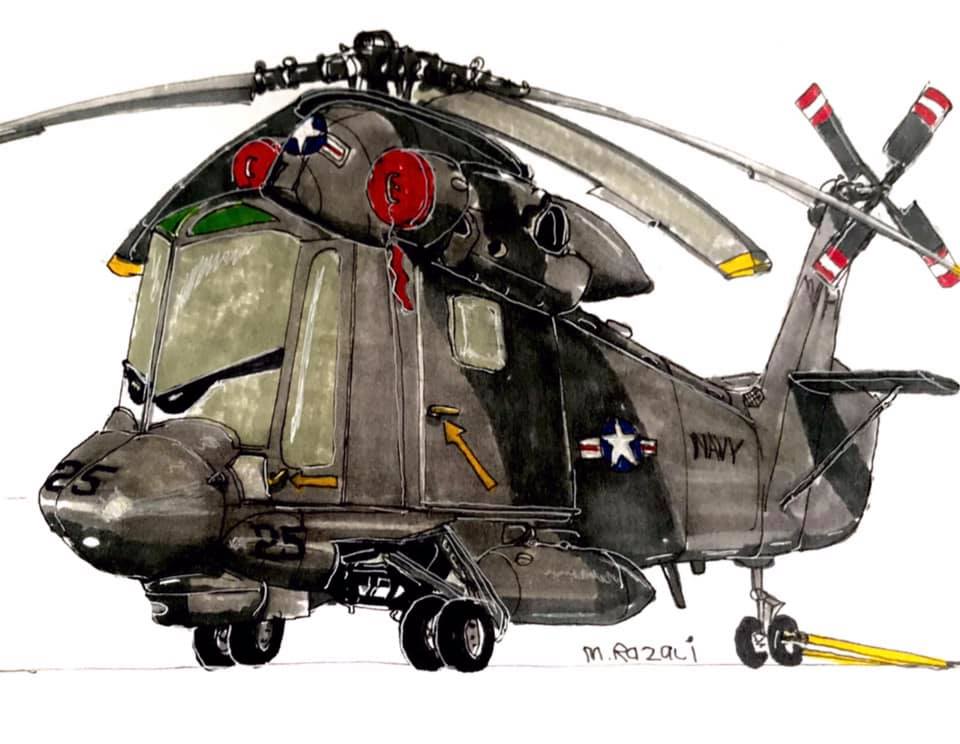 The Navy installed what was known as a “Gold Stripe” engine that had an extra 250 horsepower in a few A/B’s flown by HC-7. This alleviated some of the power, or lack of power problem a bit, but the hot and humid conditions found in South East Asia dictated a better solution which was found in twin engine C and D models.

Both the UH-2A/B and the C/D airframes were almost identical. The big difference was the C’s and D’s had two GE T-58 engines rather the one in the A/B. Rather than redesign the transmission, Kaman Aircraft came up with the idea that the output shafts from the T-58s would go aft into a “combining gearbox” out of which came a third shaft to the main transmission. So, there were a lot of shafts and bearings that needed greasing under the cowlings. See later story about molybdenum disulfide grease.

On the UH-2C, Kaman kept the three bladed tail rotor from the A/B and it wasn’t powerful enough to compensate from the additional power available. If you pulled a lot of power, you would do two things that were bad if one was not very, very careful. First, you could run out of tail rotor authority and the helicopter would rotate uncontrollably to the right. Ham handed increases in power could also over torque the combining gearbox and/or the transmission which would at the very least, shorten their lifespan or worse, cause either one to fail. The severe limits on the amount of torque that could be applied to the transmission and the power of the tail rotor to offset torque limited the crew’s ability to fly the helicopter anywhere near its true performance limits.

With two engines, the UH-2C now had twice as much power as the UH-2A with the same rotor system. We used to say that in the A/B one barely had enough power to turn the rotor blades. In the UH-2C, since Kaman didn’t upgrade the transmission we now had enough power to unscrew the rotor blades. Finally, in the HH-2C and D models, the transmission was upgraded and a fourth blade was added to the tail rotor. Now one could safely use all the extra power from the second engine.

The difference between the HH-2C and the HH-2D was that the C had armored seats, some armor plate, mounts for M-60 machine guns and self-sealing fuel tanks. None of that was installed in the D although supposedly, there were fly-away kits someplace in the inventory that would allow a detachment to install the components.

To add fuel capacity, the H-2Cs and Ds now carried external fuel tanks on either side of the fuselage that could be dropped in an emergency. With full fuel of 2,400 pounds (353 gallons), you had about two and a half hours of fuel and didn’t have to worry about having enough power to hover.

To get into the H-2, one climbed into the cockpit via a sliding door on either side of the fuselage. Except for the additional column of instruments for the second engine and two engine speed selectors on the left side of the center console, the instrument panels were the same for the A/B/C and D.

Flying the H-2C and D was a joy. For a helicopter, it was fast and could reach 120 – 130 knots (if the blades were in trim) thanks to lots of power and its streamlined shape. The helicopter was small and easy to land on the smallest flight deck and very maneuverable. An H-2 could out turn any other helicopter I flew. In fact, in the D, you could roll it into 80 to 90 degrees of bank and pull two gs and maintain altitude for at least one full turn. One had to watch your rotor rpm because the increased gs would cause the main rotors to speed up and you didn’t want to risk having them come off!!! I often practiced erratic (some might say all my flying was erratic!!!) left and right climbing and descending turns as a way of preparing to throw off the aim of anyone who might want to shoot at me.

Another fun thing to do in the H-2 was quick stops. In these, you went from a fast cruise, i.e. 90 knots or faster and pulled the nose up to about 45 degrees or more above the horizon while at the same time lowering the collective to maintain altitude. The idea was to slow the helicopter as fast as possible and maintain altitude. The maneuver ended with either the helicopter in a hover or at a slow speed, i.e. 10 to 20 knots. There were variations in which we used the rudders to do a pedal turn toward the end of the flare to turn the helicopter 90 or even 180 degrees from the original heading.

Of all the Navy helicopters I have flown – the TH-57A (the Navy’s primary helicopter trainer version of the Bell Jet Ranger), UH-1D, H-2 and H-3 series – the D model H-2 was the easiest to fly and hover even without the auto stabilization equipment or ASE working. The helicopter had plenty of excess power and tail rotor control. Hydraulic boost made the H-2 easier to control but the helicopter was flyable, albeit one needed a strong arms to fly an H-2 boost off. As an instrument platform, the H-2 was stable and the gauges large and easy to scan. In short, the H-2 was like a flying a sports car. It was fun!

Even though the pilots “wore” the H-2, there was plenty of room in the cockpit and the seats were comfortable for long missions. I’ve flown one for eight hours straight.  The cabin of the H-2was another story because it was pretty cramped. There wasn’t room to stand up and with two air crewmen on board and all the gear we carried, the cabin was crowded. Add a couple of passengers and the cabin was a packed house. There were canvas troop seats for four, but I’ve had seven or eight sitting on the floor in the cabin.

The H-2’s doors didn’t seal well so the inside was drafty. The heater pumped out a lot of heat from the center console so depending on in which seat you were sitting, your right or left side was toasty warm and the other side was cold.

And, then there were the blade flaps. The H-2 had small flaps out near the tip of each of the main rotor blades. They looked like an aileron that was added as an afterthought. Control inputs from the cyclic stick or the collective moved the flaps and helped change the pitch of the blades. One of the benefits was the flaps reduced the amount of hydraulic power needed to control the rotor blades. They worked great as long as they were in “trim.”

The blade flaps on two of the blades could be trimmed using electric motors and but they were, at times, very difficult to keep aligned. If they were out of trim, the H-2 had a vibration known as a “one per rev” that could range from mild to very uncomfortable. From the cockpit, you could see when all four main rotor blades were in trim. When one wasn’t, the blade “flew” outside the track line. Figuring out which blade was out of track was a challenge.

The avionics compartment was in the nose and access was through clam shell doors that were split vertically. I’m sure the designers thought that clam shell doors provided better access to the black boxes that controlled the helicopters navigation and communications equipment, the automatic stabilization equipment (ASE) and the blade trim system. Even though there were rubber seals on the doors, they leaked. Water in the avionics compartment is not a nice thing particularly if you are flying on instruments.

Other maintenance headaches were keeping the tail rotors greased and corrosion. The castings for the transmission, combining gear box and others were made from an aluminum magnesium alloy. The good news was that they were light and strong. The bad news was that they were very susceptible to corrosion from the salt air. And, god forbid, if they overheated and caught on fire, it was a race between how fast you could land ditch the helicopter and how fast the fire caused the helicopter to disintegrate. If a magnesium allow begins to burn, one has two choices – suffocate the flames with sand or submerge burning item in water – and neither of them is a practical solution in a flying machine! So, a fire in the engine compartment in an H-2 was a really serious matter because one had to land or ditch the H-2 immediately if one couldn’t get the fire out.

The dynamic system of each model of the H-2 needed frequent greasing and the tail rotor was the most sensitive of them all. Every 10 hours, we were supposed to shut the main rotors down and grease the bearings on the tail and main rotor. if we didn’t, sometime around hour 12 the vibrations would start and would continue to get worse until the bearings were greased or worse, failed.

An attempt was made to create an armed called the HH-2C with a mini-gun that hung in a nose turret. The system had all sorts of problems, was heavy and the ammo tray took up a large portion of the already small cabin. Ultimately, the turrets were all removed. 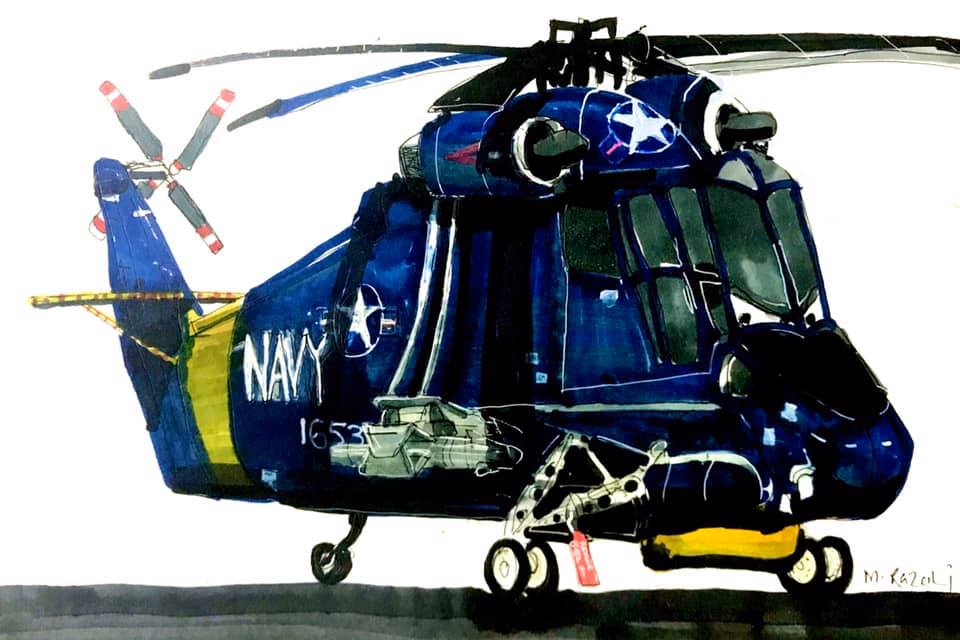