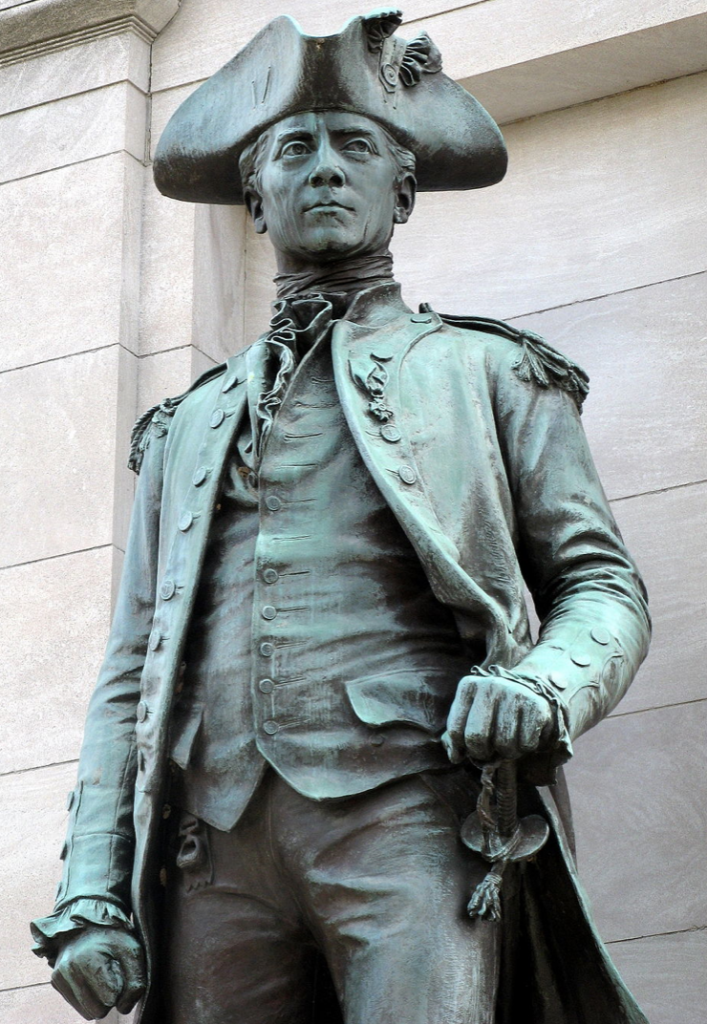 John Paul Jones (JPJ) is one of the most storied naval officers of the 18th Century. He uttered the words “I have not yet begun to fight” in the battle in which his ship, Bonnehomme Richard outfought the Royal Navy’s Serapis on September 23rd, 1779.

Jones was also captain of Ranger when the frigate captured H.M.S. Drake on April 24th, 1777. Under his command, Ranger raided the Scottish town of Whitehaven which was a wake-up call to the British who realized that the rebels were not afraid to bring the war to English soil.

The often overused phrase “in harm’s way,” was written by JPJ in November 1778. Jones wrote the words in a letter to a friend in the French Government. JPJ was expressing his frustration because the French were slow in giving him a ship to command. The exact words are, “I wish to have no connection with a ship that does not sail fast; for I intend to go in harm’s way.” A few months later, he took Bonnehomme Richard to sea and the rest is history.

There is much more about JPJ that most don’t know. Here are just five:

Number 1. Before he joined the Continental Navy, Jones was accused of murder twice. The first was when he was master (and captain) of the merchant ship John, he had a man accused of mutiny flogged in 1770. The man later died from yellow fever but his wealthy family wanted Jones tried for murder.

The second time was when he was commander of the armed merchant ship Betsy. A dispute over pay with a crewmember by the name of Blackton became ugly and the men began fighting with swords. Blackton died and his family wanted Jones tried in an Admiralty Court in Scotland where they had influence. Although exonerated, fearing for his life, Jones fled to Fredricksburg, VA in 1774 leaving a considerable fortune behind.

Number 2. Why did Jones flee to Fredricksburg? His older brother settled there and had a plantation. When Jones arrived, his brother was dead and Jones sold the plantation. With an arrest warrant out from the Blackton affair, John Paul changed his name to John Paul Jones and moved to Philadelphia in 1775 where he offered his services to the Continental Congress.

Number 3. Fast forward to 1780. Jones is without a command and the Continental Congress is building America, a 74 gun ship of the line. Jones is assigned to supervise the final phases of its construction and then take ship of the line to sea. The Continental Congress decides to give America to the French to replace Magnifique which ran aground in Boston harbor leaving Jones without a command.

Number 4. The American Revolution ends and the Continental Congress dissolves the Continental Navy. Jones, while not broke, does not have an income. Catherine the Great of Russia offers him a commission and he serves from1787 – 1792. Jones retires from the Russian Navy and is living in Paris when in June 1792, he is appointed the U.S. Consul to Algiers, one of the Barbary states. Unfortunately, Jones dies of kidney failure and is buried in Paris.

Number five. In 1905, after years of searching, JPJ’s mummified remains are found in Paris and President Theodore Roosevelt asks the French government to allow the U.S. to bring Jones’ remains to the U.S. Today, they are enshrined in a tomb at the U.S. Naval Academy.