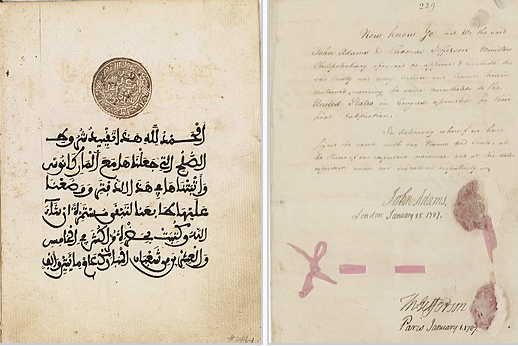 It is one thing for a geographic entity to declare independence as a country, but another to be recognized. For the new United States of America, diplomatic recognition came from unusual places.

During the late 18th Century. France, England, Spain and Russia were the tier 1 powers. Sweden, the Netherlands, Denmark (which controlled modern Norway), the Holy Roman Empire made up the next tier down. Germany and Italy wouldn’t unite until 1870 and were, at the time of the American Revolution a mishmash of dukedoms, duchies, and principalities, e.g. Kingdom of Prussia, Grand Duchy of Hesse, Kingdom of Sicily, Republic of San Marco, etc.

The first country that recognized the United States as a sovereign entity was the Kingdom of Morocco. Sultan Mohammed III was rebuilding his country and opened his ports to merchant ships flying the Continental flag in December 1777. The actual Treaty of Peace and Friendship wasn’t signed until June 1786 which, if you go by treaty dates, makes Morocco the eighth country to recognize the United States as a country.

Being recognized by a major power is another big step forward. France, via the Treaty of Alliance signed on February 6th, 1778, became the first 18th Century global power to recognize the nascent U.S.

Next was the Republic of Venice in early 1782. Desperate and for trade and a nation in decline, the Venetians welcomed a relationship with the new country. The Venetians were followed by the Dutch who officially recognized the United States of America on April 19th, 1782. Keep in mind, The Netherlands were early supporters of the American Revolution and provide money, arms and ports in the Caribbean to Continental ships. In many ways, the new United States was following the lead of the Republic of the Seven United Netherlands which declared their independence from the Holy Roman Empire in 1588.

Spain followed France’s lead on February 20th, 1783. Sweden, which at the time, controlled the Baltic, officially recognized the United States of America on April 3rd, 1783 even though the treaty was completed in February of the same year and kept secret until peace negotiations between the U.S. and England had begun.

By signing the Treaty of Paris, September 3rd, 1783, England became the seventh country to recognize the U.S. as “free, sovereign, and independent states, and that the British Crown and all heirs and successors relinquish claims to the Government, property, and territorial rights of the same, and every part thereof, …” King George III’s signature on the treaty also meant that the German principality of Brunswick-Lüneberg also recognized the U.S. because he was also the Duke and ruler of the small country.

Before the end of 1783, the Republic of Ragusa on the Dalmatian Coast (modern Croatia) recognized us as a country. The Papal States, an S-shaped country in the middle of the Italian boot that ran from Rome to Ravenna, signed a treaty with the U.S. on December 14th, 1784.

Prussia recognized the U.S. on September 18th, 1785 followed by the Free Hanseatic State of Hamburg on June 19th, 1780 which was the 10th country to recognize the new country.

All this happened by the time the next major upheaval in the world – the French Revolution – began in May 1789. By the end of the 18th Century, our republic was recognized by 21 countries. Not a bad start at time when the prevailing wisdom is that to be successful as a country, one had to be ruled by royalty.

Image – Signature page of the Moroccan/U.S. treaty courtesy of Wikipedia.

Posted in American Revolution, Blog, Geopolitics and tagged Before the French Revolution the new U.S. was on its way to being recognized all over the world