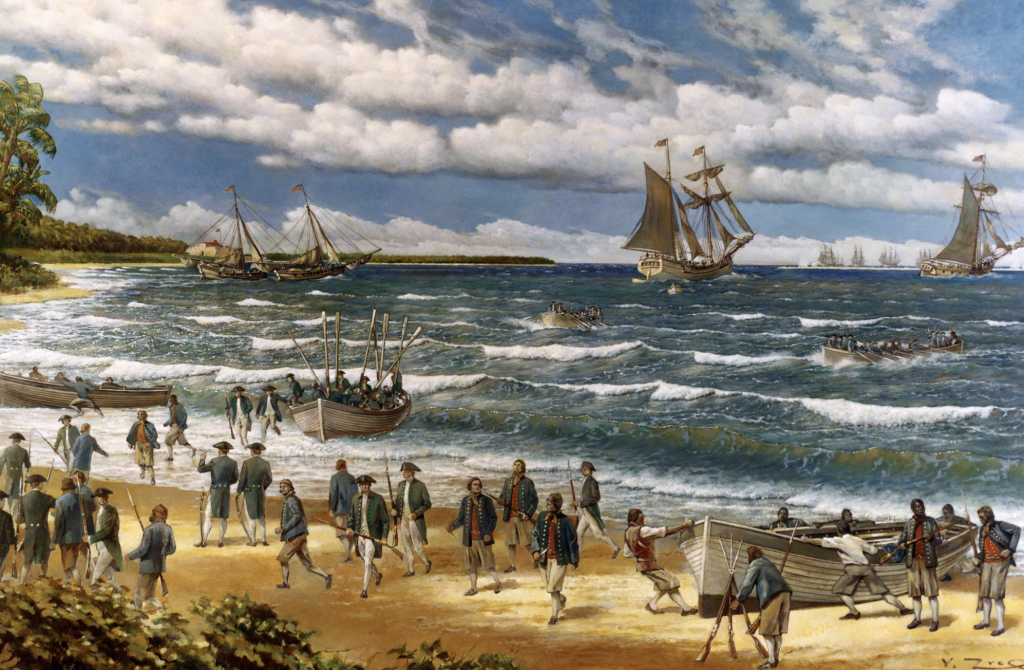 Marine Corps history officially started on November 10th, 1775 when the Continental Congress authorized the formation of two battalions of Marines. Eighteen days later, Samuel Nicholas was commissioned as its first officer (and first Marine) given the rank of captain, thus making him the first commandant of the U.S. Marine Corps.

Congress authorized “one colonel, two majors, and other officers, as usual in other regiments; that they consist of an equal number of Privates with other battalions; that particular care be taken that no persons be appointed to offices, or enlisted into said battalions, but such as are good seamen, or so acquainted with maritime affairs as to be able to serve by sea when required; that they be enlisted and commissioned to serve for and during the present war with Great Britain and the Colonies, unless dismissed by order of Congress; that they be distinguished by the names of the First and Second Battalion of Marines.”

Nicholas set about recruiting Marines and then set sail on U.S.S. Alfred, 30 guns as head of the frigate’s Marine detachment. Alfred’s First Lieutenant was John Paul Jones and its captain was Dudley Saltonstall. Esek Hopkins, the commodore of the five-ship task force flew his flag on Alfred. When the ships left Philadelphia in February 1776, Alfred was accompanied by the frigate Columbus, 28 guns; the brigs Cabot, 14 guns and Andrea Doria, 12 guns; and the sloop Providence, 12 guns.

Their mission was to take the two forts guarding Nassau in the Bahamas where intelligence suggested there was a large stock of gunpowder and shot, something the Continental Army and Navy desperately needed. On arrival, Jones urged Hopkins to blockade the port to ensure that the British do not move the munitions. Instead, Hopkins decided to anchor off the island of Abaco, leaving Nassau unguarded.

Two hundred Marines and 50 sailors led by Nicholas and Hopkins landed on New Providence Island, north of the town of Nassau on March 3rd, 1776. This is the first assault on “enemy” territory made by the United States Marines.

The small British Army garrison stayed in its two forts – Montagu and Nassau – and Montfort Browne, the Royal Governor, sent British Army Lieutenant Burke to meet with Hopkins and Nicholas who demanded that the town and the forts surrender. Burke agreed as he was authorized to do but asked for 24 hours.

Hopkins, who owed his command more to the fact that his brother was the chairman of the Continental Congress’ Marine Committee than to his experience as a ship captain, steadfastedly refused to heed John Paul Jones’ (and other officers’) advice to keep the port of Nassau under surveillance. That night, most of the gunpowder and ammunition was loaded on two ships – Mississippi Packet and H.M.S. St. John. By dawn, both ships were well on their way to British held St. Augustine.

Governor Browne dutifully surrendered the town and the forts to Captain Nicholas and Commodore Hopkins on March 4th. Even though most of the powder and shot was gone, there was enough left to call the raid a success.

Nonetheless, privateer and some Continental Navy captains managed to get to sea and during the course of the war, captured about 12% of the British merchant fleet.

Nicholas died in 1790 from yellow fever. Three U.S. Navy ships have been named in his honor and at dawn, every November 10th, a detachment of U.S. Marines lays a wreath on Major Samuel Nicholas’s grave in the Arch Street Friends Meeting graveyard in Philadelphia.

Image is the 1973 painting by V. Zveg of the March 3rd, 1776 landing by Continental sailors and Marines landing on New Providence Island, Bahamas.

Posted in Blog, Navy and tagged Marines make their first landing in their illustrious history