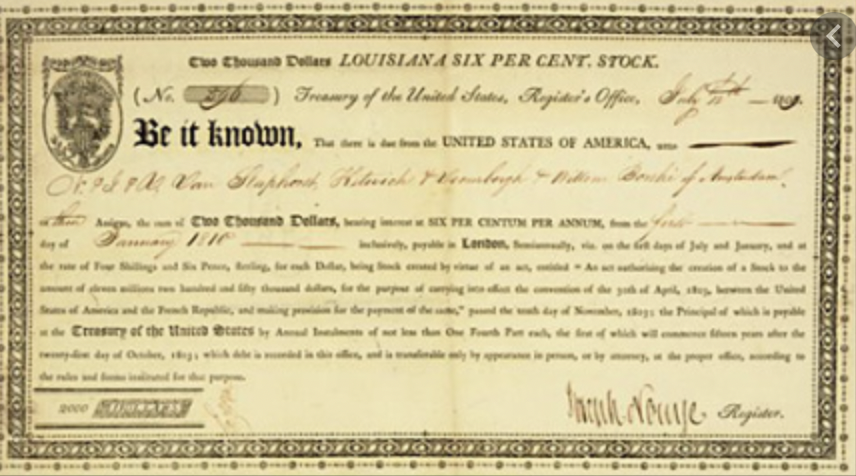 The new United States of America had a Mississippi River problem because in the 1783 Treaty of Paris, Britain was guaranteed access to the river that ran down the middle of the North American land mass. The treaty that ended the American Revolution gave the U.S. the land east of the Mississippi, not both sides of the river. Through New Orleans, the French controlled the entrance to the land west of the Big Muddy and could prevent any ship from going up the river.

France, now led by Napoleon, had a North American problem. To him, maintaining a large portion of North America seemed impossible given the French loss of Canada to the British during the Seven Years War. His focus was on England and Europe and believed he could not defend a large portion of the North American continent. However, to prevent the British from capturing New Orleans, he sent more troops to defend the city that controlled the entrance to the Mississippi.

That didn’t play well in Washington. President Madison’s representative in France was already discussing buying the land around the mouth of the Mississippi. Discussions led by Robert Livingston were progressing slower than Madison wanted so James Monroe, his Secretary of State, was dispatched to speed the talks along before Napoleon changed his mind.

Shortly before Monroe arrived in Paris, Napoleon’s representative in the talks – François Barbé-Marbois – offered to sell the whole Louisiana Territory to the U.S. All 880,000 square miles for $15,000,000 or roughly $.65/acre.

Undaunted, the Americans quickly agreed to the price and set about finding the financing. Monroe and Livingston were faced with two immediate problems. One, they were only authorized to commit to up to $10,000,000. Two, the U.S. government didn’t have the money.

The pair turned to an unlikely source, a British merchant bank named Barings. Founded in 1762 by German born British wool merchant, Francis Baring, the firm already had worked with man American merchants before and after the American Revolution.

As an aside, this is the same Barings Bank that in 1995 Nick Leeson stuck with £887 million in losses from fraudulent investments and bad commodity trading decisions. Forced to close after 233 years in business. the Dutch firm ING bought the bank that same year for £1.

Back to funding the Louisiana Purchase. What emerged was a series of financial transactions based on the exchange rate of 5.3 French francs to each U.S. dollar. First, the United States government assumed $3.75 million debts owed to American citizens by the French government, companies and individual Frenchmen.

The balance of $11.25 million was funded by issuing U.S. bonds with an interest rate of six per cent and semi-annual payments of $337,500/year. The bonds would amortize over 15 years.

Napoleon needed money to pay for his wars and in steps Francis Barings who sensed an opportunity. He and Barings Bank purchased of all the bonds at a 12.5% discount. Barings paid $.875/dollar of value and agreed to pay the French $1,132,208 within 30 days and $377,358 a month until the balance was paid off. So, Napoleon got his cash and now, Barings Bank held $11.25 million in U.S. bonds that would generate six per cent interest on the principal for which he paid only $9.843,375.

Barings sold all the bonds to investors in London and Amsterdam. Barings made a healthy 12.5% gross profit from the transaction. In the end, Napoleon received far less than his asking price of $15 million because $3.75 of the deal was really debt forgiveness. Apply the 12.5% discount Napoleon gave Barings for the $11.25 million, and Napoleon only received about $9.84 million in cash for the Louisiana Territory.