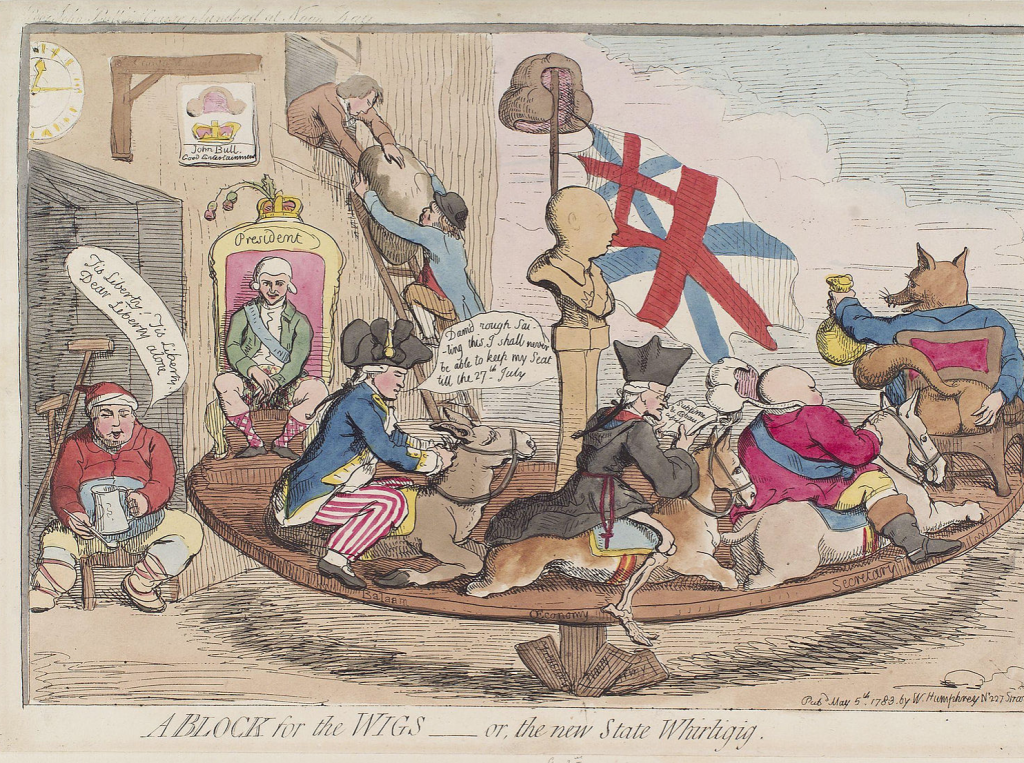 Cornwallis’ surrender at Yorktown on October 19th, 1781 was the second shockwave that rattled the British political and military establishment in the fall of 1781. The first occurred on September 5th, 1781 off the mouth of Chesapeake Bay when the Royal Navy while not defeated, was forced away from rescuing Cornwallis by the French Navy.

The British parliament didn’t learn of Cornwallis’ defeat until November 1781. In the late 18th Century, there was no internet, email, or telephones. Communication was by letters that had to be sent across the Atlantic. A fast trip from New York to London took three weeks. Westbound voyages often took four or more.

When the bad news arrived, Parliament about to debate how much would be spent prosecuting a war that was not going well. In a cabinet meeting, Lord North supposedly exclaimed when he heard the news about Cornwallis, “Oh my God, it’s over!!!” Well, not exactly.

Lord North’s government changed the British strategy. No longer would there be campaigns away from well defended bases a la the ones that ended in defeat at Saratoga and Yorktown. The focus was holding onto what they had, i.e. Charleston, New York and Savannah.

In January, the British learned that the French had captured two more islands in the Caribbean and a third was hanging on by a thread. In the Mediterranean, Menorca had fallen to the French and Spanish. Graves defeat off the coast of Virginia and the losses in the Caribbean caused Parliament to demand an inquiry of the “administration of the Royal Navy.” The First Lord of the Admiralty, the 18th Century equivalent of the current U.S. Secretary of the Navy, Lord Sandwich narrowly escaped dismissal on a vote on February 20th, 1782.

The Colonial Secretary, Lord Germain was not so lucky. He was replaced by a very hawkish, pro-war, Welbore Ellis.

In Parliament, Lord North was facing an anti-war faction led by Charles Watson-Wentworth, the Marquess of Rockingham (Lord Rockingham) and William Petty Fitzmaurice, Earl of Shelburne (Lord Shelburne). Neither had the votes to force North out of power. Hence, the worldwide fighting continued including in the Thirteen Colonies.

The first nail in the coffin of Lord North’s ministry was the vote in Parliament on February 27th, 1782 for no more war in America. The motion passed by 19 votes. The majority in Parliament felt that continuing to fight would weaken England’s ability to defend itself from its traditional enemies on the continent.

Sensing victory, Lords Rockingham and Shelburne attempted to win a “vote of no confidence” The first vote failed by 10 votes. A second a week later, lost by nine votes.

Finally, on March 20th, 1782, hours before Parliament was about to vote again, Lord North convinced King George III to allow him to resign. The king knowing that Lord Shelburne and Benjamin Franklin were friends, asked him to form a government. Shelburne, who had publicly stated he would never allow the Thirteen Colonies to become independent, refused. King George III was then forced to ask Lord Rockingham, a man he hated, to lead the government.

The new government would include Shelburne and a man he disliked intensely, Charles Fox. Rockingham’s priority was to get Britain out of a war in which she faced four enemies – us (the Thirteen Colonies, plus the French, Spanish and Dutch – and was losing.

Image is a James Gillray cartoon from 1782 courtesy of Wikipedia.

Posted in Blog, Geopolitics and tagged The end of the North Ministry sets the stage for negotiations to end the American Revolution