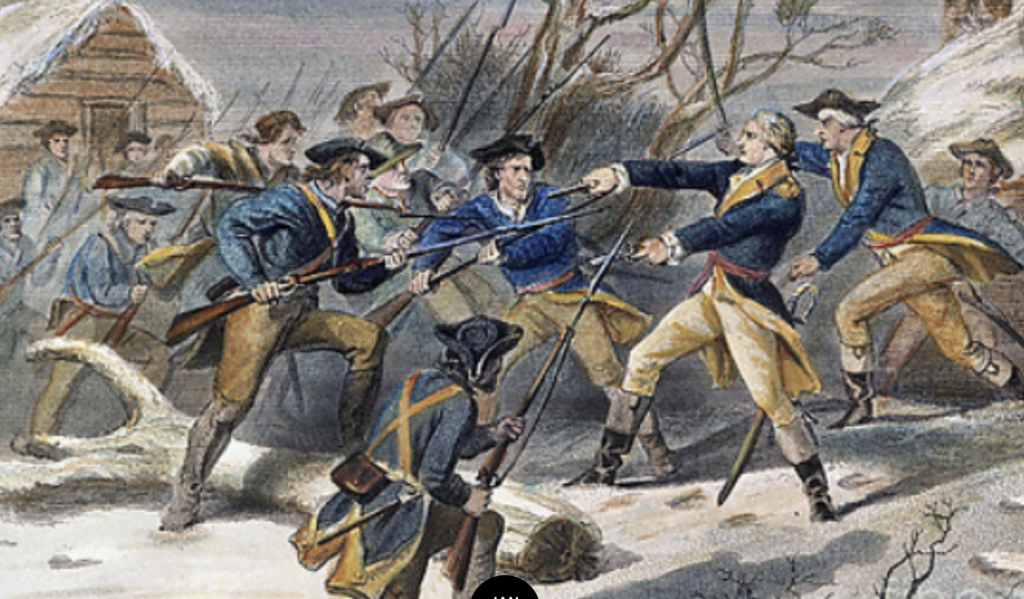 January 2nd is an anniversary of an event that most U.S. military historians would like to forget. Two hundred and forty-two years ago from the day this post is (or was) published, half of the 2,400-man Pennsylvania Line Infantry mutinied against their officers. They were spending the second consecutive winter at a place called Jockey Hollow, NJ. (See 12/26/21 post – The Hard Winter – https://marcliebman.com/the-hard-winter/ ).

Section II, Articles 3 and 4 of the Articles of War adopted on September 20th, 1776, states that the punishment for any soldier convicted of mutiny shall be death. Make no bones about it, mutinies are rare and they can be ugly.

So what happened? General Washington led his army of about 12,000 soldiers to Jockey Hollow in the beginning of November 1780 to spend the winter in the camp they built two years before. The valley is southwest of Morristown, NJ and put the Continental Army in position to quickly move against any British Army move from New York against Philadelphia.

Throughout the war, the Continental Army (and Navy) was beset by shortages of food, clothing, ammunition, and arms. The root of the problem was that under the Articles of Confederation, the Continental Congress could not levy taxes to raise money from each the Thirteen Colonies. Throughout the American Revolution, the Army (and Navy) was dependent on donations from its citizens and loans from the Dutch, French and Spanish to survive.

By January, the men were cold, starving and wanted to be paid. Part of Washington’s supply problems were made worse by the snowstorms that made roads impassable. Farmers were reluctant to part with food because they were hoarding what they had to get through the winter.

On the morning of January 2nd, 1781, the men of the Pennsylvania Line Infantry refused to follow the orders of the day. Unless they were fed and paid, they were going to Philadelphia to directly address their grievances to the Continental Congress.

Several officers tried to stop the mutineers and were killed. The commander of the troops, General Anthony Wayne tried to negotiate with them, but they refused and marched toward Philadelphia. Along the way, they way they were met by two officers sent by the British Army commander, General Sir Henry Clinton who offered the food, pay and clothing if they would lay down their arms. They refused.

In Princeton, the mutineers were met by the President of Pennsylvania who convinced the soldiers to march to Trenton where negotiations continued. A commission was formed to sort out the disputes on enlistments and promised some pay and clothing. In the spring, many rejoined the Continental Army taking the $25 enlistment bonus.

Washington’s troubles were not over. On January 20th, 300 soldiers of the New Jersey line based near modern Bloomingdale, NJ decided to follow the example of the Pennsylvanians and ask for more pay. Washington was not going to allow another mutiny to succeed. He sent a detachment from West Point who surrounded the soldiers from New Jersey who surrendered. As punishment, on January 23rd, 1781. Washington ordered two of the leaders of the mutiny executed by a firing squad made up of 12 other mutineers.

What is interesting to note is that the mutineers were not refusing to fight the British, but instead wanted the basics – food, clothing and pay. At the time of both mutinies, no one in the Continental Army knew that the victory at Yorktown was less than a year away. Unfortunately, a signed peace treaty would not be signed until September, 1783, 33 long months away.

Image portrays the conflict between Continental Army officers and the mutineers.