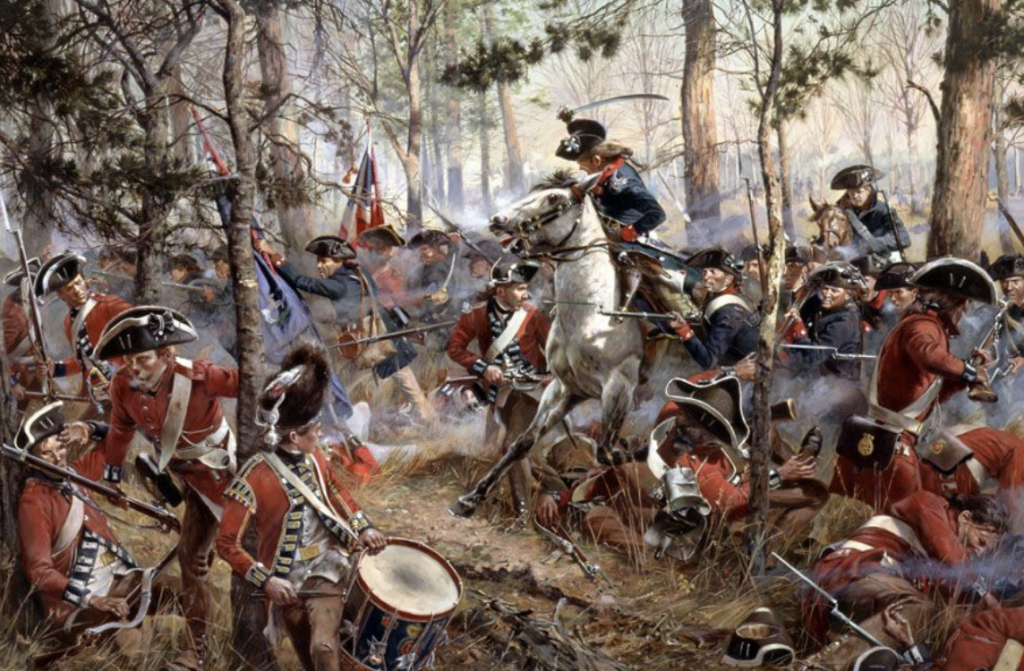 When Cornwallis marched out of Charleston, SC on January 7th, 1781, he began what became the beginning of the end of the major fighting in the American Revolution. Washington gets all the credit for the siege of Yorktown and Cornwallis’ surrender in October 1781. However, it was General Nathaniel Greene’s brilliant campaign that sent Cornwallis fleeing to Wilmington, NC. Re-supplied and reinforced, Cornwallis marched north to join with General Benedict Arnold with 1,500 men and General William Phillips with another 2,300. Phillips died of disease and Arnold was sent back to England before Yorktown leaving Cornwallis and his 8,000 men to surrender to the tune “the World Turned Upside Down.”

After the Continental Army debacle at Camden in August 1780 in which General Horatio Gates ran from the battlefield, Washington sent Nathaniel Greene south with Daniel Morgan to take command and rebuild the Continental Army. Greene arrived in the fall of 1780 and what followed the next winter and summer was one of the most masterful campaigns in modern military history. Greene waged a classic guerilla war that attacked the British Army’s supply train and rarely engaged in set-piece battles only at a time and place of his choosing.

Greene’s strategy was to keep his force intact so that no matter how much territory the British occupied, his army could always threaten the British and its supply lines. This was essentially the same strategy Washington followed. However, Greene up the ante by waging a combination of guerilla war and small set piece battles times and places of his choosing.

At Cowpens on January 17th, 1781, Greene’s Continentals and militia decimated Tarleton’s British Legion. Only Tarleton and less than 200 of his men avoided death or capture. More determined than ever to destroy Greene’s army, Cornwallis destroyed much his supply train and set off after Greene.

Several skirmishes (Cowan’s Ford, Haw River, Wetzell’s Mill) followed. During each one, the Continental Army struck and then disappeared. On March 15th, 1781, Greene allowed a set-piece battle to occur at Guilford Court House near Hillsborough, NC. The 4,500-man Continental Army under Greene outnumbered the 1,900 soldiers Cornwallis rushed to the battlefield.

Although Greene and his army was forced from the field by the British Army and is considered a British victory, the Battle of Guilford Courthouse was a strategic defeat for Cornwallis. Over 500 of the British 1,900 soldiers were either dead, wounded, missing or POWs. Greene’s losses were heavier, but his army was still intact.

Meanwhile, General Greene still had work to do. He now faced in General Francis Rawdon, one of the youngest and best generals in the British Army, and 8,000 British, German and Loyalist soldiers. Greene’s mission – free Georgia and South Carolina. Next week’s post covers Greene’s campaign to take back both colonies and push the British out.

Image is Battle of Cowpens painting by Don Trioani.

Posted in Army, Blog and tagged Greene's campaign against Cornwallis is one of the most brilliant in military history