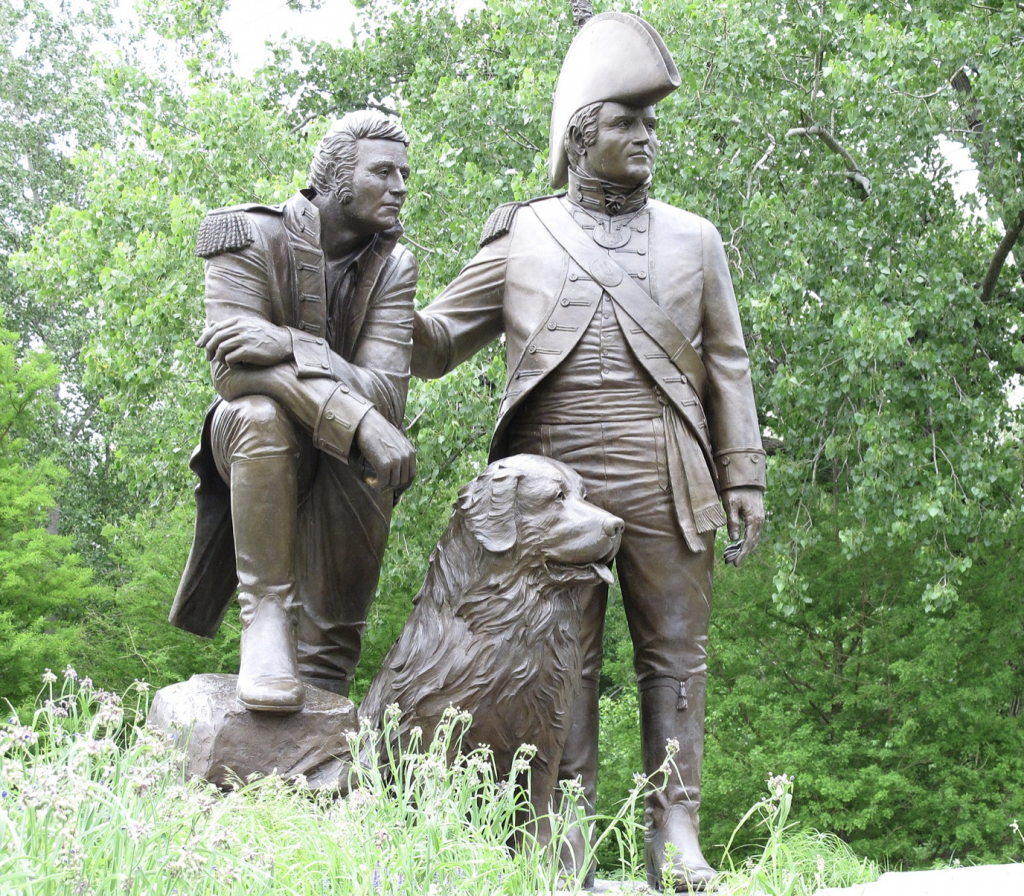 After making what we call the Louisiana Purchase, Thomas Jefferson wanted to survey the land the United States just bought from France. The land, all 828,000 square miles or 530,000,000 acres doubled the size of the United States.

Remember, in 1803, the westernmost states were Kentucky and Tennessee. Ohio had just joined the Union on May 1st, 1803. While our territory granted by the British in the 1783 Treaty of Paris gave us all the British territory south of Canada, north of Florida and east of the Mississippi, much of this land wasn’t explored, much less mapped and surveyed. Indiana, Illinois, Michigan, Minnesota, and others wouldn’t join until after the War of 1812.

Captain Meriwether Lewis and Lieutenant William Clark led what was dubbed the Corps of Discovery. Task 1 was to find a practical route by river to the Pacific Ocean. Task 2 was to establish a U.S. presence in the region on which U.S. could base its claims to the land sold to them by the French.

Understand when Lewis and Clark left St. Louis on May 14th, 1804, precious little was known about the land, its climate, and its residents. Lewis’s command consisted of 40 men who were about to venture into an unknown world. Today, the trip would be considered “high risk.”

Lewis did, however, bring what every man would insist on having and that is a dog. He paid $20 for a Newfoundland he named Seaman. He was a little over a year old when acquired and when fully grown weighed about 160 lbs.

Clark picked him since the breed were known to be good swimmers and retrievers. Throughout the trip, Seaman did just that and more.

At night, Seaman guarded their camp from intruders, man, or beast. On one occasion, he herded curious buffalo away from their food supply. Clark wrote in his journal on June 28th, 1804, “The bears come close around our camp at night but have never yet ventured to attack us and our dog gives us timely notice of their visits. He constantly keeps patrolling all night.”

The Native Americans had never seen such a large dog and several times, chiefs, offered to buy Seaman. Lewis politely, but firmly refused. On April 11th, 1806, on the return to St. Louis, Seaman was stolen by a local Indian tribe and Clark sent three men to retrieve him, by force if necessary. When the Native Americans realized they were being chased, released Seaman.

Unfortunately, Meriwether Lewis committed suicide on October 11th, 1809. At the time, he was deeply in debt, partly because the U.S. government didn’t pay the drafts he had written while governor of the Upper Louisiana Territory.

Seaman howled and pawed at the earth when Clark was buried. Observers said the Seaman’s grief was so strong, he stopped eating and later died.

For a time, Seaman’s collar was exhibited in a museum in Alexandria, VA. Under it was the inscription, “The greatest traveler of my species. My name is Seaman, the dog of Captain Meriwether Lewis whom I accompanied to the Pacific Ocean through the interior of the continent of North America.”

Unfortunately, a fire in 1871 destroyed the museum and with it, Seaman’s collar. Lewis’s journal and other documents enable us to remember Seaman and his contribution to the successful conclusion of an epic journey. Seaman was proof that dogs are man’s best friend.

Picture of the statute of Lewis, Clark, and Seaman in a park in St. Charles, Missouri courtesy of National Oceanic and Atmospheric Administration (NOAA).

Posted in Blog, Miscellaneous and tagged Clark and their best friend Seaman, Lewis