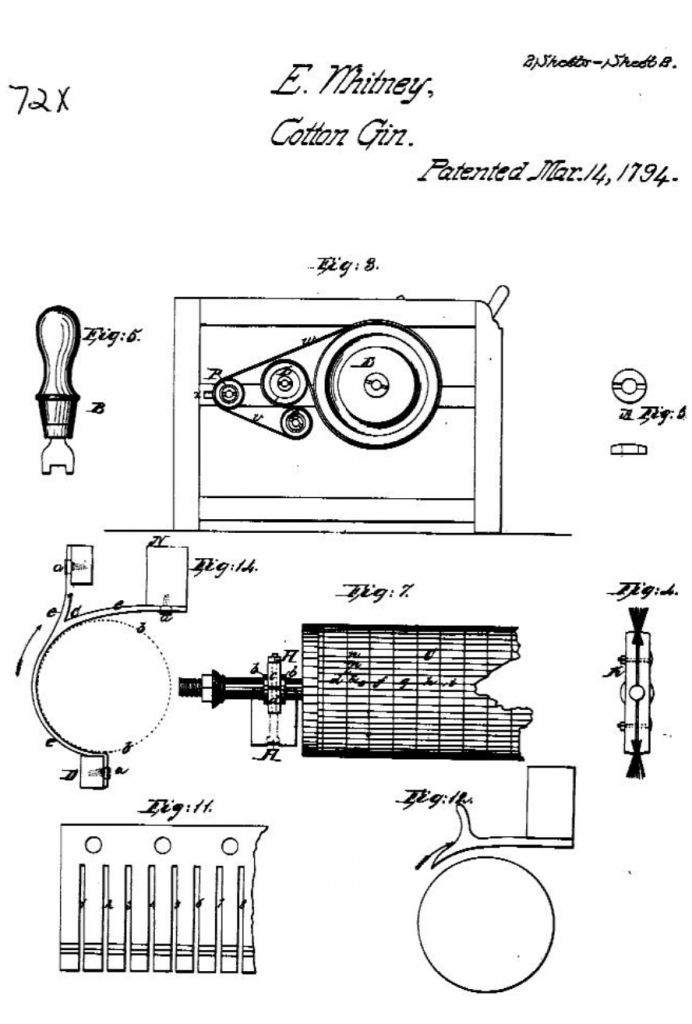 By the time the American Revolution ended in 1783, the Industrial Revolution was gathering steam. English inventions in the textile industry were making it cheaper to manufacture linen and wool based fabrics.

In 1733, John Kay invented what is known as the “flying shuttle” which enabled weavers to create wider lengths of cloth faster. Jedediah Strutt modified the weavers frame so that stockings could be made from cotton rather than silk.

James Watt, partnered with Matthew Boulton to invent the practical steam engine that could be used to power “things.” This 1762 creation reduced the reliance on power from fast moving streams and rivers. The inventions – John Hargreaves’ spinning jenny (1764); Richard Arkwright’s “water frame” (1769); “Crompton’s Mule” (1779); and the “power loom” (1785) – all reduced the time and cost to make cotton cloth came one right after another. Edmund Cartwright’s power loom (1785) coupled to a Boulton/Watt steam engine let a textile manufacturer complete all the steps needed to create cotton cloth in one factory.

However, there was one minor problem. Cotton did not grow well in England’s (or Europe’s) climate. Indian cotton was a long, expensive journey from England. With no Panama or Suez Canal, the 10,600 nautical mile journey from Mumbai to Bristol or Liverpool took, not accounting for the time needed to tack back and forth into the wind, at least 88 days at five knots.

When the American Revolution began, the Thirteen Colonies were already feeding Europe’s growing textile industry with indigo used for blue dyes and cotton. In both quantity and value, U.S. exports in 1783 of cotton were behind indigo, rice, dried fish, and tobacco.

To take advantage of the inventions noted earlier, English, and new mills in New England needed large quantities of cotton to generate a return on their owners’ investments. Enter the American south which had an ideal climate for growing cotton in the quantities needed by the English mills.

The problem was that once harvested, the seeds had to be removed from the balls of cotton to produce the lint needed for cotton thread. Without mechanization, the process was slow, labor intensive and not effective.

In the late 18th and 19th Century, farming was (and in many ways still is) a labor-intensive business. The internal combustion engine and electricity were still a century away. Practical steam powered tractors weren’t built in any quantity until the middle of the 1860s.

All of which leads us back to one of the darkest aspects of American and Caribbean history. Growing cotton was dependent on cheap labor, i.e. slaves. In the French and British held islands of the Caribbean, slaves were used to plant and harvest sugar cane and other high value crops such as coffee and cacao.

The United States needed a bloody four-year civil war that killed between 620,000 and 750,000 Americans to end slavery. Yet the aftereffects of this practice, brought on by the need to meet the demand for cotton, haunt us to this very day.

The drawing is from Eli Whitney’s patent, courtesy of the U.S. Patent Office.

Posted in American Revolution, Blog, Social and Economic and tagged Cotton became the primoary U.S. export thanks to the cotton gin