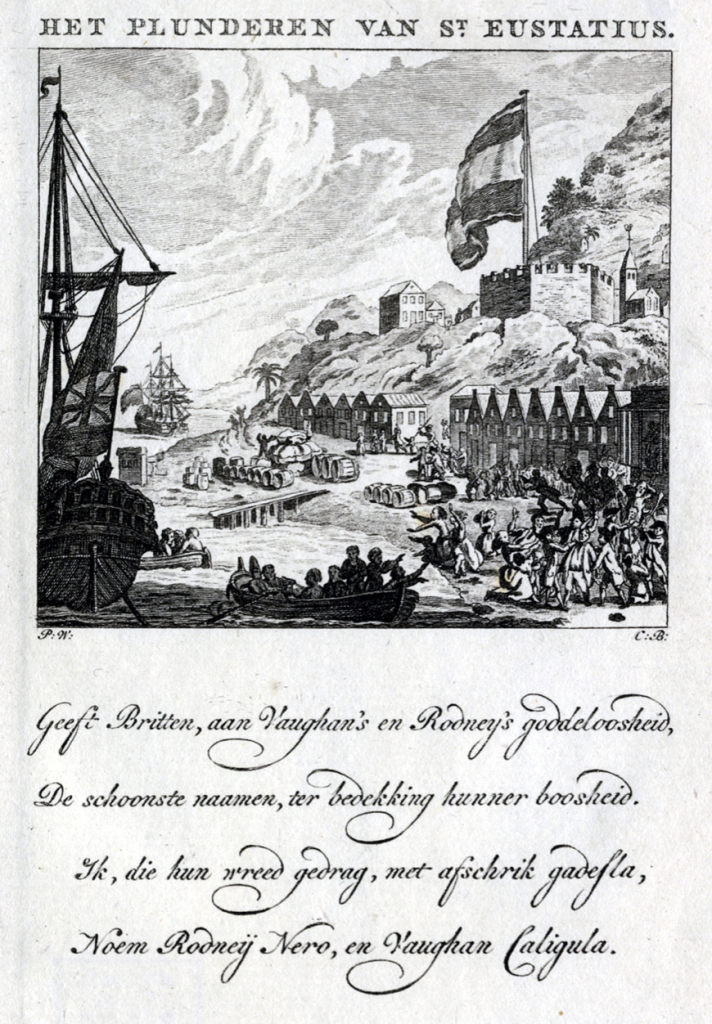 One of the more hotly contested theaters of the American Revolution was the Caribbean. American, British, French and Spanish privateers prowled the waters. The French were hell bent on recouping their losses in the Seven Years War and aggressively went after Caribbean islands held by the British.

First to fall was Dominica in September 1778. The British then took St. Lucia from the French in December 1778. France captured St. Vincent in June 1779 which was followed up by seizing Grenada in July of the same year. Many single ship battles and fleet actions were fought in Caribbean waters. One affected the land war raging in the Thirteen Colonies in ways that none of the participants anticipated.

On February 3rd, 1781, Vice Admiral Rodney and his fleet descended on the Dutch island of Sint Eustatius because the island was being used as a base for American warships and privateers. When his fleet arrived, there were 130 merchant ships anchored in the bay defended by only a small Dutch frigate and five American warships. The Dutch quickly surrendered the island.

Rodney’s orders were to follow the Comte de Grasse and the French Caribbean fleet that was headed to Chesapeake Bay to support Washington’s campaign against Cornwallis. Instead, Rodney (and his fleet) stayed in Sint Eustatius while he was personally involved in the valuation of the captured ships and their cargo. Rodney sent Rear Admiral Hood’s squadron north.

Had Rodney went north, the Royal Navy would have outnumbered the French Navy at the Battle of the Chesapeake. Had he done so, the outcome of Yorktown may have been different.

While at Sint Eustatius, Rodney decided to loot the island’s large Jewish community. First, he extorted money from the wealthy Jewish merchants, going so far as having them strip searched and their clothes ripped open to make sure they were not hiding money or valuables. Finding none, he ordered graves to be dug up hoping to find money, gold and jewelry. None were found and the anti-Semitic Rodney ordered Sint Eustatius’ wealthiest Jews taken to prisons on St. Kitts. British control of the island lasted only 10 months and eventually, all the deported Jews returned to the island.

Rodney’s actions at Sint Eustatius were condemned publicly in Parliament which demanded an investigation into the Rodney’s actions. Lord North, the prime minister, left Rodney in command of his fleet and operations in the Caribbean.

Rodney’s avarice and greed didn’t pay off. Most of the ships were recaptured by the French on the way back to England and the prize money Rodney received was a pittance compared to what he anticipated.

Cornwallis’ defeat led to the fall of Lord North’s government and the start of peace negotiations in March 1781. Lord Rockingham’s new government demanded Rodney be relieved for cause. Before the orders arrived, Rodney decisively defeated the French and Spanish Navies at the Battle of the Saintes and stopped a Franco/Spanish invasion of Jamaica.

After Rodney’s victory, the French secretly opened negotiations with the British. Buoyed by the Saintes’ victory, the British changed their position on what concessions they would grant to the Americans in a peace treaty. The Battle of the Saintes saved Rodney’s career because when he returned to England, he was given a peerage.

Image is a Dutch engraving comparing Rodney’s actions on Sint Eustatius to Caligula and Nero.