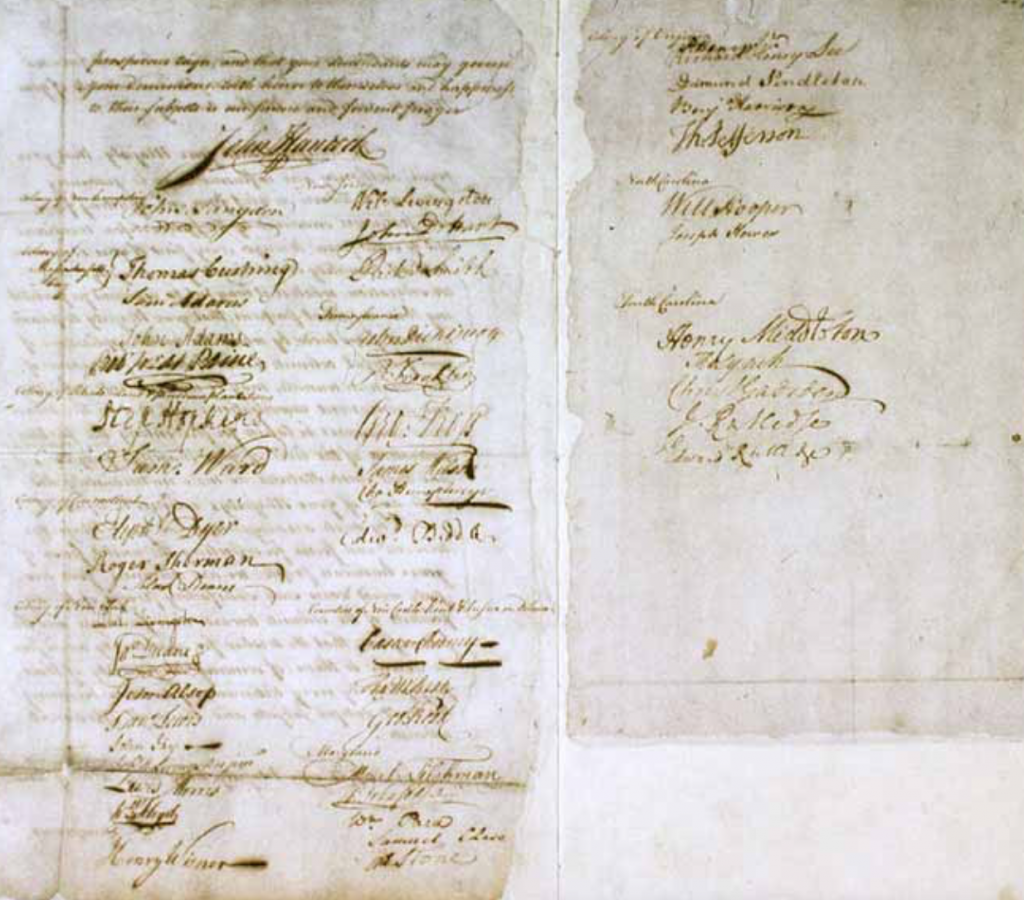 On February 20th, 1775, sensing that war might break out in the Thirteen Colonies, Lord North ushered through Parliament a resolution he thought would prevent a rebellion. The act known as The Conciliatory Resolution stipulated that any of the Thirteen Colonies that contributed to the common defense of the colonies and did not rebel would be exempt from any taxes other than import duties and tariffs.

A letter was explaining the resolution was sent to each colonial legislature and the Second Continental Congress. The letter was ignored.

After the fighting started at Lexington and Concord on April 19th, 1775, there were some in the Second Continental Congress who believed that we could not win a war with England. Led by John Dickinson, the Olive Branch Petition was originally written by Thomas Jefferson. Dickinson thought it too “radical” and rewrote the document which was passed on July 5th, 1775 and sent to King George III. The king and parliament ignored the petition that said the colonists were upset with his ministerial policies which led to the colonies desire to be independent.

Admiral Lord Howe was appointed as King George III’s Peace Commissioner in 1776 right after he defeated Washington at the Battle of Long Island. In what is known as the Staten Island Conference, Howe met with Benjamin Franklin, John Adams and Edward Rutledge. The Americans insisted on full independence and Howe said he was not ‘authorized’ to grant independence. Within days, he resumed his campaign against the Continental Army.

In 1777, after Burgoyne was defeated at the Battle of Saratoga, Lord North managed to have Parliament repeal The Tea Act and the Massachusetts Government Act which revoked the colony original charter granted in 1691. The members of the Second Continental Congress saw this as much too little and way too late.

Lord North was afraid a Franco-American alliance would become a reality and sent Fredrick Howard, the 5th Earl of Carlisle, and two others to negotiate with the Americans in early 1778. The British offered trade concessions, debt relief and limited self-rule. The Carlisle Peace Commission was the first official British recognition of the Second Continental Congress as the ruling body of the Thirteen Colonies. The Congress rejected the offer because Howard said he was not authorized to grant independence.

Howard’s failure led to the British shift to its southern strategy to force Washington to divide his army so the British could defeat him piecemeal. In 1780, the British commander in North America, General Sir Henry Clinton and his Royal Navy counterpart, Vice Admiral Mariot Arbuthnot were appointed as “Commissioners to Restore Peace to the Colonies and Plantations in North America.” They offered a pardon to any colonist who had rebelled or was rebelling against English rule. The offer fell on deaf ears.

Which brings us to the beginnings of peace negotiations that started with Richard Oswald and an American prisoner in the Tower of London, Henry Laurens. Oswald was a close friend of the opposition leader in Parliament, Lord Shelburne and had been meeting the Laurens in his ‘two room suite’ in the Tower of London. (see Blog Post The Rocky Road to Peace – https://marcliebman.com/the-rocky-road-to-peace-talks/). With Shelburne’s approval, the two men hammered out the beginnings of a peace agreement.

Unfortunately, Shelburne was powerless to offer peace or independence to the Thirteen Colonies until Lord North’s government fell. Finally, in March, 1782, the North Government fell paving the way for negotiations to officially begin.

Image is the signature page of the Olive Branch Petition. Note John Hancock’s name at the top. Source – Wikipedia

Posted in Blog, Geopolitics and tagged England refused to recognize that only full independence would end the war