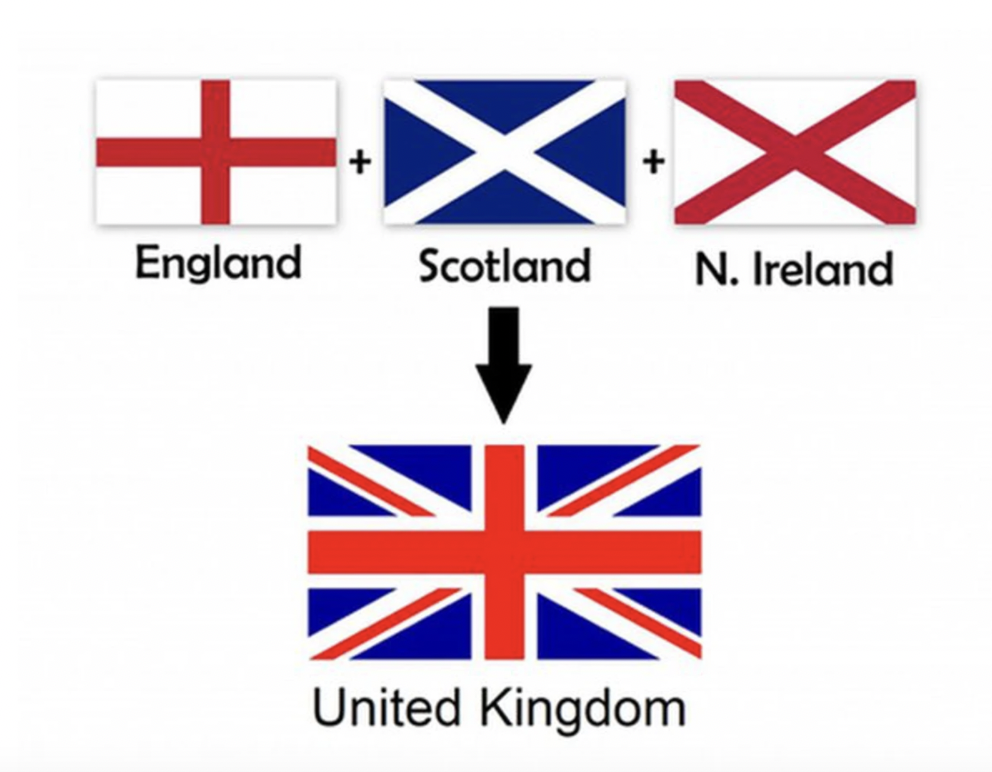 Most Americans use the words England, Britain, United Kingdom, Great Britain interchangeably to describe the country the Thirteen Colonies fought for eight long years to win independence. The reality is that our Founding Fathers fought a country officially known as Kingdom of Great Britain, not England and not the U.K. In the War of 1812, we fought the United Kingdom of England, Ireland, Scotland, and Wales.

If one was educated in the United Kingdom of England, Ireland, Scotland, and Wales, you might know or remember the history. For the rest of us, for the period of 1775 to 1815, the following falls into the category of knowing your adversary’s name.

As a country, the country began on July 12th, 927 when the Kingdom of England was formed by uniting the Anglo and Saxon tribes. Athelstan managed this feat in a country that was the lower half of Britain.

In 1536, Henry VIII, he of six wives fame, united England and Wales into one country with the same laws, taxes, and government. He called it the Kingdom of England and Wales. He was also proclaimed King of Ireland during his reign.

Fast forward 1 71 years to 1707, to when Queen Anne added Scotland so the Kingdom of Great Britain now included, England, Scotland, and Wales. The English and Scottish parliaments, legal systems and economies were merged.

The country Queen Anne created is the official name of the country we fought for independence. We tend to use England as the name of our opponent, but Great Britain would be much more accurate. England, as you’ll read later, is just one “state” within the kingdom.

Which brings this post to 180o. Through what is known as the Act of Union, the Irish parliament is merged with the British parliament to further cement the union that began in 1541 under Henry VIII.

With Ireland now part of Great Britain, King George III renamed his country the United Kingdom of England, Ireland, Scotland, and Wales. This remained the country until 1922 when Ireland, less Northern Ireland, withdrew from the union.

For us Colonials, each member of the United Kingdom should be thought of akin to one of our states. Wales, Scotland, and Northern Ireland but not England all have their “local” Parliament to manage local affairs within the national government structure.

Britain is the island that contains England, Scotland, and Wales. England is the portion of the island east of the Welsh border and south of the Scottish border. Scotland is the northern part of the island and Wales is the bulge that sticks into the Irish Sea on the west side of Britain.

Confused? Allow me to add to your consternation…. We tend to think of the U.K. as the two large islands – Ireland and Britain – not the 6,000 islands that make up the British Isles which are all part of the United Kingdom.

Some of them are famous, e.g., the Isle of Man (known for its motorcycle and auto races); the Orkney’s (for the Royal Navy base at Scapa Flow); and the Channel Islands of Guernsey, Jersey, Sark, and Alderney which were the only sovereign English territory occupied by the Germans in WWII. The Isle of Wight, Isles of Scilly and the Shetlands are other well-known island groups.

So when it comes to flags, we kept changing ours to include additional stars as new states were added. The Union Jack is a combination of the Cross of St. George (England), Cross of St. Andrew (Scotland) and Cross of St. Patrick (Ireland). Its hasn’t changed since the days of Queen Anne and is red, white, and blue, just like ours. Wonder where our founding fathers got the color scheme for our flag?

Just thought you might want to know for the next time you play Trivial Pursuit.

Image shows how the flags of England, Ireland, and Scotland became the Union Jack.