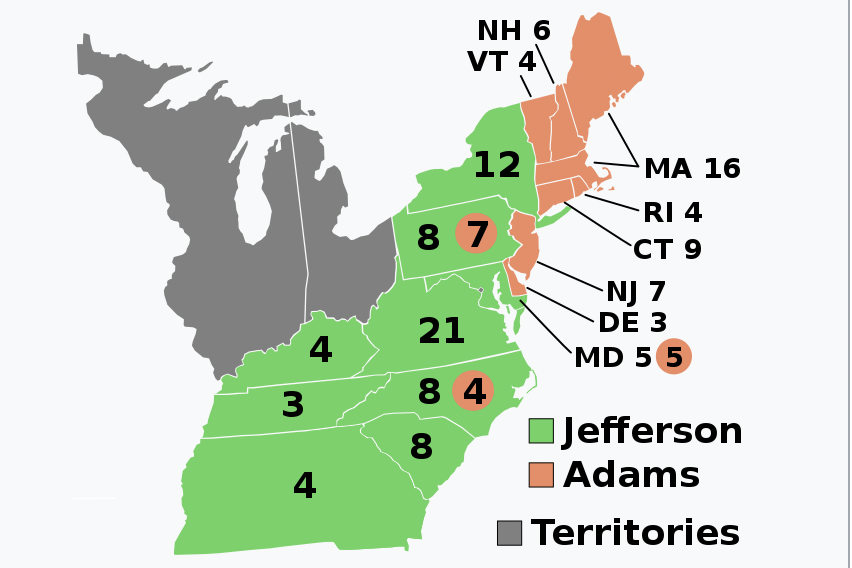 The year was 1800 and Thomas Jefferson from Virginia and Aaron Burr from New York campaigned against John Adams from Massachusetts and Charles Pickney from South Carolina. Democratic-Republicans faced off against the Federalists. Northerners were pitted against Southerners. Former allies during a long war that led to independence were now at each other’s throats.

Men willing to compromise to write the U.S. Constitution in 4 months were now writing vitriolic letters about their former friends, allies, and comrades-in-arms. Feeding the animosity with hype was an uncontrolled press that favored Jefferson.

The nastiness is exemplified by Martha Washington’s letter to a friend. In it, she wrote, “The two worst days of my life were when my George died and when Jefferson was elected president…”

What was at stake were enough electoral votes to give the winner a majority. The United States of America now had 16 states – Vermont joined in 1791, Kentucky in 1792, and Tennessee in 1796.

Back then, the candidate with the most electoral votes became the president, the second-place finisher, regardless of the party, became the vice president. The issues were ones we still debate today:

Immigration – who should be allowed to come into the country and what was the path to citizenship)?

Foreign policy – war was raging in Europe and do we pick sides? If so, which country(s)?

Defense – how much should we spend and on what?

Taxes – who should pay and how much?

In the popular vote, Jefferson won 69.5% and Adams won 39.4%. Now the electors had to cast their ballots. Under the Constitution, the electors were members of the House and Senate. They voted based on the vote in their states and Congressional districts.

However, in the background, Jefferson and his Democratic-Republicans members of the House and Senate had made a deal. They would cast their votes so that Jefferson would receive one more electoral vote than Burr. This would give the Democratic Republicans both the Presidency and the Vice Presidency.

In the first ballot, both Jefferson and Burr received 73 votes. According to Article II of the Constitution, choosing the President now goes to the House of Representatives where the Federalists had the majority. After 35 secret ballots, none of the candidates – Jefferson, Adams, Burr, or Pickney – had a majority and voting had dissolved into party politics. Democratic-Republicans voted for Jefferson or Burr and the Federalists wanted either Adams or Pickney.

Burr started courting Jefferson’s supporters to take the election from Jefferson. Alexander Hamilton saw an opportunity. He favored Jefferson over Burr and convinced several of his fellow Federalists to support Jefferson because it was clear Adams would not win a second term.

By doing so, Hamilton avoided a Constitutional crisis. The compromise orchestrated by Hamilton eventually led to the 12th Amendment of the Constitution in which Aaron Burr would play a major role in its passage in 1803.

Image is the electoral map of 1800 by Andy Hogan